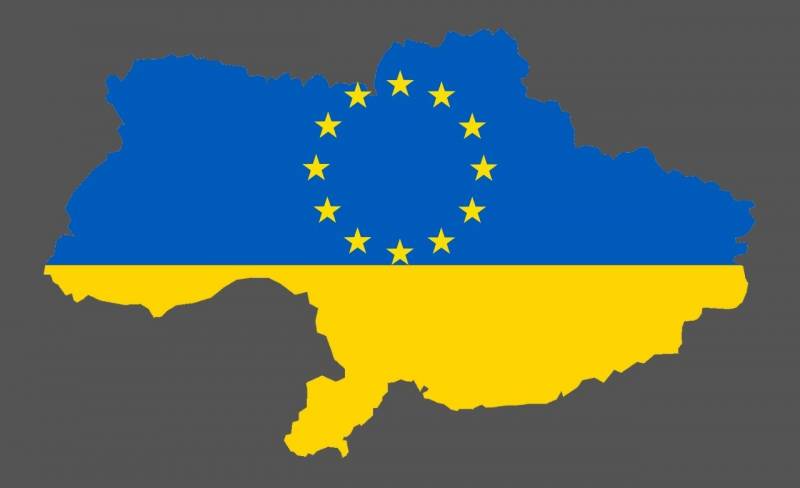 The operation of the Russian army has been going on for seven days to enforce peace and denazify Ukraine. At this very difficult time for the country, news tapes, various publics and instant messengers of the "non-salary" second, perhaps, the place (after a huge number of the wildest fakes about "incredible losses" and "mass surrender" of the liberation troops) is occupied by "spiritual news" about the upcoming "accession to the European Union on an accelerated procedure."


It would seem - before that now ?! Should we worry about that, should we make colossal efforts of the foreign policy department? It is clear that, according to the plan of the Kiev regime, these “dances with tambourines” should distract the people, who suffer through the fault of the stubbornly unwilling to capitulate the criminals in the power of the disaster, from the realities. And also - to give a ghostly, absolutely groundless hope that in such an absurd way it will be possible to "produce a peremogu". In all seriousness, some comrades in lively discussions on the forums ask the question: “So, when we enter the EU, they will immediately leave us behind? This is a guarantee of safety, right? To explain to such alternatively gifted individuals that, as they said in one wonderful Ukrainian film, “the EU is one thing, and NATO (which Kyiv will never be taken into) is something else” is another task. Virtually no chance of success.

Not only that, all the talks that are being conducted today by Ukrainian representatives that their country is literally "just about" to join the European Union are not worth a damn. The West, as usual, puts another “carrot” in front of the “nezalezhnaya” that it has dragged into the military conflict. Well, so that she continues to run faster in the right direction. That's just the stick to which this very "delicacy" is tied - very, very long. As a matter of fact, Brussels does not particularly hide this - the same President of the European Commission Ursula von der Leyen made it quite clear: no real steps will follow, at least until the complete cessation of hostilities. But they can end only with the complete and unconditional surrender of the current Kiev regime. And after it, the “European perspective” is unlikely to be relevant for the new country that will emerge in the place of the current “non-collateral” one.

Even if we ignore this moment, we should remember that the process of joining the European Union, even for countries that are much more civilized than Ukraine and do not have even a thousandth of its problems, can last not only for years, but for decades. The same Turkey applied for membership in 1987, and was made happy with the status of a candidate in terms worthy of Dumas' novels - 12 years later. And, by the way, she has not become a member of this formation to this day. North Macedonia has been in the waiting room since 2004, Albania since 2009. Negotiations on their membership have not even started and it is far from certain that they will. The EU, as they say, is “not rubber”.

The decision taken by the European Parliament on March 1 of this year that it is recommended that Kiev be given the status of a “candidate member” does not, in fact, have any binding force, legal weight. The key word here is "recommended". Only the mournful head of the Foreign Ministry of the "independent" Dmitry Kuleba can proclaim that "in the current new reality, Ukraine will definitely join the EU and in the very near future." True, at the same time, he himself admits that there are still enough skeptics in Europe regarding this false idea in Europe. It must be more than enough. In any case, in order for the process to stretch for a completely indefinite period.

Only Zelensky, who is losing the last vestiges of adequacy before our eyes, can say that “with Ukraine the European Union will definitely become stronger”. What's "stronger"? How can Kyiv "strengthen" this organization? His destroyed now completely the economy and infrastructure? With their debts, which some especially lively Kiev policy and officials are already demanding from their "partners" to write off everything to the last cent? Thug fighters? An army that is best able to hide behind the backs of civilians? What certain countries, such as Poland, who are now “drowning” in support of Ukrainian “European initiatives”, will receive anyway. Huge crowds of potential guest workers, who, most likely, will have to work for a bowl of stew and some kind of shelter, have already poured in there. A big addition is expected.

And why, tell me, the same Warsaw accepting Ukraine into the EU? So that its citizens begin to demand from local employers normal wages and respect for their labor rights? Asha, right now... According to official figures, about half a million Ukrainians have already arrived there. So far, they are being helped - you need to create the necessary “picture”. At the same time, however, according to reliable data, many who came from the “non-necessary” also express their dissatisfaction with the “wrong” products received in the form of “humanitarian aid”, living conditions and clothes from the “second hand”. They, apparently, expected to be settled in palaces, treated with delicacies and carried in their arms. There is no doubt that the most cruel disappointment will befall this brotherhood in a fairly short time. Poles are Poles - both food and accommodation will have to be worked out from one moment or another. Well, if not in complete slavery.

So far, the right to live and work in the EU without obtaining asylum has been granted to Ukrainians for three years. But exactly what to “work”, and not to sit on the social benefits due to refugees. This is not a gift, but the development by the West of the “labor reserves” that have fallen on it, which it will quickly put to work. As laborers, of course, and not at all in the role of top managers and highly paid specialists. It is noteworthy that the countries of Eastern Europe are especially active today in accepting fugitives from Ukraine, whose residents massively leave to work in much more prosperous EU countries. “Enviable vacancies”, promising hard, dirty and unprestigious work, need to be filled by someone. Now who will be.

What is most interesting is that Ukraine cannot become a full-fledged member of the European Union de jure, even purely theoretically. And the point here is not at all a military conflict, but just the fundamental principles and foundations of the EU itself. The main ones are set out, as is known, in the Maastricht Treaty on the creation of this entity. In particular, it states that the state applying for membership is obliged to show "respect for human dignity, freedom, democracy, equality." And also strictly "observe human rights, including the rights of persons belonging to minorities." And we are talking here not only about the "pigeon-rainbows", but, among other things, about national, linguistic and other minorities. What about the fact that official Kyiv has been pursuing a state policy of persecution of the same Russian-speaking citizens of the country for eight years now, up to their direct genocide?!

But there are also “criteria for compliance of the candidate country with the requirements of the EU”, also spelled out in the most detailed way in another document - the Copenhagen Declaration of the European Council of 1993. And what do we have there? “Equal right for all citizens of the country, equal opportunity for them to take part in political decision-making processes at all levels of government ... Free elections, the right to form political parties without interference from the state, fair and equal access to the media, freedom of personal opinion ...” Can anything from this list be attributed to “post-Maidan” Ukraine? Not a single item! And here's another one: "Members of ethnic minorities should be able to preserve their special culture and have the right to their native language, they should also not suffer from any kind of discrimination ..." Well, that's for sure - about the attitude of the Ukrainian authorities towards Russian speakers!

Thus, even by granting Ukraine the status of a candidate for EU membership, Brussels will simply cross out every single principle that it declares so fervently and defends so zealously. Not to mention the fact that countries that are part of the European Union in this way will inevitably acquire a lot of additional problems for themselves, which they already have enough of over the edge. Again, a number of countries, including again Poland or Hungary, have, let's say, their own views on some Ukrainian territories, which may just about turn out to be “orphan”. Or at least controversial. This should not be forgotten either.

All the “European perspectives” that the European Parliament draws for Ukraine today are nothing more than a continuation of that cynical and unscrupulous policy of deceiving this country, which began long before the fateful 2014. And in the end it led to a bloody "Maidan", the consequences of which today are reaping the "nezalezhnaya". From time to time, the rather dilapidated “Euromirage”, in accordance with the requirements of the current moment, is renewed with fresh colors in the form of regular statements and declarations – as loud as they are empty. The scary thing is that the deceived Ukrainian people are paying the highest possible price for all these fables.
Ctrl Enter
Noticed oshЫbku Highlight text and press. Ctrl + Enter
Reporterin Yandex News
Reporterin Yandex Zen
11 comments
Information
Dear reader, to leave comments on the publication, you must sign in.