Military operation in Ukraine: Working on the first mistakes 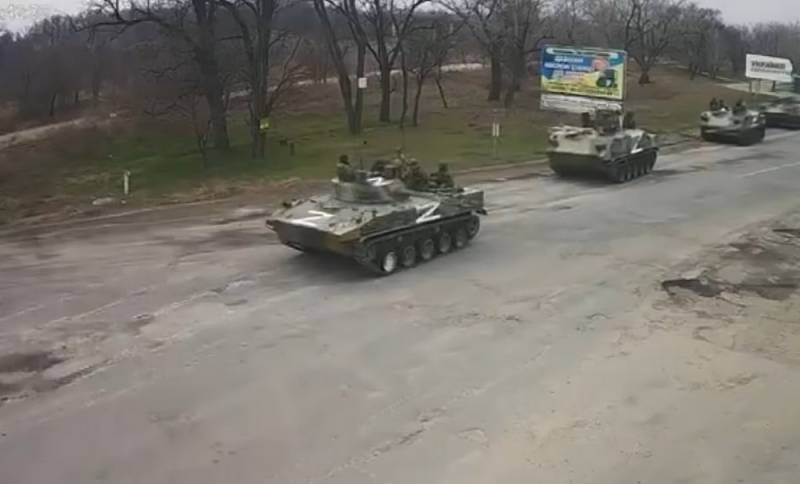 The sixth day of Russia's military operation to force Ukraine to demilitarize and denazify has arrived. A number of important tasks have already been achieved, but so far everything is not going as easily and smoothly as many would like. Ukraine, to put it mildly, was slightly underestimated, and the matter is complicated by the fact that the Russian Defense Ministry voluntarily assumed obligations to act “in white gloves”, that is, as humanely and respectfully as possible to its opponent. It is clear that the Kremlin has made a number of grave mistakes that need to be corrected while it is still possible to do so.

Now it is not customary to talk about this directly, but the cause of all today's problems in Ukraine and Russia lies in 2014. At that time, at least half of the population of Nezalezhnaya was pro-Russian, and Novorossia itself asked to join us as part of the Russian Federation, following the Crimea. It was enough to provide assistance to the legitimate President Yanukovych, and the Maidan project would have been curtailed according to the Belarusian or Kazakh scenario. There would be no water blockade of Crimea, no 8 years of constant shelling of the DPR and LPR, no severance of industrial ties with Russia, no long-term propaganda pumping of Ukrainians, no strengthening of the Armed Forces of Ukraine, who finally learned how to fight. Alas, this was not done in a timely manner, and now this 8-year-old inaction has to be paid with great bloodshed on both sides and grave economic sanctions, the effect of which will soon make itself felt.

But what to do now that the military operation has begun? Stop the offensive, agree on some kind of compromise with Kiev and go home?

Unfortunately, there is no way back. Now we are officially an "evil empire", and the fraternal Ukrainian people now hate us fiercely. No one will lift the imposed Western sanctions. After the withdrawal of Russian troops, NATO will enter Nezalezhnaya. Strike missile weapons will appear there with a 100% guarantee. If the Kremlin again stops halfway, without bringing the matter to its logical conclusion, namely, the complete and unconditional surrender of Kyiv, this is fraught with subsequent profound shocks in Russia itself, up to the collapse of our country. So the Japanese started talking about the annexation of the Kuriles.

The situation has reached such a stage that it is impossible to take a single step back, despite the fact that the path ahead will be very difficult. And now it is necessary to talk about the mistakes already made during the military operation and whether it is possible to try to correct them somehow.

What is all this for?

In announcing the start of the military operation, President Putin referred to Russia's right to self-defense and set the goal of denazification and demilitarization of Ukraine. The past 5 days have shown that this was clearly not enough. Many Ukrainians did not perceive this as a liberation operation. Also, the reasons for what is happening were not understood by many of our compatriots who do not understand anything in policy, neither in the economy, nor in military affairs. They just feel sorry for their relatives in Ukraine and feel sorry for themselves, because it is already clear that the sanctions will hit hard on the wallets of ordinary Russians.

The Kremlin's huge mistake was not to explain to the Ukrainians exactly what the Russian troops are trying to achieve. What kind of denazification is this? Who specifically will be held accountable? The name of the “bloody pastor” Turchinov has already been mentioned, but I would like to hear in advance the entire list of the main potential defendants. Even worse, the Russian authorities do not feel the need to talk to ordinary Ukrainians in an attempt to explain what the Kremlin's ultimate goal is.

What kind of Ukraine does Moscow want to see in the end? Federal or Confederate? What powers will the regions receive after the reform? How will economic relations and military relations be built?technical cooperation? Will Russian be the second state language? Who can lead the country during the transitional period?

In other words, no constructive agenda, the need for which we have long they said, The Kremlin initially did not offer the Ukrainians. So is it any wonder that they behave like in the “Patriotic”, perceiving for the most part Russian soldiers far from being allies?

Another mistake that follows directly from the first is the emphasis on the use of the Russian army. Literally on the eve of the announcement of the decision to start a military operation, we they said that it would be more correct if the Ukrainians themselves fought for Ukraine, albeit with the support of the RF Armed Forces. After the recognition of the DPR and LPR, on the basis of the militia and Russian volunteers, including from the "vacationers", it would be possible to create the Liberation Army of Ukraine. The confession unleashed the hands of the Kremlin, which was given the opportunity to provide it with any weapons. In the same place, in Donetsk, it was worth placing an alternative government of the new Ukraine.

If done wisely, it would be the Liberation Army of Ukraine that would conduct military operations, and the Russian army would simply help as an ally, occupying the liberated territories. You look, and there would be no such powerful sanctions, although they, of course, would still be. Now for everyone we are "interveners and occupiers."

The day before, a certain Manifesto on the formation of a new state, the Federal Republic of Ukraine, was published in the media:

We, the free people of Kharkiv, Mykolaiv, Sumy, Chernihiv and other regions of Ukraine, declare and proclaim the formation of a new democratic state, the Federal Republic of Ukraine…

Our goal is to unite all the peoples of Ukraine who do not want to put up with the domination of neo-Nazism and bloody crimes on our land.

Our goal is to create a democratic federal state and carry out complete denazification and debanderization, introducing criminal liability for the rehabilitation of Nazism.

Our goal is to create a democratic federal state where every nation can speak its own language. The number of state languages ​​is not limited.

Our goal is to create a democratic federal state, where the main goals will be to ensure human rights and freedoms.

Our goal is to create a democratic federal state where freedom of religion will be ensured and the independence of the Church from the state will be guaranteed.

Our goal is to create a democratic federal state and punish war criminals who are guilty of unleashing a civil war and mass bloodshed.

Our goal is to create a democratic federal state with a free market economy.
Our goal is neutrality and friendly relations with all states of the world.
Now, this already looks like some kind of adequate political program. Note that the document mentions those Ukrainian regions where Russian troops are already stationed. If Moscow publicly supports the initiative, then the part of Ukrainian society that has retained its sanity will see that it has nothing to fight against. And this will be a true and correct step towards establishing peace in this unfortunate country.

As for the military component, it is not too late to start creating the Liberation Army and the People's Militia. The fact is that the Russian grouping is seriously inferior in number to the Armed Forces of Ukraine and other paramilitary structures of Ukraine. The General Staff of the Armed Forces of the Russian Federation relied on the encirclement and neutralization of the most combat-ready grouping of the Armed Forces of Ukraine in the Donbass, as well as on the encirclement and forcing the surrender of Kyiv. The Russian military is not trying to take major cities seriously, only those that are needed for free movement across the territory of the Independent. In general, from the point of view of humanity, the approach is correct. However, it also has its downside.

150 Russian troops are clearly not enough to control a huge country with an unfriendly population the size of France. At a critical moment, units of the Armed Forces of Ukraine and the National Guard can leave the cities where they hid behind civilians and strike in the back. Under no circumstances should this be allowed. Since the Kremlin decided to carry out a military operation by the forces of the Russian Ministry of Defense, it is necessary to create an alternative Ukrainian army and the People's Militia to the Armed Forces of Ukraine.

Under our control, armed structures should appear, consisting of local volunteers who are close to the idea of ​​​​the emergence of the Federal Republic of Ukraine. It is they who will have to block those settlements where the enemy has settled, negotiate with them on the surrender on the rights of “their own”, be responsible for order in the liberated territories, where they will have to catch gangs of marauders armed by President Zelensky. This will also allow the Ministry of Defense of the Russian Federation to protect its rear and free up forces for operations in the main areas.
Ctrl Enter
Noticed oshЫbku Highlight text and press. Ctrl + Enter
Reporterin Yandex News
Reporterin Yandex Zen
78 comments
Information
Dear reader, to leave comments on the publication, you must sign in.