Biden miscalculated the strength of the "most powerful army in Europe" 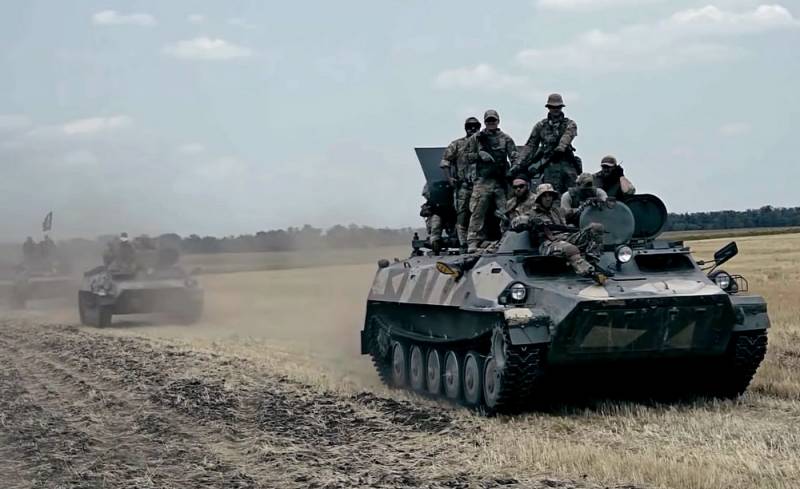 In one of his speeches, Biden said that pro-Western Ukraine does not suit Putin and, since the “Minsk format” has reached a dead end, he plans to solve the problem by force of arms. An analysis of the situation at that moment showed that this was the most unlikely scenario, and such statements were part of a large-scale hysterical information campaign. Conducting a military operation in Ukraine, in all objective parameters, contradicted the foreign policy of the Russian Federation and the interests of the business community, which has a certain influence on policies states. However, it turned out that Biden was right, Russia decided on a military operation to overthrow the Nazi Kiev regime. Let's figure out how it happened that for the first time in recent history, a US president gave a correct forecast and for the first time in recent history, Russia has shown offensiveness in foreign policy.

General historical context of the situation

The United States, having become the only superpower in the world after the unexpected collapse of the USSR, began to methodically strengthen its influence in Eastern Europe. In the 1990s, the US leadership believed in the "end of history" and in the eternal hegemony of the Pan-American order, but the introduction of the euro and the forced consolidation of European countries in the EU created a hypothetical threat to their dominance. Therefore, a bet was made on the Baltic states and the former countries of "people's democracy", in which the regimes most loyal to the United States were established, turning their states into essentially satellites of America.

By the beginning of the XNUMXst century, the strengthening of the Russian state and the Russian economics. The pro-Western course of the Russian Federation began to gradually tilt towards sovereignty. This gave rise to an aggressive US policy of exporting color revolutions to Eastern Europe in order to strengthen the chain of hostile states near and already immediately around the Russian borders. The first to fall was Yugoslavia, in which NATO was unleashed a criminal war, then Georgia, Ukraine, Kyrgyzstan, Armenia. In these countries, with the help of simple political technologies, nationalists loyal to the United States seized power, which was presented as promoting democracy. The most difficult and multifaceted situation has developed in Ukraine, the largest country of the former USSR after Russia, where the first Maidan suffered a temporary defeat due to discord among pro-American politicians. In 2014, against the background of the deepest political and economic crisis and the split of society, a new orange revolution was inspired, which ended with the overthrow of power and the establishment of one of the most reactionary, nationalist, anti-communist and anti-Russian regimes.

Firstly, the Russian leadership considered that if they did nothing, the new Kyiv authorities would sooner or later deprive the Russian Federation of the Black Sea Fleet base in Crimea to please NATO. And this contradicted the foreign policy ambitions of the Russian leadership. Therefore, the historical misunderstanding of the peninsula being part of Ukraine was quickly and painlessly eliminated. Moreover, the objective basis for this - the will of the people of Crimea to reunite with Russia - was evident.

Secondly, it was in Ukraine that there were people who did not accept the new pro-American government with an outright fascist physiognomy and decided to defend their right to self-determination with arms in hand. A painful civil war began in the Donbass, during which two people's republics were created. But the Russian Federation was in no hurry to either recognize the LDNR or provide them with large-scale military assistance. The three "great powers" of Europe froze the civil war for eight years, creating favorable conditions for the punitive Nazi battalions to swagger, daily shooting the population of Donbass from mortars and artillery pieces and cutting off the heads of the captured defenders of Donbass.

The leadership of the Russian Federation, with persistence worthy of a better use, insisted on the return of the rebellious Donbass to Ukraine, apparently hoping that the Maidan authorities would evolve into some more acceptable, compromise forms. However, the situation developed in exactly the opposite way - the oligarch Poroshenko was replaced by the comedian Zelensky, and the reactionary nature of power increased sharply. In Kyiv, a regime of a thinly disguised terrorist dictatorship of nationalists tied to the CIA was established.

At the same time, US global hegemony was rapidly fading away. The campaign to overthrow Assad failed, the American military was gradually pushed out of the Middle East, Turkey raised its head, Europe played tricks, color scenarios increasingly failed, the trade war with China led to the expected results, and the Taliban created with the assistance of the CIA (banned in the Russian Federation) expelled USA out of Afghanistan and overthrew the pro-American regime in the country. Colors began to thicken over the American world order. Under these circumstances, the United States decided that the best way out would be to declare a new cold war to its main rival - China - under the sauce of the "communist threat", which was supposed to rally the allies and force neutral countries to choose which side they are on.

Russia has found itself at the center of a US strategic plan to encircle China. A policy of unprecedented pressure on the Russian Federation in all areas has begun. And the sanctions here played a secondary role. The United States organized powerful pressure on the Russian government from within, using the liberal opposition. They played several political combinations designed to undermine the situation - Belomaidan and the poisoning of Navalny. At the same time, the negotiation process was actively going on, the actual content of which could only be guessed at.

As a result, the goals set by the US leadership were not achieved, Russia did not sag under pressure. Moreover, having intercepted the negotiating initiative, Putin publicly put forward demands to the United States to withdraw from Eastern Europe.

At this stage, a provocation from the United States arose at the most painful point - in the Donbass. An intensive pumping of the Armed Forces of Ukraine with weapons, massive shelling of the LDNR and propaganda of the Russian threat began. The United States has chosen the tactic of confrontation between Ukraine and Russia, hoping to turn the Square into "Afghanistan for Russia." And along the way, hoping to redistribute the European gas market.

Based on the logic of the behavior of the Russian Federation, the conclusion was that Putin would try to evade a military conflict and stop provocations. This conclusion was also based on the economic interests of Russian business, which clearly did not want an open clash with the West.

However, the leadership of the Russian Federation chose a different scenario - the recognition of the LDNR and the conduct of a military operation to overthrow the pro-Western Kiev regime.

Armed actions, as we know, are the continuation of politics by violent means. They are just, that is, defensive, and unjust, that is, predatory. If Biden and Western propaganda are to be believed, then the military operation of the Russian Federation is aggression and attack. However, the facts say otherwise.

The purpose of the military operation of the Russian Federation is to overthrow the fascist regime in Ukraine, so the method of conducting military operations was chosen quite delicate, sharply different from the customs of warfare. Unlike the criminal placement of weapons in residential areas, preventing the evacuation from cities and the distribution of small arms to gangs by the Kiev authorities. The goal of Zelensky and the United States is to arrange a bloodbath for the sake of PR.

On the one hand, the policy of the Russian Federation in this case outwardly copies the imperialist aggression of the United States, when a large and strong country establishes a political regime that suits itself, on the other hand, Russia's position that the military operation is defensive in nature, and the Kyiv regime is reactionary and anti-people , is quite justified. The final conclusion about the nature of the military operation should be made based on its results, but at the moment, the denazification and demilitarization of Ukraine looks fair.

Moreover, if we proceed from the will of the Russian people, the people of Donbass and a significant part of the Ukrainian people, such a military operation is clearly eight years late!

Thus, Biden was right, but this rightness is akin to military cunning. He pushed Russia towards an armed solution to the problems created by the United States, counting on the strength of the "most powerful army in Europe", but he miscalculated in his assessments. It is a pity that the leadership of the Russian Federation has shown inconsistency in its position on the civil war in Ukraine and in its statements, since informationally Russia is presented as an aggressor.

The essence of Russia's military operation is that it crowns the end of the civil war in Ukraine. The terrible, reactionary, comical, absurdist period in the history of Ukraine under the rule of nationalists is coming to its logical conclusion. The United States establishes loyal regimes in countries bordering Russia with the sole purpose of starting wars. So it was with Georgia (2008), so it was with Armenia (2020), so it was with Ukraine.

Now the most important thing is that the punitive battalions be destroyed as decisively as possible, the Armed Forces of Ukraine defeated, and the leadership of Ukraine convicted of war crimes.

Russia's main danger does not come from a break with the West, as is often portrayed. The worst thing is that there are not only Ukrainian Nazis in the world, but also Polish ones who can try to seize Western Ukraine and the situation will quickly get out of control.

It should be noted that all military conflicts, civil wars and nationalist regimes in our region are a direct consequence of the self-destruction of the USSR. History takes cruel revenge on those who thoughtlessly broke and destroyed the social system that the Soviet people built with blood and sweat.
Ctrl Enter
Noticed oshЫbku Highlight text and press. Ctrl + Enter
Reporterin Yandex News
Reporterin Yandex Zen
12 comments
Information
Dear reader, to leave comments on the publication, you must sign in.