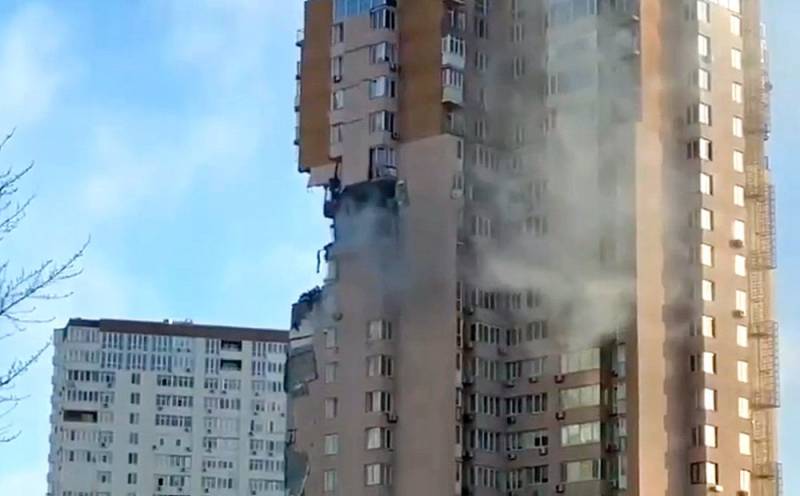 On the morning of February 26, a rocket hit a 22-storey residential building on Lobanovsky Avenue in Kyiv. As a result, apartments on several floors of the high-rise building were destroyed. The State Emergency Service of Ukraine reported that there were no victims or injured.


After the incident, the Ukrainian side began to spread on social networks information about the shelling by Russian troops. Allegedly, the Kalibr cruise missile landed in the mentioned house, absolutely not delving into technical question.

At the same time, from the videos below, it becomes clear that the house was not hit by a cruise missile. On the frames of the fast-flying ammunition, a torch from the operation of a jet rocket engine is clearly visible. However, such power units are not installed on cruise missiles. "Caliber" fly slower, and their explosion power is much greater. If ammunition of the Caliber family had flown into this house, the consequences would have been much worse, it’s not a fact that the high-rise building survived at all.


With a high degree of certainty, it can be assumed that an anti-aircraft guided missile (SAM) of the Ukrainian air defense system hit the house. Probably from the S-300 air defense system, since these complexes were recently seen there.

In turn, the Ministry of Defense of the Russian Federation is sure that we are talking about missiles from the Buk-M1 air defense system of the Ukrainian air defense system. During the flight, the guidance system failed at the old ammunition and it landed in a high-rise building. This is also evidenced by the characteristic damage to the building. In addition, the Russian military department categorically denies shelling residential areas of Kyiv with rockets.

Thus, the Ukrainian air defense once again distinguished itself by firing at a high-rise building in the capital. We remind you that in 2014, the Ukrainian Buk-M1 air defense missile system shot down an airliner with passengers in the sky over the Donbass, flying on the MH17 flight on the Amsterdam-Kuala Lumpur route. Before that, in 2001, Ukrainian air defense shot down a Tu-154M airliner of Siberia Airlines flying SBI1812 on the Tel Aviv-Novosibirsk route over the Black Sea during an exercise. All 78 people (66 passengers and 12 crew members) on board died.
Ctrl Enter
Noticed oshЫbku Highlight text and press. Ctrl + Enter
Reporterin Yandex News
Reporterin Yandex Zen
2 comments
Information
Dear reader, to leave comments on the publication, you must sign in.