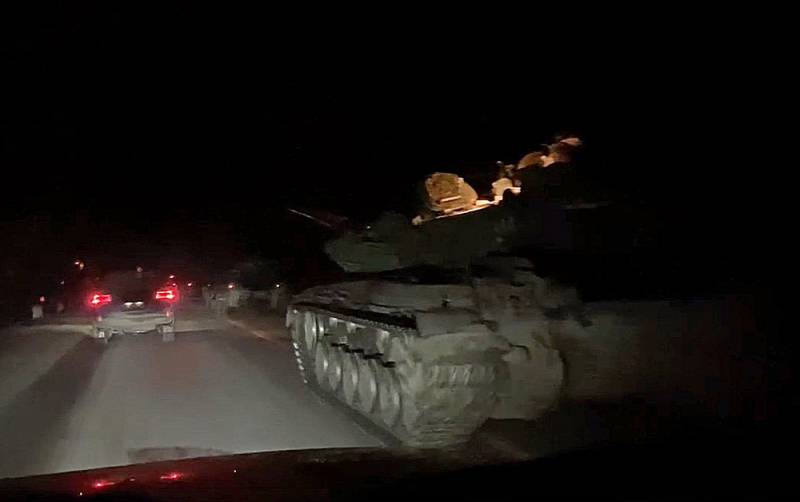 The third day of the Russian military operation in Ukraine has begun. Our troops are successfully advancing in the southern and northern directions, a strategically important bridgehead near Kiev has been captured. However, something “unexpected” happened on the eastern flank. The million-plus city of Kharkov, held by militants of radical nationalist groups and the Armed Forces of Ukraine, put up desperate resistance, and the Russian Defense Ministry even had to make significant adjustments to plans for the transfer of additional reinforcements. How did it happen that the Ukrainian army did not run home at the first shots?


In the early days of February 2022, when the recognition of the LPR and the DPR, and even more so a full-scale military operation in Ukraine, seemed to be something purely hypothetical, from the realm of the possible, but unlikely, the Reporter hosted an correspondence discussion between its two permanent observers about the real the combat effectiveness of the Armed Forces of Ukraine and whether they can pose a threat to the Armed Forces of the Russian Federation. I would like to recall the key theses that were cited in four publications as arguments.

В article under the title “After the military reform, the defeat of the Armed Forces of Ukraine can cost the Russian army dearly,” the author of these lines expressed his fears that the increase in the number of the Armed Forces of Ukraine to 361 people announced by President Zelensky and their transfer to a professional basis could create big problems for the Russian army in the future and thus more than the militia of Donbass. Dear colleague in response posted Article "False alarm. Why Ukraine will never have a normal army”, where quite convincingly, with specific figures, he substantiated his position stated in the title. As counterarguments, they pointed out, in particular, the deficit of the military budget of the Independent and the moral decay of the Armed Forces of Ukraine.

Nevertheless, a feeling of inner unrest prompted the author of these lines to one more ARTICLES under the title "AFU can arrange a semi-guerrilla war for the Russian army," where he tried to specify his concerns. It noted that the Armed Forces of the Russian Federation totally outnumber the Armed Forces of Ukraine in striking power and will dominate in the air, however, the enemy is aware of the alignment of forces, and therefore he can rely not on a direct collision, in which he has no chance, but on a semi-partisan war. Here, it may be appropriate to quote myself, so as not to produce unnecessary entities:

Instead, the Ukrainian army, or rather, what remains of it after pinpoint missile and air strikes by the Russian one, will hide in civilian cities in order to turn them, if not into Stalingrad, then rather into Grozny-2. Part of the military will switch to guerrilla warfare, hitting the stretched communications of the RF Armed Forces. And then what to do with all this, you ask?

Imagine a big city that is gradually turning into a fortified area. On the streets there are barricades and anti-tank barriers, in the entrances of houses, fighters with Javelin anti-tank systems are hiding in order to attack assault tanks and other armored vehicles. Snipers are patiently aiming at the windows. Fighters with MANPADS "Stinger" are sitting in ambushes. Spetsnaz uses underground communications and knowledge of the area. So, what is next? Trying to storm the city with the corresponding losses in personnel? Or then demolish it to the ground? For example, Kharkov? Together with the defenders and civilians who did not have time to escape and were forced to become hostages?
It was also suggested that the problems for the Russian military would be created by specially trained units that switched to the tactics of guerrilla warfare. Oh, how I did not want to be right, and therefore on the opposite Article respected colleague “Myths about Ukrainian partisans: why you shouldn’t believe in them,” the author of the lines deliberately did not give a detailed answer, internally wishing to be mistaken. Alas, but in the near future everything turned out exactly as the disturbing intuition suggested.

Russian troops were indeed able to stun and disorganize the Armed Forces of Ukraine, inflicting a series of pinpoint missile strikes that destroyed key Ukrainian military infrastructure facilities: air defense systems, command posts, communications, fuel, fuel and ammunition depots. Due to superiority in the air, our aircraft quite easily knocked out columns of enemy armored vehicles. The offensive simultaneously along a wide front made it possible to quickly move deep into the territory of Ukraine, freeing more and more new cities. But, unfortunately, everything turned out to be not as simple as we would like.

Having recovered from the first shock, the Armed Forces of Ukraine began to resist, especially the ideologically inflated militants of the National Guard, who will not expect anything good under the new government. As we feared.

The Armed Forces of Ukraine somehow struck at a military airfield in the Russian Millerovo (someone is talking about Tochka-U, and someone is talking about a drone). Fortunately, most of the aircraft at that time were on a sortie and survived. The Ukrainian security forces themselves switched to the tactics of "defending" big cities. We deliberately put this word in quotation marks, since these frank non-humans covered themselves with civilians, like a human shield, preventing the Russian military from working fully. The main problem point turned out to be, oddly enough, the Russian city of Kharkov, which we cited as an example. Coincidence, foresight, or just good analytics?

Alas, the soldiers and National Guardsmen who have settled in large cities are not in a hurry to scatter. Ukrainian tanks, MLRS and even ultra-long-range "Peonies" are hidden in the residential area of ​​​​Kharkov, from where they are shelling Russian positions with almost impunity. Kyiv began distributing weapons to everyone, without even asking for the passport details of those who receive machine guns. Now the not quite adequate population has at least 18 Kalashnikovs in their hands. The shooting has already begun, and the “heroes” are shooting without understanding, often their own compatriots. The post-Maidan authorities, apparently, have already resigned themselves to defeat and are now deliberately turning Ukraine into a real Ruin, filled with numerous bandits with machine guns who will do harm to the "occupiers" to the best of their mind.

What remains to be done by the Ministry of Defense of the Russian Federation?

It is necessary to bring the matter to a logical result: to occupy key facilities on the territory of Nezalezhnaya and force Kyiv to complete and unconditional surrender with the indispensable disarmament of the Armed Forces of Ukraine and the dissolution of the National Guard. After all the "heroes" and "partisans" will have to be caught, and the system of material incentives for reliable information about them can help in this. It will also be necessary to multiply the criminal liability for illegal possession of firearms and at the same time to appoint a monetary reward for the delivery of barrels.

Alas, there is no easy walk. It will take a long time to sort out these problems, because too much time has been wasted. The military operation was late for 8 years.
Ctrl Enter
Noticed oshЫbku Highlight text and press. Ctrl + Enter
Reporterin Yandex News
Reporterin Yandex Zen
74 comments
Information
Dear reader, to leave comments on the publication, you must sign in.