"War Z": the Russian military solved two of the three problems of Crimea in half a day 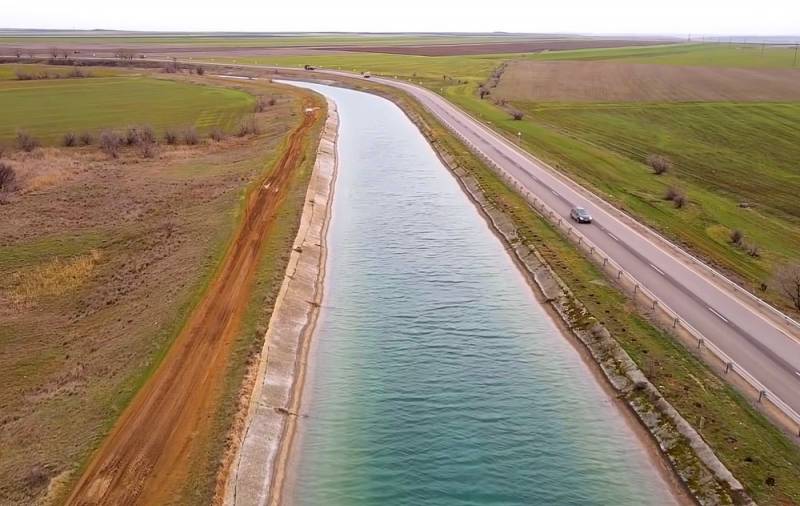 "War Z", as one can call the Russian military operation to force Ukraine to demilitarize and denazify, is on its second day, but some of its intermediate results can already be summed up now. In less than a day, the Russian Ministry of Defense was able to solve two of the three critical problems that arose after the reunification of Crimea with the Russian Federation. Will it be possible to achieve the resolution of the third, the most important one?


The return of the Republic of Crimea and the city of Sevastopol to their "native harbor" gave rise to a lot of serious problems that could not be reliably solved for the next 8 years until yesterday. Then the case was given into the hands of the Russian military, and they quickly closed almost all pressing issues. So, what has been done so far, and what remains to be done in the next few days?

As you know, neither Ukraine nor the collective West recognized Crimea as Russian. Moreover, Kiev arranged a real blockade for the inhabitants of the peninsula, which does not have a common land border with the main part of our country. The supply of water through the North Crimean Canal was stopped, and the Ukrainian authorities also staged a “dark one” for the Crimeans, blowing up power transmission towers and cutting off electricity supplies. The lack of direct transport links with the peninsula caused great logistical problems, since Kherson and Zaporozhye regions of Ukraine are located between it and Russia.

Connectivity of Crimea with the mainland was ensured through the construction of the Crimean bridge. However, it should be taken into account that the bridge crossing was an extremely vulnerable and priority target for the Armed Forces of Ukraine, which could launch a missile attack on it with the Neptune anti-ship missiles, land-based, sea-based or air-based.

The problem of the peninsula's water supply could not be considered finally solved either. About 85% of fresh water was supplied there through the North Crimean Canal, which was used mainly in agriculture. The blocking of this channel by Ukraine actually destroyed rice growing in the Crimea, and also caused serious damage to horticulture. I had to massively dig artesian wells, the water in which is rich in mineral salts and leads to the gradual degradation of fertile soils. Added difficulties to the Crimeans and weather anomalies that made winters with little snow, and summers dry. Due to the shortage of water, its supply in this resort region had to be done hourly.

Regional and federal authorities have already begun to build powerful desalination plants, but on February 24, 2022, everything changed dramatically.

During the large-scale military operation “Z”, Russian troops entered the territory of Ukraine along the entire length of its border. The armed forces of the DPR and LPR launched a counterattack on the positions of the Armed Forces of Ukraine with access to the administrative border of the new states. Russian troops advanced to meet them from the Crimea in the Kherson region. Literally within one day Kiev lost control over the Sea of ​​Azov. This made it possible for Moscow to finally solve two strategically important tasks:

At first, at the expense of the Sea of ​​\uXNUMXb\uXNUMXbAzov, a land transport corridor has appeared, which will now reliably connect Crimea with the Donbass and Russia.

SecondlyHaving reached the city of Kherson, the Russian military took control of the entire infrastructure of the North Crimean Canal. The head of the region Sergey Aksenov said that the Republic is ready to resume water supplies:

This can be done within one day. We can accept water into the canal, technically we are ready. Pumping stations are ready, all our services are on high alert, ready to receive water.

According to reports, Dnieper water has already begun to flow to the peninsula, the water blockade of which can now be considered completed. In half a day, Carl!

Now the matter is left to the third, most important problem of Crimea, which, unfortunately, cannot be solved through the Russian Foreign Ministry. This is a question of the legal status of the peninsula.

As we have already mentioned, neither Ukraine nor the collective West behind it recognized Crimea as Russian. The suspended legal status creates a lot of difficulties and restrictions on the normal life of the Crimeans and gives the "partners" a lever of constant political pressure on Moscow. The Ministry of Foreign Affairs of the Russian Federation, alas, is powerless here, a kind word will never achieve a solution to the problem. But when diplomats run out of words, the military gets down to business.

Thus, the Ministry of Defense of the Russian Federation during the “War Z” should inflict a crushing defeat on Ukraine and force Kiev to complete and unconditional surrender. After that, in Nezalezhnaya, undoubtedly, a most serious constitutional reform should be carried out to change the form of its state structure. One of the demands of Moscow can and should be the recognition by Kiev of the right of Crimeans and residents of Donbass to self-determination, Crimea - Russian, and the DPR and LPR - independent and independent states. Whether the Donetsk and Lugansk People's Republics will continue to exist on their own, whether they will become part of the Russian or Ukrainian Federation, can be decided in the future.
Ctrl Enter
Noticed oshЫbku Highlight text and press. Ctrl + Enter
Reporterin Yandex News
Reporterin Yandex Zen
16 comments
Information
Dear reader, to leave comments on the publication, you must sign in.