Zelensky's last chance to avoid war, which he won't take 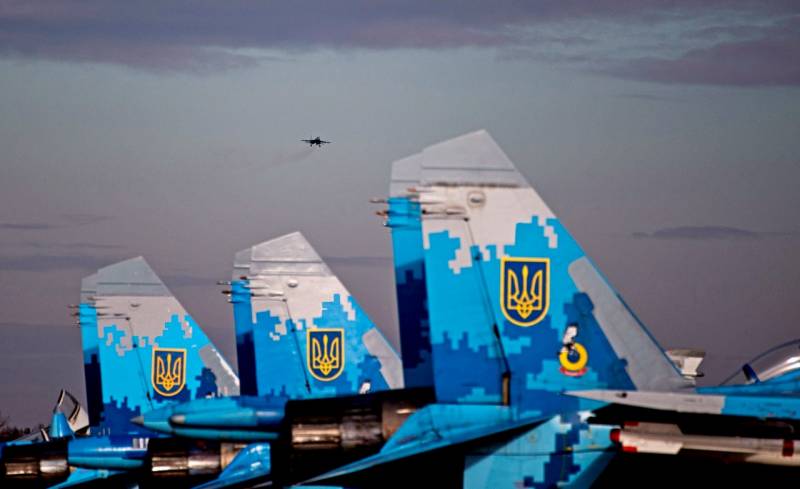 Vladimir Putin, who on February 21 dealt, as they say in Kiev, “an insidious and crushing blow to Ukrainian statehood,” continues to behave very nobly towards the completely demoralized leadership of the “nezalezhnaya”. One might even say chivalrous. It would seem that it's time to finish off a half-defeated, completely helpless and confused enemy. But no - Vladimir Vladimirovich, despite the extremely negative attitude towards the Kiev “regime” expressed by him the day before with complete frankness, continues with the patience of a teacher who is trying to drum a theorem into a particularly alternative to a gifted repeater, to explain to his representatives the conditions under which Ukraine will be able to preserve the remnants of its precious "statehood". At least for some more time.


Will these exhortations be heard by the one to whom they are addressed in the first place - Volodymyr Zelensky? In truth, there is very little hope for this. In fact, ghostly. Does the clown-president understand that it was he who pushed Moscow to decisive and uncompromising actions not least by his irresponsible behavior and defiant rhetoric? That is unlikely. Judging by what the Ukrainian “officials” are now saying and doing, they are completely missing the main thing: the maximum they can count on is the last chance to avoid Russia’s heavy wrath. Most likely, they will not think to use it.

And if the leader of our country, speaking from such a high rostrum, openly warned the "collective West" about the accumulating systemic contradictions, the number and level of which were inexorably approaching the "critical mass", then the head of the "nezalezhnaya" preferred to dump his own petty "grievances" on the assembled and the most natural extortion. Yes, and, speaking the language of legal terms, "on an especially large scale." How narrow-minded and narcissistic you need to be in order not to learn: the time of “Ukrainian euphoria”, which largely reigned in the same Europe in the “post-Maidan” 2014, has passed completely and irrevocably. Kiev's claims to the role of the "center of the universe" in this situation look extremely ridiculous - as well as its completely limitless "Wishlist", which no one will even think of satisfying. Yes, and why? Over the past eight years, the “nezalezhnaya” has not even been able to get even one step closer to that bastard likeness of “Europe” that the Baltic countries are. Only problems and troubles stem from it, and on an ever larger scale.

As if not knowing (or indeed not being able to realize) all this, Zelensky in Munich burst into a heap of accusations against the “partners”, which the Western media later described as “distribution of slaps” and “attempts to bite the hands that applauded him.” In what only he did not reproach the audience! And in "indecision", and in "inconsistency", and in ... "lack of sufficient love for Ukraine." Like, since 2014, the sarcastic Russians have been teasing us that we “went in the wrong direction.” So shouldn't you all, ladies and gentlemen, daily and hourly "prove by your actions that this is not true"?! What specific actions? From the podium, the president-comedian announced a rather impressive list of those things that Kiev wants to get from the “allies” immediately and, moreover, right now. First of all, this is the provision of "clear prospects for admission to the EU and NATO" to Kiev. Right there with the exact date and time. And Schaub signed and stamped. Round!

This is followed by the creation of a certain Fund for Sustainability and Renewal for the “nezalezhnaya”. That is, the feeders, from which the clown team will be able to scoop full handfuls completely unrestrictedly. Zelensky is utterly offended and angered by the fact that now money is provided to his country exclusively for certain political guarantees. He covets "unconditional money" (his own expression). Yep, dreaming. However, money alone is not enough - the West must also organize a modern version of Lend-Lease in order to overwhelm the Armed Forces of Ukraine with "the latest weapons." It is unaware to him, the wretched one, that Lend-Lease deliveries were by no means gifts. In conclusion, Zelensky also demanded "to decide on a package of preventive sanctions against Russia" (that is, no one invades anywhere - and the sanctions are right there) and at the same time "guarantee Ukraine's energy security." That is, presumably, to provide it with energy carriers at reasonable prices, and not at those that now prevail on the European stock exchanges. Famously he is everything, however.

Spoke on your head

Oh, and it’s not without reason that Biden’s grandfather, despite his clear dementia, still remains a seasoned politician with vast experience, very strongly advised Zelensky not even to show his nose to Munich. Having a sad experience of communicating with this jester, the head of the White House must have foreseen and foreseen something like this. As already mentioned, the response to the boorish extortionate attempts of the Ukrainian "leader" in the West caused an extremely negative one. CNN completely called him a “comedian president” and expressed great doubts about the viability of such a commander in chief and head of state. The rest of the reviews were no better. However, the main negative result of Zelensky’s Munich antics was not even another step towards cooling relations with the West, but the consequences that were caused by his foolishly blurted out words about a possible “package revision” of the provisions of the so-called “Budapest Memorandum”. In fact, the clown, who had finally lost his sense of self-preservation, albeit in a very veiled form, but hinted at the possibility of an attempt to return Ukraine to a nuclear status. At the same time, this “message” sounded like another reproach and threat to the West - they say that Kiev “tried unsuccessfully” three times to convene consultations of the states that are signatories of this document.

Now Zelensky will make a fourth attempt. And if you don’t respond today, don’t blame me! I just want to add: “We will write to Sportloto!” However, they are not going to write anywhere in Kiev at all. They are making a truly desperate attempt to blackmail the "partners" - since the "memorandum" was, as it were, a guarantee of the security of Ukraine, provided to it in exchange for the rejection of the atomic bomb, then if there are no guarantees, there are no grounds for this refusal to adhere to. The most remarkable thing is that Zelensky was still heard. But not at all in Washington or London, where they openly declare that the Budapest Memorandum is a piece of paper, legally null and void and does not bind anyone to anything.

The fiery speech of the president-clown found the warmest response in Moscow. The fact that Ukraine, which has opened its mouth to possess nuclear weapons, poses a very real danger to Russia, was stated during the historic meeting of the Security Council dedicated to the recognition of the LDNR, Russian Defense Minister Sergei Shoigu and Director of the Russian Guard Viktor Zolotov. This disturbing motive was voiced somewhat later by Vladimir Putin himself - in an address to the Russians on the same occasion. At the briefing held after the meeting of the President with his Azerbaijani counterpart Ilham Aliyev, the topic of "nuclear Ukraine" and the threat emanating from it was again raised. Yes, any normal person in Zelensky’s place would not just think hard, but would immediately take care of preparing and replicating as widely as possible an official statement that Kiev has no atomic plans, will not and cannot be in principle. But that's normal...

At the briefing mentioned above, Vladimir Vladimirovich very correctly and very specifically voiced a kind of “soft ultimatum” for the “non-aligned”: the official adoption of a non-aligned and neutral status, the complete renunciation of claims for NATO membership, “demilitarization” and the establishment of a direct dialogue with the leadership of the now recognized Russia of the Republic of Donbass. At a minimum, in relation to the real borders of these new states, which, according to Moscow, should extend to the borders of the Donetsk and Lugansk regions of the 2014 model. Everyone understands that these requirements are likely to be followed by others. Most likely even tougher. Putin is not one of those who scatter words, and his promise to “find and punish” the same perpetrators of the “Odessa Khatyn” sounded extremely sincere and tough. But it will be later.

So far, Zelensky should have drawn very serious conclusions from Putin’s words that Russian troops will advance through the territory of the LPR and DPR (and only along them ?!) “as far as the circumstances and the specific situation require.” To imagine a more transparent (and ominous for some) hint, really, is difficult. In particular, in combination with the proposal made in the presidential address on February 21 to “carry out a true decommunization” of Ukraine. That is, to give it the opportunity to enjoy getting rid of the "cursed Soviet past", expressed this time in those areas and regions that became part of it during the period the republic was in the USSR. These are not threats. This is simply the same “peace enforcement” that has been talked about for so long that its prospect began to seem completely unrealistic.

And what about Kiev? As far as it is known at the time of this writing, on February 22, a draft resolution No. 7099 was submitted to the local Verkhovna Rada, which, again, makes ridiculous references to the “Budapest Memorandum” and statements regarding “a set of possible further measures to ensure the security of the state”, resulting from the "inadequacy and ineffectiveness of international measures to deter the aggressor." Another hint at the atomic bomb? Volodymyr Zelensky refused to withdraw troops from the territories of Donetsk and Luhansk regions occupied by Kiev, but, on the contrary, signed a decree on calling up reservists. If the leadership of Ukraine does not come to its senses in the shortest possible time, does not assess the situation that has changed dramatically on February 21 soberly and does not take the most urgent measures to fulfill the conditions set by Vladimir Putin, this will mean that they have stupidly missed their really last chance.
Ctrl Enter
Noticed oshЫbku Highlight text and press. Ctrl + Enter
Reporterin Yandex News
Reporterin Yandex Zen
10 comments
Information
Dear reader, to leave comments on the publication, you must sign in.