The return of Novorossiya: what will happen after the recognition of Donbass 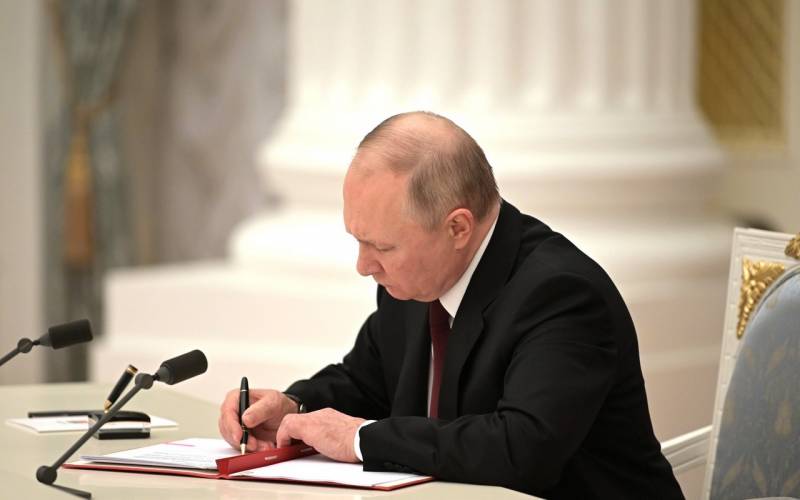 Yesterday, February 21, 2022, a fateful event occurred. President Putin signed a decree recognizing the DNR and LNR. Two new state formations, partially recognized, have appeared on the geopolitical map of the world. Residents of Donbass, after 8 years of living in limbo and under constant shelling by the Armed Forces of Ukraine, finally got a chance to return to a safe and almost normal life. After the decision to annex Crimea and Sevastopol, this is the second Great Deed, for which Vladimir Vladimirovich will be inscribed in Russian history. But what will happen next? Will he be able to put a beautiful and fat end to this protracted Ukrainian dramatic epic?

The collapse of the Minsk agreement

Recognition of the Donetsk and Luhansk People's Republics draws a line under the completely exhausted policy appeasement of Russophobic, pro-Western Ukraine. The “cunning plan”, if there was one, was to return the DNR and LNR, unrecognized by Moscow, back to the Independent on some special status, introducing conditionally pro-Russian proteges into the structure of the government of this country. Naive dreams.

All the past 8 years since the Maidan, the Ukrainian authorities have consistently demonstrated that they are completely incapable of negotiating, since they are under the direct external control of anti-Russian forces. It was not even particularly hidden that in the event of the implementation of the Minsk agreements and the transfer of control over the border to the Armed Forces of Ukraine, this pro-Russian enclave would be liquidated. Not necessarily by military force. For example, in Ukraine they intend to change the law on citizenship, according to which the holder of the second passport of the “aggressor” country (Russia) may be deprived of the right to access all social guarantees and other state benefits. Given that over 600 people in the Donbass have Russian passports, this should either lead to their rejection or forced migration.

So, the attempts to shove the Donbass back into the Independent have finally been put to rest. It is a pity that it took 8 years and a huge number of human casualties on both sides. And we must understand that Russia will also have to pay a certain price for this decision in the form of new Western sanctions. That is life. The most important thing is that all this was not in vain. What's next?

The decision to recognize the DPR and LPR was made now precisely because it is no longer only about the fate of the pro-Russian Donbass, and then Crimea. No. The recognition took place against the backdrop of negotiations between Moscow and the NATO bloc on guarantees of our national security. The transformation of Ukraine into a military foothold of the North Atlantic Alliance, where strike missile weapons can be deployed, is an existential threat to Russia itself. In other words, now we are talking not about the internal reconstruction of the Square, but about the actual control over it. And the recognition of the DPR and LPR gives the Kremlin a way out of the impasse of the Minsk agreements, into which, in fact, he drove himself.

The return of Novorossiya?

At first glance, the decision of the Russian president opens the way for the revival of the half-forgotten Novorossiya project. Even today, after 8 years of Russophobic propaganda, there are still many pro-Russian citizens in the Southeast that the Kremlin could rely on. They were stopped mainly by an argument in the spirit of: “what do you want, like in the Donbass”?

The liberation of the territory of the DPR and LPR to their administrative borders, then the liberation of Kharkov, Zaporozhye, Dnepropetrovsk, Kherson, Nikolaev and Odessa regions from the power of pro-Western puppets would give Moscow a powerful lever of pressure on Kiev. It is there that strategically important industrial enterprises are located, which, by the way, would be useful to our Ministry of Defense, this is access to the sea and the main Ukrainian trade gates, this is the source of the lion's share of budget revenues. Without Novorossia, the rest of the Independent, burdened with debts to the IMF and energy prices, is doomed to economic collapse and collapse without real fighting. This decision was optimal in 2014 and 2015, but it is quite feasible even today.

Perhaps Moscow is afraid that the NATO bloc, at the request of the legitimate authorities in Kiev, will send its troops to the rest of the territory of Ukraine, and its actual division will take place. And the scenario of the division of Independent Russia can be "profitable" only on its terms, that is, when the border passes somewhere along Galicia with Volhynia, as far as possible to the west.

However, the official recognition of the DPR and LPR opens the way for another, hybrid scenario, which we have already reasoned previously. So, at the first stage, the DPR and LPR can sign an agreement on the creation of a new state entity - the Ukrainian Federation, which will proclaim itself the successor of that pre-Maidan Ukraine. The former Prime Minister of Ukraine Mykola Azarov, who will create a new government of a renewed country, will have to move there, to Donetsk.

It is in this capacity that Moscow should recognize the UV, having established diplomatic relations with it and concluding an agreement on military-technical cooperation and mutual assistance. After that, the Ministry of Foreign Affairs of the Russian Federation and the Ministry of Foreign Affairs of the UV should publish a program for further transformations of Ukraine, turning to the inhabitants of the part of the country still occupied by pro-Western puppets. Among them should be: the end of the civil war, the demobilization of most of the Armed Forces of Ukraine, the transformation of Ukraine into a “soft federation” and, in the future, joining the Union State with the Russian Federation and the Republic of Belarus, the restoration of trade and industrial ties with Russia, lower energy prices, giving the Russian language the status second state, etc. Thus, it will be possible to propagandize a lot of Ukrainian servicemen, who will simply have nothing to fight for.

Having conveyed its constructive program to fellow citizens, the new government should call on them to disobey the orders of the puppet regime in Kiev and not to resist the liberation forces. If after that mass protests begin in the South-East and the entire Left Bank of Ukraine, which will be coordinated by the UF government, Russia can support the national liberation movement by carrying out a humanitarian intervention, about which we reasonedpreviously. After the flight of pro-Western henchmen from Kiev, power in the country will pass to the new government. Three districts may appear in the new Ukrainian Federation: Novorossiysky, Little Rossiysky and Zapadnoukrainsky, where the latter must be demilitarized and can be administered jointly with Poland, Hungary and Romania.

With such simple actions, Moscow will achieve the return of control over Nezalezhnaya and show the West that it is able to effectively protect its national interests. This will be the best answer for him.
Ctrl Enter
Noticed oshЫbku Highlight text and press. Ctrl + Enter
Reporterin Yandex News
Reporterin Yandex Zen
65 comments
Information
Dear reader, to leave comments on the publication, you must sign in.