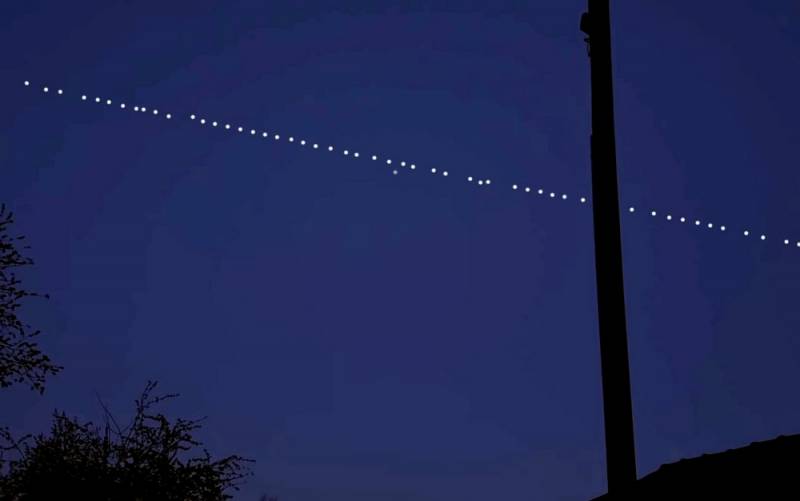 In the first half of February 2022, it became known about the major failure of the ambitious project of the famous billionaire Elon Musk. His space company SpaceX was unable to launch 40 Starlink satellites into orbit. If something like this happened in our country, then the head of the Roscosmos state corporation would have faced “wide public censure”, but the American businessman, in general, was treated with sympathy: they say, an intelligent person, does a good job, but everyone has failures, he’s not mistaken only the one who does nothing. But is Mr. Musk doing such a good job? Perhaps, finally, it is worth looking up?


A press release from SpaceX regarding the incident reads as follows:

According to a preliminary analysis, increased low-altitude drag prevented them from exiting safe mode and beginning orbit-raising maneuvers, and up to 40 satellites will re-enter or have already re-entered the Earth's atmosphere.
The spacecraft were launched into low Earth orbit, but due to an unexpected geomagnetic storm, the atmosphere heated up, which led to an increase in its density. The satellites had to be put into a safe mode, from which most could not get out. SpaceX acknowledged their loss. Should I sympathize with Elon Musk, who wants to provide the whole world with reliable satellite Internet?

According to the plans of the American corporation, over 12 Starlink satellites should be launched into low Earth orbit. To date, there are already about 2 thousand of them. In the distant future, the total number of satellites should be increased to 30. It is believed that Elon Musk will be able to provide reliable broadband Internet access even to the most inaccessible places on Earth. A person does a good deed.

The reverse side of Starlink

Space has always been at the forefront of the Cold War and the arms race. Unfortunately, the "peaceful" Starlink is no exception to this rule.

The mysterious American agency DARPA (one of the scientific divisions of the Pentagon) launched the Blackjack program, which aims to use vehicles in low Earth orbit (LEO) to create a new generation of satellite networks. Alas and ah, but Elon Musk's "purely civilian" project is technically integrated into this program. Here is how the well-known specialized publication Popular Mechanics comments on this:

The sheer number of satellites ensures fast data transmission through the nearest satellite, and if one satellite fails, others can fill the gap.
The ultimate goal of the Pentagon is to create a global network where all satellites from different constellations will be linked. This opens up a lot of additional opportunities for the US military.

At first, all these tens of thousands of spacecraft will be used to continuously monitor the situation around the Earth and track Russian and Chinese intercontinental ballistic missiles, long-range aircraft, surface ships and submarines. In fact, Starlink and other Western orbital constellations will turn into the space echelon of the Missile Attack Warning System (SPRN). In addition, "peaceful" satellites in the future will be able to be used by the military to provide target designation data to missile strikes.

Secondly, such a powerful orbital constellation creates the prerequisites for a real technological breakthrough in the United States. Thus, already now the amount of information received from existing satellites has become so great that the Pentagon cannot process all of it promptly. Also quite limited are the possibilities for transmitting received data from orbit to ground centers. Further it will only get worse.

The National Geospatial-Intelligence Agency (NGA) came to the logical conclusion that the problem of automatic analytics every second can be solved only through the introduction of artificial intelligence (AI). It was also decided to entrust him with the analysis and processing of data in the near future. All Western satellites, including Starlink, will be connected to a single network that communicates with each other via optical communications. This will increase the overall efficiency, when the AI ​​can only transmit to the ground the data that is really needed. Also, delegating the management of the global satellite system to artificial intelligence will allow it to distribute power even if part of the spacecraft is destroyed, that is, the American early warning system will turn into a fault-tolerant one.

It is precisely these processes that are taking place right now in the sky above our heads. Maybe it's time to look up?
Ctrl Enter
Noticed oshЫbku Highlight text and press. Ctrl + Enter
Reporterin Yandex News
Reporterin Yandex Zen
13 comments
Information
Dear reader, to leave comments on the publication, you must sign in.