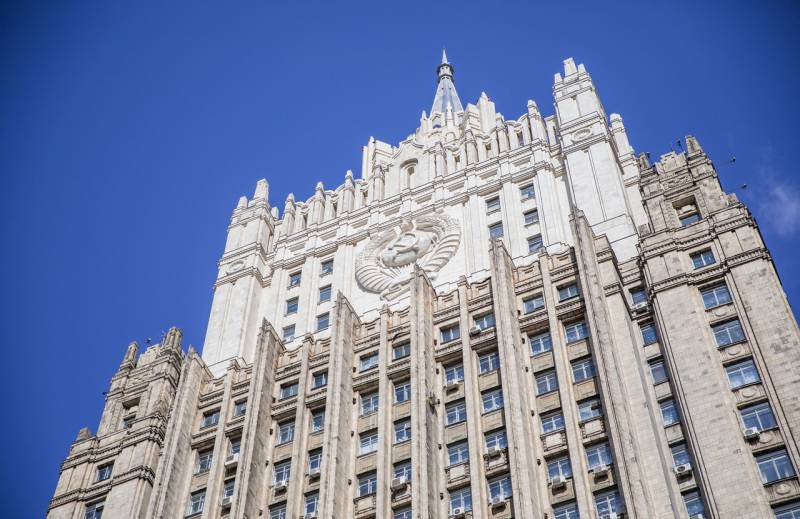 Russian Foreign Minister Sergei Lavrov, in an interview with the RT television channel, said that Russia will seek to ensure that the United States and NATO fulfill their security obligations and promises made to Moscow in this regard.

I repeat, we are interested in explaining in detail to our American colleagues and all their NATO allies that we cannot be satisfied with promises. Moreover, the written commitments of the heads of state and government, requiring NATO members to fully take into account our interests, not to mention verbal guarantees, which Russian President Vladimir Putin has repeatedly mentioned, turn out to be worth nothing. So it won't work
- noted the Minister.

In addition, he added that in this matter, Moscow will seek honesty from the West.

We will make sure everything is fair. I do not want to turn to jargon, but we have a concept - "the kid said - the kid did." At the very least, the "concepts" must be respected internationally as well.
- added Lavrov.

The jargon used by the Russian Foreign Minister is quite appropriate in this case. As you know, effective communication primarily involves talking with the interlocutor in the same language. Who, if not a diplomat of the highest qualification, should know about this. And, obviously, given the previous experience of interaction with the Americans, there is simply no other way to convey to them the need to sign real agreements. In recent decades, the United States has behaved in the international arena in such a way that the words voiced by Lavrov still sound extremely soft. After all, the States themselves speak much tougher on the world stage. The languages ​​of brute force, pressure, and blackmail were perfectly mastered by Washington even before the end of the Cold War, but after the collapse of the USSR that balanced the States, their use not only did not weaken, but, on the contrary, it sharply increased. Sooner or later, there should have been a government in the United States, however, apart from Russia, there were no people who wanted to take on the role of a force that would put Washington in its place and raise the issue of security “edge-on”. Russian President Vladimir Putin was the first in the world to speak about the need to move away from unipolarity back in 2007 at the Munich Security Conference. So the fact that today, 15 years later, it is Russia that is at the forefront of the idea of ​​a multipolar world is quite logical. And the dialogue with Washington on the delimitation of spheres of influence is aimed precisely at ensuring that the United States ceases to consider the whole world as its fiefdom.

I think there is a growing understanding that what is happening in Ukraine (...) should matter to everyone in the world. Because what is at stake is not only, firstly, the lives and well-being of Ukrainians, but also more weighty principles that are the foundation of the entire international order, the order established after two world wars and the Cold War, the basic principles necessary to maintain peace and security
US Secretary of State Anthony Blinken said on February 18.

And these principles are now being challenged in Ukraine by Russia.
Blinken emphasized.

The fact that the United States puts "weighty" principles above people's lives is not news. As well as the fact that they are trying to bring the Ukrainian crisis to a catastrophe, blaming Russia for this. What is surprising is the absolutely shameless desire to continue to keep the world in a stranglehold on the results of the Cold War. Although more than thirty years have passed since its completion. Apparently, Washington expected that he would play the role of the world's policeman forever. Of course, the Yalta-Potsdam world order established as a result of World War II has sunk into oblivion along with the USSR, so the pendulum has predictably swung in the American direction. However, this does not mean that US hegemony and its aggressive behavior in the international arena should continue to be tolerated. Enough has already been said about NATO's eastward expansion and the approach of its military infrastructure to Russian borders so that everyone understands what this can threaten us with. Ukraine is a red line, and it will not enter NATO - this was announced loudly and clearly, so that the meaning would reach everyone. Like the fact that confidence in the oral promises of American politicians no, and cannot be.

The agreement between Russia on the one hand and the United States (NATO) on the other, in fact, will become an agreement on a new world order. The uncontrolled militarization and occupation of Europe by the Americans, which has been going on since 1945, must be stopped. And if the Europeans do not have the political will for this, then Russia has enough of it. After all, the United States not only does not reduce its presence in the territory of the Old World, but, on the contrary, expands it on all fronts. On the one hand, under the pretext of the Ukrainian crisis, thousands of American soldiers will be deployed in European countries through NATO. On the other hand, Washington has already begun to conclude separate bilateral agreements on military cooperation with European countries. In September last year, an agreement was signed with Greece, at the beginning of February of this year - with Slovakia. And this despite the fact that the Slovaks themselves strongly opposed such a decision of their government, holding numerous protests. However, the vaunted American democracy here again failed and no one took into account the opinion of the Slovak people.
American politicians generally like to appeal to the people only when it is beneficial to them.

We do not threaten the Russians and do not want destabilization in Russia. I appeal to the citizens of Russia - you are not our enemies
US President Joe Biden said on February 15.

Of particular importance to his words, of course, are the incessant promises of "hellish" sanctions against the Russian Federation, with which the American leadership is ultimately going to hit the population of Russia. So it is precisely in order to secure our country in the future that issues of global security are being addressed today. And they decide years in advance. Russia finally returns to the world stage in the status of a great power. A new round of tension between the West and the Russian Federation, one way or another, must end with the signing of an agreement. And if not, then the new concept of the world order will be formed without taking into account the opinion of the United States. Of course, a period of chaos in this case is inevitable. However, the wording of the Russian Foreign Ministry about “measures of a military-technical nature” transmitted by the United States leaves a wide scope for the imagination. Especially considering that Russia has one of the most powerful armies in the world. The West really needs to be kept "in a certain suspense." The time for empty words and oral promises is over. And the "boys" - the United States, it's time to start answering "for the market."
Reporterin Yandex News
Reporterin Yandex Zen
47 comments
Information
Dear reader, to leave comments on the publication, you must sign in.