Americans go to the Arctic not for the Northern Sea Route 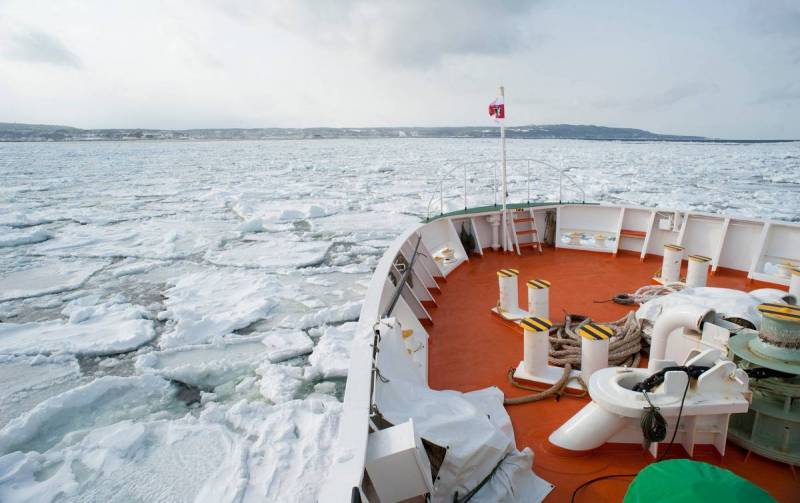 Recent years have been marked by Washington's heightened interest in the northern polar region. The US and its allies are creating special forces capable of operating in the Arctic. In response, Russia is strengthening the Northern Fleet, which received the status of a military district, and the possibility of forming some kind of special Arctic flotilla is being discussed. What have we really not shared with the "hegemon" in this cold deserted land?

It is believed that practical Americans became interested in the prospects that the Northern Sea Route opens up for international trade. Thanks to global warming, the polar ice caps are melting noticeably and faster. If you look at the map, it turns out that the NSR is the shortest waterway "from the Varangians to the Chinese." In theory, the reduction of the transport shoulder should make it more attractive for maritime commercial transport. Plus, there is no risk of a “thrombus” formation, as was the case recently on the Suez Canal. It would seem, take it and take it.

First of all, the navigation of the Northern Sea Route directly depends on the seasonal factor. To lead a caravan of ships with a guarantee, you need a heavy-duty nuclear-powered super-icebreaker of the “Leader” type. This project is being worked out in our country, but so far it is not “in the hardware” yet, and it is worth counting only the money that you have in your pocket.

Second. Wiring with the help of such special vessels costs a lot of money. So far, only Russia has a monopoly on this service, but other countries, led by the United States, are trying to challenge it. Interestingly, even far from Arctic China is building its own icebreakers. You can reduce the cost of wiring if you assemble a large caravan of ships.

Third. Like many things in our country, departmental games have a negative impact on the final result. Initially, the Ministry of Transport was solely responsible for the Northern Sea Route. However, in 2018, the state corporation Rosatom was made the infrastructure operator instead of a state institution. The ministry did not agree with this, and apparatus intrigues began, as a result of which the Ministry of Transport reserved the right to issue permits for the passage of ships along the NSR, and the corporation received the right to develop transport infrastructure. According to a recent statement by the head of Rosatom, Likhachev, due to inconsistency between the two departments, at the end of 2021, more than two dozen ships got stuck in the ice.

Let's face it, foreign customers will definitely not have confidence in such an "operator". It is much easier to send cargo along the long-trodden path of the Suez Canal. Plus, it is not entirely clear what kind of cargo to carry through the polar territories. You can't bring laptops and other electronics. It is risky to carry goods that require urgent delivery: you never know, you will get stuck among the ice, and then respond with penalties. The Arctic is what it is.

Does this mean that the Northern Sea Route has no special prospects?

Of course not. Rather, there is. It's just that in the foreseeable future the NSR should be perceived not as an international transit corridor, but as a sea gate for Russia to export natural resources from the Arctic region. It is enough to look at what companies and what is really being transported along the Northern Sea Route. These are oil, LNG, in the future - coal and other resources that will go through the port of Indiga planned for construction.

Then a natural question arises, what did the Americans forget then? As a transit route for the NSR, they have no need, since the United States simultaneously accesses both the Pacific and Atlantic oceans. Building expensive icebreakers to earn extra money as pilots on wiring? Yes, it will not work, since part of the Northern Sea Route passes through Russian territorial waters, and competitors will hardly be welcome there. It's clearly something else.

If you look not at a map, but at a globe, it turns out that it is through the Far North that the shortest distance for the flight of intercontinental ballistic missiles passes. And it is precisely under the ice of the Northern Ocean that the combat patrol areas of Russian strategic submarines are located. And it is there, in the Arctic, that American submarines hunt for our submarines constantly roam. And now the United States wants to qualitatively increase its military presence in this region.

In 2019, the then head of the Pentagon, Spencer, stated the following verbatim:

The current mission of the US Navy is to increase its power in the Arctic by creating new strategic naval bases in the Bering Sea region and expanding its military presence in Alaska.
And they are already doing it. The United States has launched a program to build a series of modern icebreakers. By 2027 there should already be 3 of them. American destroyers equipped with guided missile weapons (URO) have become frequent and uninvited guests in the Barents Sea. The US Navy is considering opening a permanent naval base in the Arctic. Warm hangars for F-35 fighters are being built in Alaska, and the number of these fifth-generation fighters is increasing.

The NATO allies are not far behind. This spring, the North Atlantic Alliance will hold a large-scale Cold Response military exercise in Norway, which will involve 35 troops. The British are especially trying, who are preparing their marines "to be ready to fight in the Arctic at any time, if necessary." I wonder who?

Not surprisingly, the Northern Fleet received the status of a separate military district. On the Russian side, a network of military airfields and air defense bases is being built in the Arctic. The ground forces received special "northern" anti-aircraft systems "Pantsir-SA" and "arctic" tanks T-80BVM. Patrol combat icebreakers are being built.