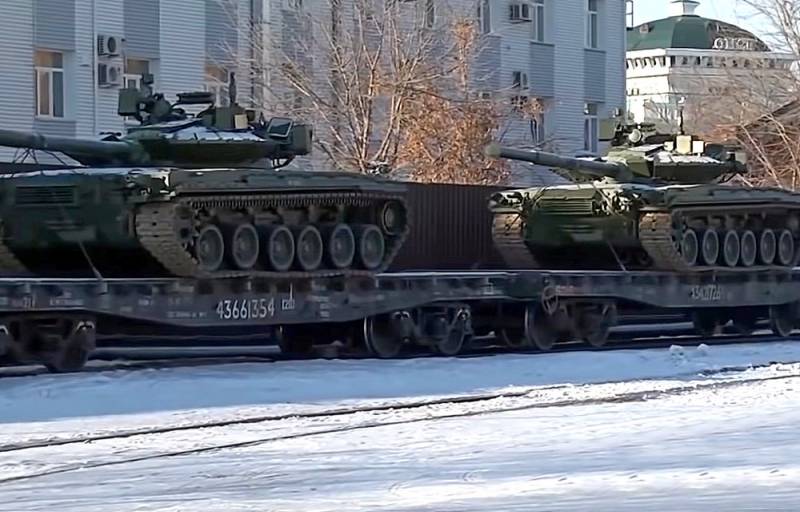 A video from eyewitnesses has appeared on the Web, as one of the most modern tanks in the Russian army, the T-90, is heading towards the Ukrainian border. The footage was filmed in the Kursk region.


Users of social networks were able to determine that this was the echelon of the 27th separate guards motorized rifle Sevastopol Red Banner Brigade named after the 60th anniversary of the formation of the USSR (military unit 61899), which advanced from Moscow to the Belgorod region.


This brigade is part of the 1st Guards Tank Red Banner Army (military unit 73621) of the Ground Forces (Western Military District) - the only tank army in the RF Armed Forces. About 20 T-90 units, one BREM, 4 units of 152-mm 2S3 Akatsiya self-propelled howitzers and trucks were found on the railway platforms. The structure also includes covered freight and passenger cars.

It should be noted that on February 16, the White House announced that the Kremlin was “secretly mobilizing for war” and deployed an additional 7 of its military personnel to Ukrainian borders. The public was informed about this by the American media, which specified that they attended a "closed briefing" at which officials did not provide any evidence of their words.
Ctrl Enter
Noticed oshЫbku Highlight text and press. Ctrl + Enter
Reporterin Yandex News
Reporterin Yandex Zen
3 comments
Information
Dear reader, to leave comments on the publication, you must sign in.