Prerequisites for Poland's military intervention in the Ukrainian conflict 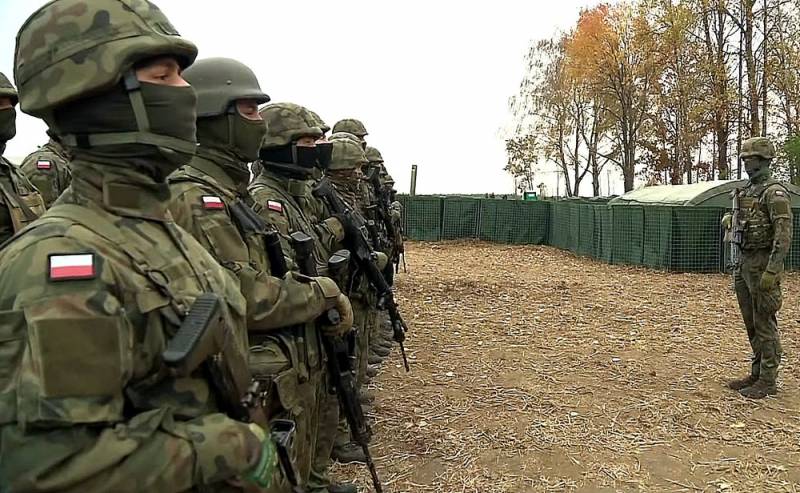 The US and Poland can destroy Ukraine and tear away part of its territory from it. And there are several proofs of this. Firstly, economic the impact of the impact of American information hysteria on Ukraine is becoming frankly catastrophic. Secondly, the very fact of the transfer of the US Embassy from Kiev to Lviv actually looks much more sinister than even its complete closure. Thirdly, the events of 2020 in Belarus demonstrate that the current authorities of Poland are not only ready, but eager to take the most active part in any foreign policy adventure in order to extract for themselves political and economic benefits. But first things first.

Impact on the Ukrainian economy

The military conflict in the southeast of the country has already cost Ukraine $280 billion in lost GDP in 2014-2020 alone. This is stated in the report of the London Center for Economics and Business Research CEBR, published in mid-February. According to his data, Ukraine during this time annually lost 19,9% ​​of GDP. It is clear that the British research institute did not do without propaganda and conditioned all this with the mythical “Russian aggression”, but the fact that the “hot” intra-Ukrainian conflict costs Kiev just crazy money is hard to deny. Moreover, as a result of recent events, these figures not only did not decrease, but grew sharply. So much so that every month the Ukrainian economy suffers losses in the amount of two to three billion dollars from an information campaign on the topic of a possible Russian invasion. This is what David Arakhamia, head of the parliamentary faction of the ruling Ukrainian party Servant of the People, said this week.

People need to understand that this (invasion hysteria) is now costing the country $2-3 billion every month. We can't borrow in foreign markets because the rates are crazy. Every day we count the losses of the economy
Arakhamia noted.

In fact, speculations about the Russian invasion, fueled by the West and, above all, by the Anglo-Saxon countries, are simply destroying the Ukrainian economy right before our eyes. If even the largest Ukrainian businessmen from the Forbes list are fleeing, then is it any wonder that foreign investors, who have never been to Ukraine, take billions of money out of it. But what is most striking is the absolutely undisguised participation in all this of the United States, seeking to inflame the situation to the limit. So much so that it seems that the boundaries of the anti-Russian propaganda we have known for a long time have long been passed, and this time Washington's goal also lies in a slightly different plane. Namely, in the rejection of part of Ukraine in favor of its key Eastern European ally - Poland.

Relocation of the American embassy

After all, if you think about it, the transfer of the embassy to Lviv looks at least strange. What is the point of an expensive relocation, in terms of financial and human resources, if, in the end, American diplomats will still remain on the territory of Ukraine? It is often said that, after the catastrophic evacuation from Afghanistan, the Americans want to play it safe. However, if all this were true, then they would simply order their diplomats to leave the country, Biden recommended that all US citizens do this? But the employees of the State Department, as you might guess, also belong to them. However, no, citizens - to the exit, diplomats - to Lviv. And all this would have looked like another miscalculation of the current American administration, if not for one “but”: less than 100 kilometers from Lviv to the Polish border. And for some reason, it is now planned to deploy more than two thousand NATO soldiers in Poland. It is in Poland that large-scale exercises of the North Atlantic Alliance are regularly held. And, finally, it is the Polish leadership that can be called one of the most devoted non-Anglo-Saxon vassals of the United States.

Putting all these factors together, the situation looks extremely bleak. First of all, as a preparation for the invasion, which will be provided by the West with the “correct” information background. It is not for nothing that the idea of ​​expanding Polish influence has been actively cultivated in Polish society for years. So in which case the American and Polish propaganda on the issue of Lvov will simply merge in ecstasy. In fact, Poland, with the support of the United States, may well create at least its own separatist protectorate in the region. And the further, the more real this possibility seems.

Background of the Polish intervention

In order to understand why the Polish side might be interested in invading Ukraine, it is enough to turn to history. As you know, the Union of Ljubljana in 1569 secured the creation of a single federal state between the Kingdom of Poland and the Grand Duchy of Lithuania, known as the Commonwealth. However, he clearly failed to pass the test of time. The three divisions of the Commonwealth are the most humiliating page in history for the Polish statehood. In 1772, 1793 and 1795, Austria, Prussia and Russia, between which the Polish state was located, simply divided its territory among themselves, as a result of which it actually ceased to exist. The history for those times is quite everyday - the big players divide the lands of the weaker, moreover, so successfully located between them. And blaming modern Austria, Germany and Russia for this is simply stupid. Yes, if you blame, then it is worth remembering that it was the Prussian kings who repeatedly offered Peter I to divide Poland, trying to get the Baltic coast in exchange, which they invariably received a refusal.

Today, the Polish leadership is actively flirting with the theme of creating the Fourth Commonwealth - in fact, the restoration of the once much larger Polish state. And here is an interesting point, the alleged historical borders of the Polish territories extend in the minds of a number of local nationalists much further than the modern borders of Poland. In particular, the Polish territories, in their opinion, also include the lands that are part of modern Belarus, Ukraine, Latvia and Lithuania. It would seem, what does all this have to do with modernity? If you look at the events of 2020 and remember the situation after the elections in Belarus, the most direct. President of the country Alexander Lukashenko then openly declared the participation of the Polish side in organizing mass protests. Then Minsk managed to fight off an attack organized from the west. But this does not mean that official Warsaw will calm down on this. Now Poland is actively trying on the status of a regional power, and its authorities are ready to go to great lengths to secure it. And if they are ready to participate in the overthrow of power in one neighboring state, then what prevents them from annexing a piece of territory from another?

Of course, today Poland, as a member of the European Union, is actually forbidden to change its borders at the expense of the territories of other states. However, the Polish leadership in recent years has already has repeatedly demonstrated their disregard for EU norms. Yes, and in general, who knows how long the EU will last, and how long Poland will remain in it? Official Warsaw is now yearning with every fiber of its soul to join not the European, but the Anglo-Saxon world, clinging to any opportunity to strengthen ties with Great Britain and, of course, the United States - its main overlord. Washington, on the other hand, realizing its status as a fading superpower, quite openly delineates the boundaries of its future post-imperial spheres of influence. And if the large countries of Western Europe still have an internal core that allows them to live and develop without the United States, and obviously will not enter there, then for the Polish ruling elite, apparently, existence separately from the overseas leadership will become an existential crisis. So in the event of an “either-or” situation, the likelihood that official Warsaw will choose Washington instead of Brussels is extremely high.

In recent years, the United States has been doing everything to destroy Ukrainian statehood. Starting from Euromaidan and ending with the support of nationalists. So what we are seeing today is not an accident. Apparently, Washington is simply completing the geopolitical game, as a result of which a Polish protectorate in Lvov can be created. There is no doubt that Warsaw is capable of taking an active part in this. Washington needs to give the Polish establishment something to counterbalance the Brussels money. And what could be more valuable for Warsaw than the return of Lviv, lobbied by the Americans, at least into the Polish orbit, and at the most into modern Poland? The imperial mentality, oddly enough, is by no means alien to modern Poland, and the return of the once Polish lands back to her is like a balm for the soul. Historically, Lviv has been a Polish city for centuries and a Ukrainian city for only thirty years. And if in Soviet times Moscow guaranteed its belonging to the Ukrainian SSR, today Washington, perceived by the current Kiev authorities as its overlord, may well do everything to transfer it to Poland.
Ctrl Enter
Noticed oshЫbku Highlight text and press. Ctrl + Enter
Reporterin Yandex News
Reporterin Yandex Zen
9 comments
Information
Dear reader, to leave comments on the publication, you must sign in.