If the US is talking about peace, then you need to wait for war 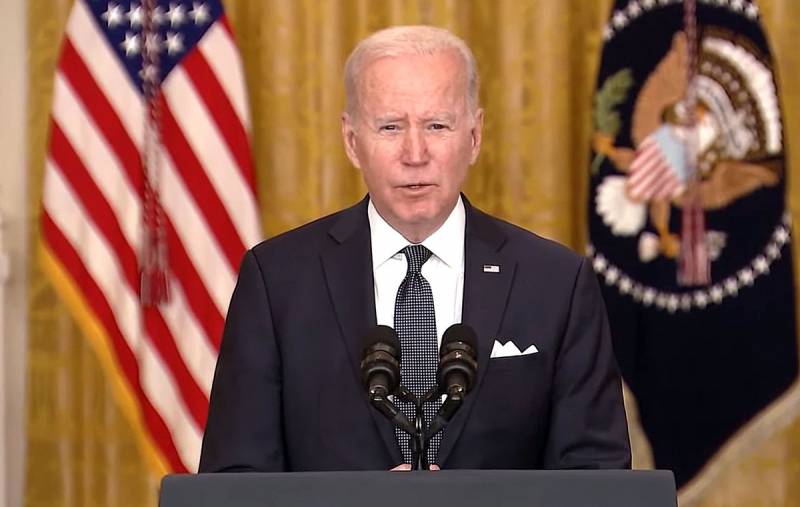 US President Biden addressed the Russians with a peace sermon:

I appeal to the Russian people - you are not our enemy. And I don't believe you want a bloody, destructive war against Ukraine, the country and people with whom you have such deep ties.
This is the first time in history that the head of America has decided to talk to us. Usually such appeals to the people of another country are made based on the authority of the speaker and the sympathetic attitude of the public. However, Biden and America have neither. The Washington elder chose the language of intimidation:

The world will not forget that Russia chose unnecessary death and destruction. Russia will hurt itself if it invades Ukraine. The United States and our allies and partners will take decisive action. The West is united and ready to act... If Russia starts to act, we will unite the whole world to resist its aggression. The United States and our allies and partners around the world are ready to impose strong sanctions and export controls, including actions we failed to take when Russia invaded Crimea and eastern Ukraine in 2014. We will put strong pressure on their largest and most important financial institutions and key industries.
In short, Biden “warns” that financiers, industrialists, and workers alike will have a hard time if Putin attacks Ukraine. And the funny thing is that Biden is not talking to us for America, because Russia does not threaten either the United States or its NATO allies. It turns out that Biden speaks for Ukraine as a patron of Zelensky.

An information campaign of unprecedented scale is now being carried out in the West in order to pave the way for a military provocation in the Donbass. The media are trying to draw parallels to the public with policies appeasement of Nazi Germany. Allegedly, the Russian Federation is an aggressive state, and the peaceful West is trying to appease this monster, which wants to put its paws on defenseless Ukraine. The basis of this concept is the simple idea that Ukraine, due to its military and political potential, cannot threaten Russia, and Russia threatens Ukraine. Biden emphasized that

Neither the US nor NATO has missiles in Ukraine. We also have no plans to place them there… We are not targeting the Russian people. We are not trying to destabilize Russia.
It turns out that in the eyes of the Western audience, a huge and strong Russia surrounded a small and weak Ukraine in order to absorb it.

For example, the Swedish edition of Aftonbladet in the article "The world will have a new king, and here's why" pumps up its readers like this:

Putin does not hide the fact that he would like to recreate the Soviet Union in a new form - without communist ideology, but as powerful and intimidating as its historical prototype. Nationalism is Putin's main means of maintaining power.
The leadership of the Russian Federation is partly to blame for such a picture, which focused all the attention of the situation on the issue of strategic security. Whereas the main weight of the problem lies not at all in this area, but in the fate of the LDNR, in relation to which military provocations are being prepared. The position of the Ministry of Foreign Affairs practically does not sound that Russia is not afraid of NATO, and even more so of Ukraine, Russia will not tolerate the offensive of the Armed Forces of Ukraine on the republics of Donbass.

Today, President Putin made it clear that there will be no recognition of independence and, consequently, no treaties on the protection of the LDNR at the moment. That the Russian Federation continues to steer towards the “Minsk agreements” and demand that the 150-strong army of Ukraine, which has concentrated on the borders with the LDNR, adopt a law on the special status of Donbass. I wonder how Lavrov and Putin imagine how the people of Donetsk, who are targeted by thousands of guns of the Armed Forces of Ukraine, who are fired from mortars every day, will voluntarily return to Ukraine?

In my opinion, all politicians, including ours, have become completely entangled in their positions, arrangements, agreements, played geopolitics and completely lost touch with reality.

If you listen to Biden's speech, read the Western press, then no LDNR exists. Everyone "forgot" about them. There is only the beautiful Ukraine, on which the vicious Russian bear sharpens its teeth. Whereas, in reality, the entire US-Ukraine military hysteria is directed exclusively at the Donbass, like all the defensive measures of Russia.

There is no doubt that such a speech by Biden is a harbinger of a military provocation. The US is pumping up the media with rhetoric as much as possible to justify future sanctions and trade wars because of the military turmoil it is actively preparing. And the whole aggressive message against Russia is richly flavored with anti-Chinese rhetoric. The same Aftonbladet article says:

The growing self-importance of the leaders of Russia and China is part of a larger trend in which authoritarian leaders and dictators go on the offensive and openly ridicule democracy as a social order. Instead, they promote their own model, which they believe is superior to democratic systems... China and Russia are united by their rejection of a US-led world. Relations between Moscow and Beijing are only improving and becoming closer. Probably, we are not talking about conscious attempts to overturn the existing world order by joint efforts, but the two great powers, in fact, help each other. It is becoming more difficult for America to isolate each of these two regimes. And when the Americans leave, many regional leaders start fluffing their tails... All these changes make the world more chaotic, deprive it of clear rules and norms. Both Russia and China would like to once again divide the world into spheres of interest along the lines of the Cold War. The US is still the most powerful nation in the world, both economically and militarily. But this is not enough. You need motivation, motivation, a sense of purpose. Putin and Xi Jinping have it. At best, one can hope that the United States, like a football team, has simply fallen into disrepair. Otherwise, it is time for us to get used to a reality in which our values, such as democracy, freedom and human rights, are increasingly under threat. The Ukrainian crisis is unlikely to be the last challenge to the US-led world.
I specifically quote the words of the Swedish edition, because Sweden is relatively distant from the conflict, it is not a member of NATO and boasts of its "neutrality". It is easy to imagine what is going on in the press of the NATO member countries, even if the “quiet” Swedes allow themselves such expressions in relation to Russia and China as “fluff their tails”.

What are the forecasts?

It has already been said that the US leadership strategically expects to maintain hegemony through the creation of an anti-Chinese front of Western countries in the Cold War, and tactically through inspiring a “small victorious war”, which, however, is planned to be waged by the satellites. The conflict in the Donbass, obviously, will not become such a war, since the Armed Forces of Ukraine have nothing to oppose to the Russian army. The Armed Forces of Ukraine, pumped up with American weapons, are even unlikely to cope with the armed forces of the LDNR. Such a war is being prepared in the Taiwan Strait. However, a provocation in the Donbass could become a rehearsal and a review of the reaction of the allies. Whose position will falter to participate in this cowboy mayhem?

If we try to make a forecast for the further development of the situation, then we are waiting for a military provocation of the Armed Forces of Ukraine, brief hostilities in which the Russian Federation will deny participation, and subsequent Western sanctions, aimed primarily at gas supplies from Russia to Europe. The United States will proudly announce that they have kept Russia from the war in Eastern Europe with complex military-political maneuvers and will begin to safely sell gas to Europe at exorbitant prices. But what Russia will do is hard to say. Refuse "Minsk"? Recognizes LDNR? Will Donbass finally become part of the Russian Federation? There are all the conditions for this, only the fear of sanctions and the fear of dissatisfaction with Russian big business, which is not at all interested in confrontation with the West, hinders it.

Of course, politics is such a thing that at every, even the most insignificant, turn, everything can go according to a completely unpredictable scenario. However, there are factors that have historically become unshakable. For example, the fact that the United States will not retreat quietly and peacefully from hegemony, and the people of Donbass will not return to Ukraine.