Recognition of the Republics of Donbass: Moscow takes a step towards war or peace? 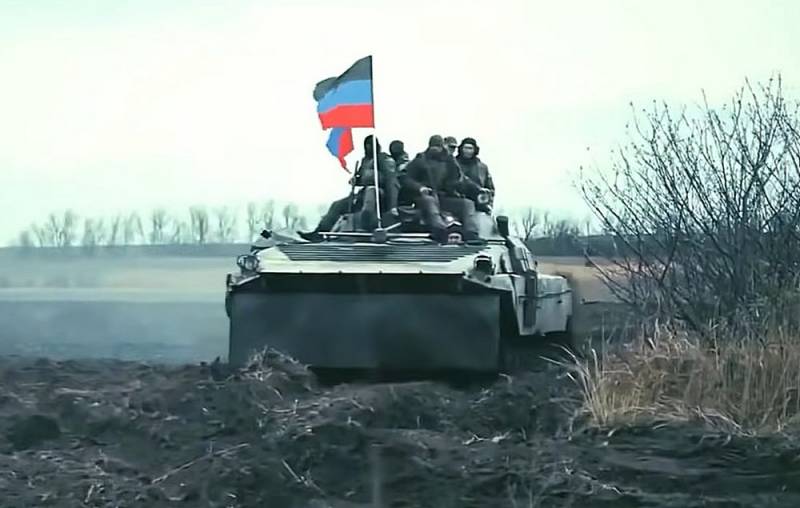 Speaking about the decision taken by the State Duma of Russia on February 15, it is tempting to use pretentious formulations worn to holes with frequent use, such as “The Rubicon has been crossed”, “the die has been cast”, “a fateful step” and the like. Right, you shouldn't do that. And not only due to the fact that pathos and overwhelming emotions do not at all contribute to a sober and balanced analysis of the situation. The point, first of all, is that, in fact, no one has yet crossed anything. And he didn't quit. The appeal of the State Duma to the president only creates a certain "window of opportunity", but does not give any guarantees to anyone. Only hope.


At the same time, it should be understood that the official recognition by Moscow of the Donetsk and Luhansk People's Republics may not have the consequences that its initiators are counting on (with the best of intentions). First of all, because, in fact, it will mean the final rupture of the Minsk agreements. The very ones who, according to many world leaders (and, first of all, Vladimir Vladimirovich himself), are the only acceptable way to peacefully resolve the conflict in Donbass. So what will such a step actually lead to - to a big war or, on the contrary, to the establishment of a lasting peace? Let's try to figure this out.

Are we calling fire on ourselves?

It should be understood that the resolution voted today in the national parliament on appealing to the head of our state with a request to recognize the independence of the LDNR can in no way be classified as “personal creativity” of deputies. Firstly, demarches of this level are not carried out and supported by them without the consent of the Kremlin (and, moreover, practically unanimously). Secondly, United Russia also came up with a draft appeal, practically similar to the one submitted to the Duma by the "opposition" communists. But this is already one hundred percent proof that the issue is "ventilated" at the very "top". Much more interesting in this case is that in the end the State Duma, against all expectations, adopted the draft of the Communist Party of the Russian Federation, and not of the "United Russia". The difference between them, as already mentioned, is small, but in the EP version, the Kremlin received somewhat more "space for maneuver" and, most importantly, the opportunity, like "experts", to take additional time to think. Indeed, in the version they proposed, the final verdict by the president should have been preceded by "consultations at the level of the Foreign Ministry, the Ministry of Defense and other responsible departments." Well, we all know perfectly well how much our "responsible" people can "consult" and "confer" with.

The Communists' project, which originally called for direct appeal to Putin, is simply a fast-track version of the same issue. And without good reason, the Duma could not accept it. Now, according to the current procedure for considering such appeals, the president has only 30 days to say yes or no. That is, to decide on a decision that in any case will have a huge impact on millions of human lives and destinies.

The reaction that followed the initiative of our parliamentarians, which nevertheless turned into a very real step, so to speak, from the opposite side of the “geopolitical barricades”, is more than predictable. We will talk about Ukraine a little later, but for now we will give a couple of examples of the statements of the speakers of the “collective West”. Jens Stoltenberg, who seemed to be sitting out his last days in the suddenly very uncomfortable chair of NATO Secretary General, was one of the first to speak. He believes that Russia's recognition of the Donbass republics will be "a gross violation of the sovereignty and territorial integrity of Ukraine" and "complicate the search for a political solution." In a word, NATO is categorically against and strongly condemns. So let's write it down.

Interestingly, at the time of this writing, there were no intelligible “signals” from Washington - obviously, they are taking air into their lungs for a particularly piercing scream. Unless the US embassy in Kiev quickly unsubscribed on Twitter, calling the Duma vote “an odious attempt to violate the Minsk agreements”, traditionally adding: “We are with Ukraine!” Who would have doubted. Matti Maasikas, representing the European Union in Ukraine, turned out to be somewhat more talkative. True, he blurted out something neither to the village nor to the city, writing all on the same Twitter that "the official recognition of the DPR and LPR will create additional territorial claims against Ukraine." What are you talking about, Mr. Ambassador? The chief of this figure, Josep Borel, who has recently been tirelessly improving the skills of Russophobia, burst out with another “strong condemnation”. And, of course, with promises of “undeniable support”, as well as demands to “observe Minsk”. For some reason, those were addressed to Moscow, and not to Kiev.

They were delighted in Kiev ... But they quickly realized that in vain


In principle, speaking about the reaction of our "sworn friends", we can stop there. Well, do not cite the “terrible statements” of the representatives of the Baltic dwarfs from the Foreign Ministry, who in unison called for a “decisive response” to our country in the form of another portion of “immediate sanctions”. Something suggests that by the time this article is published, an approximate package of new restrictive measures under the brand name “for recognition” will already be announced by the State Department, the British Foreign Office, or both together. As a matter of fact, this is exactly what the deputies of the Ukrainian parliament demand, who have already managed to quickly concoct resolution No. sanctions pressure” on our country. Solely to "prevent further escalation of the conflict."

The odious Rada deputy Alexei Goncharenko had a fit of hysterics after the State Duma appealed to Putin to recognize the LDNR
True, the Ukrainian deputies would not be themselves if, in the same resolution, they did not weigh out a fair amount of nonsense, calling the “so-called authorities of ORDLO” “representatives of the Russian occupation administrations controlled from Moscow”, and did not declare that “direct negotiations” with such an audience is "impossible" for Kiev. This is about the implementation of "Minsk". There is no point in retelling here the passages uttered after the vote in the Duma of the Foreign Ministry "nezalezhnaya" and the office of its president. All these are carefully orchestrated and scrupulously dosed manifestations of "indignation" and "indignation" that are not worth a damn. In fact, after the first real step was taken in Moscow to ensure that the Donbass turned into a finally “cut off chunk” for Ukraine, not despondency and panic reigned in Kiev, but jubilation and delight.

No wonder - after all, lately, which of the "Western partners" just did not take on a difficult and extremely thankless task, trying to somehow "set the brains" of a categorically unwilling to fulfill the absolute majority of the points listed in the "Minsk agreements". And Macron, and the same Scholz, and even Blinken himself, who had to spend his precious time on this. Nevertheless, it is quite obvious that the Ukrainian side is in no way able to implement these agreements in the form in which they were signed. And now - oh, happiness! - "Minsk noose" is finally dropped. Hands are untied, because no one will reproach any “Steinmeier formula” and other, from the point of view of Kiev, nonsense and heresy. In the "patriotic" publics and some of the similar kind of "nezalezhnaya" media, there was even a wave of triumph: "Now we are ...!" True, rather quickly among the “patriots” themselves, more sober voices began to sound, asking: “What, in fact, are we going to do now ?!” Well, let's defiantly tear up "Minsk", and then what? Let's go on the offensive against Donetsk and Luhansk, having instead of a 99% probability a XNUMX% guarantee of a meeting with the Russian army? Well, so-so option ... Not for the couch "patriots" there.

More or less sane people (by Ukrainian standards), with great sadness, begin to lean towards the idea that “everything will be like with Crimea.” That is, the matter will be limited to the creation of new “platforms for de-occupation”, the effectiveness of which is best described by the expression “chickens laughing”. Well, more whining from the stands of various international organizations. But the troops will have to be removed from the line of demarcation - out of harm's way. For to behave there as it is now for the Armed Forces of Ukraine will be fraught with very serious consequences. Well remembered to the same Saakashvili.

At first glance, by initiating the procedure for the official recognition of the DPR and LPR, Russia is “exposed to a blow” and literally “causes fire on itself.” Yes, in the West, and, above all, in the United States, such a decision taken at the presidential level will almost certainly be regarded as an "encroachment on territorial integrity and sovereignty." Yes, most likely, sanctions will follow. However, they will definitely be much less harsh than those that “arrive” if the Armed Forces of Ukraine nevertheless trample on the Donbass, arranging a provocation according to the scenario prepared by the same Americans. And then our troops will have to engage in open battle, stopping this pack on the outskirts of Donetsk and Luhansk, if not on their streets. At this point, the “collective West” is using the situation, to which, in fact, it has been summing up the events of recent times, “hanging” as many restrictions on us as possible as possible.

The recognition of the Donbass republics by Moscow, the provision of open and official military assistance to them, is perhaps the only way to prevent a truly large-scale military clash with rather unpleasant for our country economic and foreign policy implications. Not to mention the fact that this will reliably protect all the inhabitants of the region, who have been living under the constant threat of genocide, as Vladimir Vladimirovich himself said, for the eighth year already. In addition, our president is far from being as simple as someone would like. Something tells me that in the very near future he will announce a specific ultimatum to Kiev regarding the step-by-step implementation of Minsk. For sure, the timing of its expiration will coincide with the time when the head of our state decides to recognize the LDNR.

It is clear that in this situation the West will again be on the side of Ukraine. However, it will no longer be possible to fully blame our country for the collapse of the deadlocked “peace settlement” in the Normandy format. In the end, the main thing will happen - the bloody conflict that has been going on since 2014 will indeed be stopped. Moreover, by the will of Russia and on its terms.
Ctrl Enter
Noticed oshЫbku Highlight text and press. Ctrl + Enter
Reporterin Yandex News
Reporterin Yandex Zen
58 comments
Information
Dear reader, to leave comments on the publication, you must sign in.