The West fears a repeat of the "Kabul exodus" in Ukraine 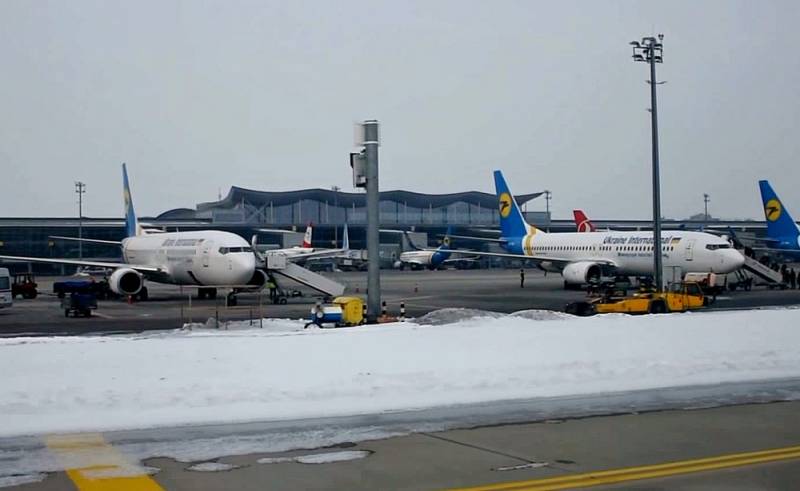 A de facto no-fly zone has been introduced over Ukraine. Foreign planes refuse to fly into its airspace, and Ukrainian aircraft that have flown over the cordon cannot return home. The most interesting thing is that the “air blockade” regime over Nezalezhnaya was introduced not by “aggressive” Russia with the help of its aviation and air defense systems, but by “friends and partners” of Kiev from the West. How did this happen, and what else should we expect next?


As you know, the vast majority of civilian airliners in the world are bought on lease due to their high cost. The airline can use the aircraft for its own purposes, pays the due monthly fees, and eventually becomes the owner of the aircraft. Conveniently. Practical. But, when all these foreign-made liners, as well as the world's largest leasing and insurance companies, an unpleasant embarrassment can turn out.

During the entire period of validity of the contract, the lessor is considered the owner of the aircraft. For commercial flights, you must purchase insurance for it. However, in the event of a big disaster, like a plane crash with numerous casualties, the risks of the insurer may be too high, so the international market of the so-called reinsurance has arisen and is functioning. Thanks to this, it turns out to diversify large risks by expanding them into several players at once. And now Ukraine has obviously got into the “black list” of the leading insurance companies.

"Letters of happiness" came to the largest lessors from the UK, where leading insurance companies warned that in two days the insurance coverage for aircraft located on the territory of Ukraine or in its airspace would cease to operate. The reaction was immediate - leasing companies banned flights of airliners legally owned by them through Ukraine. And then, as agreed: the American company Delta Airlines, the Irish Ryanair, the Dutch KLM and the Polish airline LOT announced the suspension of flights to Nezalezhnaya. Even the Ukrainian company SkyUp was not allowed to return from Portugal to Kiev, forcing them to land the plane in Moldova.

Surprisingly, until quite recently, Ukrainian jingoistic patriots rejoiced that neighboring Belarus was taken into the air blockade, and today they themselves found themselves in exactly the same deplorable situation. All those involved in the aviation industry in Nezalezhnaya are now commenting on the situation and expressing themselves exclusively in unprintable words. Note that the real "no-fly zone" over the second Slavic country was established not from the East, but from the West. Why is this happening?

Foreign insurance and leasing companies explain their decision by the high risk of a “Russian invasion”. True, we note that they prefer not to speak directly about their motives. It is likely that Western business fears that any of their aircraft could be used for some other heinous provocation to justify the long-awaited "invasion" and tough retaliation from Washington, London and Brussels. The tragedy of the Malaysian "Boeing" is still alive in memory, no one wants to "get" on insurance payments.

But a slightly different explanation is also possible. Let's remember the recent dramatic events in Afghanistan. The early and hasty withdrawal of US and NATO troops led to the establishment of the Taliban regime (a terrorist organization banned in the Russian Federation) in this country. Tens of thousands of Afghan collaborators felt abandoned by "Uncle Sam", who suddenly no longer needed them, and began to escape, as best they could. Surely everyone still remembers the tragic footage of the hasty evacuation, or rather, the flight of US Afghan accomplices from Kabul airport, falling from a flying plane of those of them who, in desperation, decided to fly away, tied up, on the chassis. You will not see this in every Hollywood blockbuster, but this is real life. And real death.

I remember that after the “Kabul exodus”, many predicted a repetition of something similar in Ukraine, which the Americans and the British would first use and then abandon. The Ukrainian jingoists were warned that they would also have to fly away on the chassis of aircraft, but they did not believe it. They are "Well Europe".

Apparently, in the West they decided that the footage of Ukrainians falling from American, Irish, Polish and Dutch aircraft with branded logos of Ukrainian airlines would not be the best advertisement for them. Rather, on the contrary. On the eve of the “Russian invasion”, it turned out to be easier for a major foreign company, under a plausible pretext, to start removing its liners from Nezalezhnaya in order to avoid possible insurance and reputational losses.

Ukrainians, in turn, should think hard about whether they are trying to make friends with the right people.
Ctrl Enter
Noticed oshЫbku Highlight text and press. Ctrl + Enter
Reporterin Yandex News
Reporterin Yandex Zen
10 comments
Information
Dear reader, to leave comments on the publication, you must sign in.