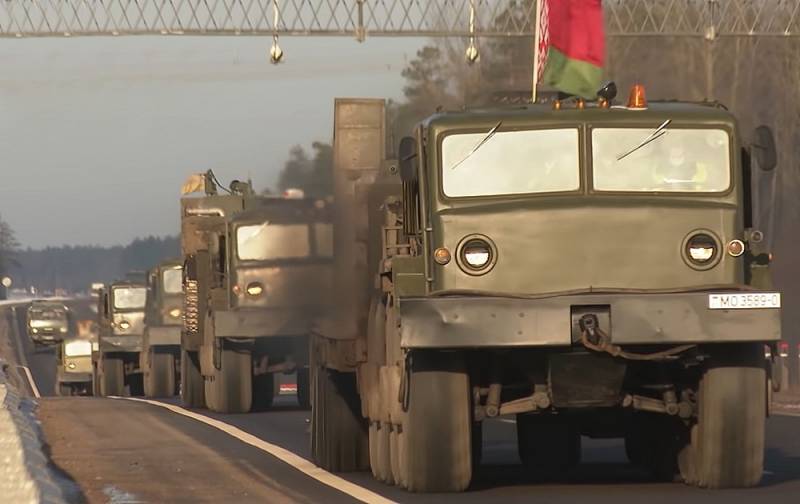 The United States cannot name the exact date of the “invasion” of Ukraine. This was announced on February 13 by Assistant to the President of the United States for National Security Jake Sullivan.

We cannot predict the exact date (...) invasion, hostilities from Russia in Ukraine could start any day
- he noted.

Nevertheless, all this looks extremely strange, because Sullivan actually refuses to confirm the words of his own leader. According to Politico, US President Joe Biden said in a video conference with allied leaders late last week that Russia was allegedly going to attack Ukraine on February 16. At the same time, it would be naive to assume that there was a misunderstanding within the highest echelons of the American administration. The situation rather looks like a frank preparation for a provocation. Moreover, provocations, which the American side intends to create with someone else's hands. No wonder Biden recently stressed that he would not send troops to Ukraine, including to evacuate fellow citizens, explaining that if the Americans and Russians shoot at each other, a world war will begin.

Under no circumstances will American troops be sent to Ukraine. If Americans and Russians start shooting at each other, it will be a world war

Biden said during an interview with the American television channel NBC.

It is clear that Biden does not want a world war because he understands that it will end for the United States with guaranteed destruction. But as for the start of a major European conflict, everything does not look so optimistic. Given the number of NATO troops being deployed and the amount of lethal weapons being shipped, the likelihood of war in eastern Europe is extremely high. And it is already becoming clear today that the United States not only does not seek to avoid it - as the pro-American media say, but on the contrary - they are doing everything to escalate the situation to the limit.

USA with their internal political and economic problems now desperately need a new war. But it seems that there is no one to bomb in the Middle East. Yes, and somehow all this is dangerous against the backdrop of such a sensitive defeat in Afghanistan. It is much more profitable to inflate a new conflict and extract from overseas political and economic dividends. And in order to understand the geopolitical strategy of the United States, it is enough to look at the world through their eyes. Three new poles of power are clearly emerging in the world: Russia, China and the European Union. And during the crisis in the Ukrainian direction, the United States is trying to push two of them. The least stable of the poles, the European Union, is an artificial supranational formation with a dubious balance of central and regional power, moreover, it does not even have its own troops and is not able to force its members to fulfill their obligations (Polish demarche to European legislation, closure of internal borders during the period pandemics, etc.).

The Russian Federation, in the eyes of the United States, is primarily the legal successor of the USSR, which replaced (as many believe, as a result of a special operation by the West) communism with capitalism, but did not abandon its geopolitical goals. In fact, Russia is the last great European power. And what is especially important for Washington, a power that prevents the United States from completing the work of total dominance on the entire European continent. After all, it is precisely the final transformation of Europe into a US colony that is the ultimate goal of Washington, which, first of all, confirms the experience of the past thirty years. If such a goal had not been set, NATO would have been disbanded as early as 1991, immediately after the collapse of the military bloc of socialist countries opposing it - the Warsaw Pact, and would not expand at the expense of its member states. No, the United States has been moving towards sole Euro-Atlantic dominance for too long and systematically for today's events to be accidental. After all, inciting a conflict in the Ukrainian direction is beneficial to the United States not only in the short term, but also in the long term.

First, a full-scale war in Europe will inevitably lead to the collapse of the shares of the European and Russian stock markets and the fall in the competitiveness of enterprises from the EU and Russia. After all, in the event of a sanctions war, the EU will lose the largest supplier of raw materials, and Russia an important sales market. Of course, recovery and reorientation will not be long in coming, but it would be naive to expect that the Americans will not take advantage of this period.

Third, the war will justify the presence of US troops in Europe and the need for NATO. And also sharply and for a long time to increase defense spending, which in too many European countries began to fall short of the coveted 2%. Which country is the largest supplier of weapons to NATO countries and sells the most weapons in the world, making good money on selling fear to Europeans - needless to say.

Good mine at bad game

To create a hotbed of conflict, unleash a new sanctions war and shout about freedom and democracy at the same time - the US plans to escalate the crisis look obvious. That's just the main thing for Washington with all this to remain "clean" for Brussels. After all, if Russia can be declared an adversary and openly played against it on all fronts, then for the EU such frankness will turn out to be so harsh that the “caring” boot of an American soldier can quickly end up on the other side of the Atlantic.

So it's important to keep a good face on a bad game. That is why the US is struggling to demonstrate its assistance to the European Union. The US administration is now defiantly trying to turn the world upside down to find gas for the EU by negotiating with companies in Qatar, Nigeria, Egypt and Libya. But, judging by the absence of any boastful statements from Washington, they did not lead to anything. The only dubious achievement of the United States in this direction is the “pushing through” of the Japanese leadership, which agreed to share liquefied gas. However, only in words, without any documentary guarantees. In addition, it is still unclear whether this will come from domestic stocks or from reserved supply contracts for Japan. In general, vaguely, incomprehensibly, but formally, Washington is helping Brussels. For pro-American propaganda that has gone to martial law, it will do. At the same time, the United States does not forget not only to support the EU, but also to actively pump the region with tons of lethal weapons.

The eighth bird has arrived in Kiev! The weight of today's cargo of ammunition for our armed forces is 86 tons! Since January 22, 2022, our US partners have sent more than 650 tons of defense equipment to Ukraine! To be continued
- said on February 5, Minister of Defense of Ukraine Oleksiy Reznikov.

But these “birds” are not doves that bring peace. These "birds" are carrying weapons that will kill people. And the joy about it looks about the same as the celebration of the massacre that can happen if it is used. Although in Washington - a prominent defender of human rights, of course, they will only applaud "courage and courage".

Historically, the US is nearing the end of its world hegemony. And the closer it gets, the more unpredictable steps Washington will be ready to take in order to maintain its position. Unlike the peacefully disintegrated USSR, in the case of the United States, the world seems to be in for a long agony, which will continue until the United States realizes the final geopolitical defeat and moderates its imperial fervor. We can only hope that as few people as possible die in the process. Alas, Washington's experience of waging wars teaches us that the civilian population of other countries is only expendable material for it, which can be destroyed by anything: from cluster bombs to nuclear weapons.
Ctrl Enter
Noticed oshЫbku Highlight text and press. Ctrl + Enter
Reporterin Yandex News
Reporterin Yandex Zen
2 comments
Information
Dear reader, to leave comments on the publication, you must sign in.