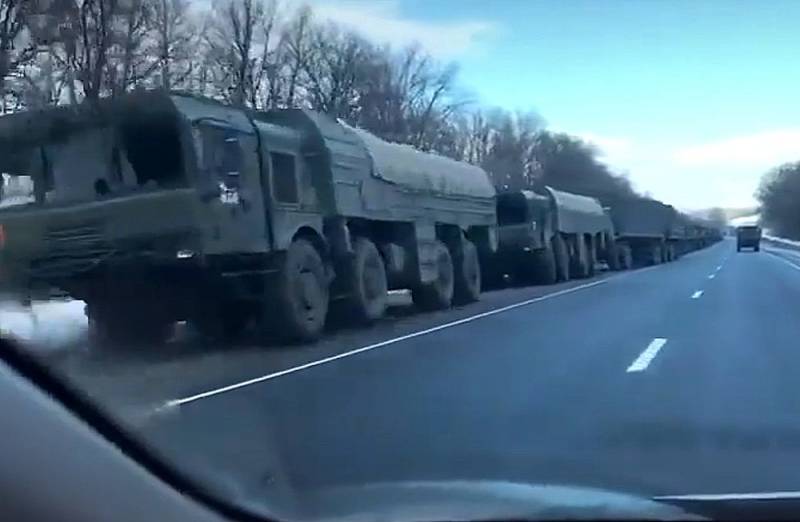 Fresh videos have appeared on the Web showing the movement of operational-tactical missile systems of the Iskander family and ammunition for them in the Belgorod region of Russia.


Eyewitnesses recorded on footage at least 15 KamAZ trucks, as well as the launchers themselves, moving under their own power along a public road, or standing on the side of the road.


We remind you that earlier eyewitnesses documented in the Kaluga region of Russia movement in the western direction of the OTRK of the Iskander family and ammunition for them by rail. These OTRK in the amount of at least 15 launchers arrived to Belarus at the end of January, which caused anxiety among "partners" in the West.

Note that the RF Armed Forces officially have 13 brigades (12 launchers each) and 1 division (4 launchers) with two versions of the OTRK: Iskander-M with a pair of 9M723 quasi-ballistic missiles and Iskander-M with a pair cruise missiles R-500. It is assumed that in the European part of Russia (including the Kaliningrad region) and in Belarus, out of the indicated total number will gather until February 20, 11 brigades and 1 division.

The presented videos indirectly confirm this. But how many additional Iskanders with missiles were brought to the Russian-Ukrainian border and to Belarus is unknown. They know about it only in the Russian military department.
Reporterin Yandex News
Reporterin Yandex Zen
3 comments
Information
Dear reader, to leave comments on the publication, you must sign in.