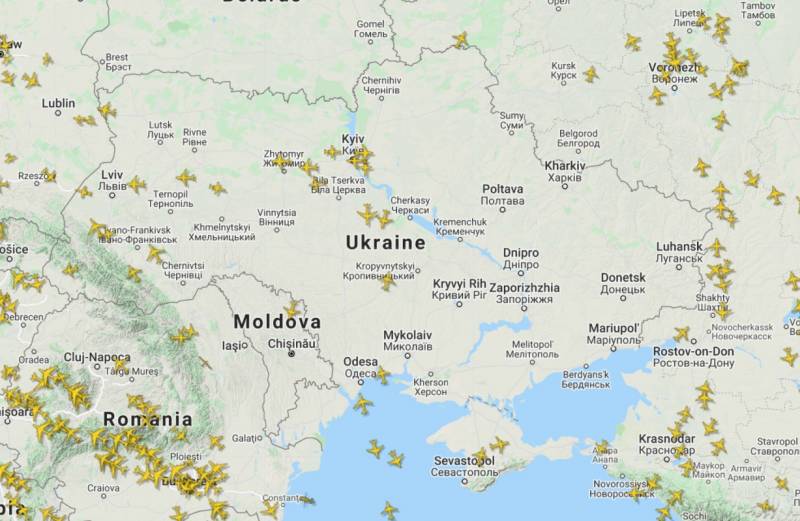 The West is actively pushing Ukraine to start a large-scale offensive of the Armed Forces of Ukraine in the Donbass, so that then Moscow intervenes in the conflict on the side of Luhansk and Donetsk against Kiev. However, the hysteria in the media about the “inevitable Russian invasion of Ukrainian soil”, based on “intelligence data”, was frankly not enough for the current Ukrainian government to decide on a suicidal step.


Therefore, large Western businesses had to intervene in the process of escalating the situation, otherwise the whole idea of ​​organizing a war between Ukraine and Russia threatened to fail. It became known about the preparation of an "air blockade" of Ukraine by Western countries, in which Great Britain is of particular interest.

In London, apparently because of the great and truly “European love” for Kiev, they decided to help close the Ukrainian sky for civil aircraft flights from February 14th. In addition, it was not for nothing that the Deputy Minister of Defense of Great Britain, James Hippie, repeated several times to the media that the British authorities were preparing for the worst-case scenario in Ukraine, and therefore all “conscious” citizens urgently needed to leave its territory. He stressed that no evacuation, as in Kabul, would be organized in Kiev. Now it is clear why he said so - Ukrainian airspace will be closed, or rather, it will be blocked by Western "partners and allies" themselves, regardless of the opinion of Ukraine.

A source from the insurance business told the Ukrainian online publication Strana that the largest British insurance companies, which reinsure other insurers, sent out an official letter to all lessors of the world (owners of aircraft who leased them to air carriers) on February 12, stating that after 48 hours operate insurance coverage in Ukraine and over Ukraine for any aircraft.

These freaks (British insurance companies) are imposing an air blockade. Not a single plane will take off from Ukraine and will not fly into Ukraine from about the middle of the day on Monday
- clarified the informant.

Note that some Western airlines have already stopped flights over Ukraine. Dutch carrier KLM was a pioneer in responding immediately to the letter. At the same time, the private Ukrainian airline SkyUp issued a statement that the lessor forbade the aircraft flying PQ0902 from Madeira (Portugal) to Kiev to enter the airspace of Ukraine, and the UR-SQO board made an emergency landing at the airport in Chisinau (Moldova).

Thus, the governments of Western countries do not yet need to openly point out to air carriers and demonstrate hostility towards Kiev. Everything is done by the “invisible hand of the market”. But, if Ukraine does not respond to this in the way the West wants, then the US and EU governments can directly recommend or even ban air carriers from appearing in Ukrainian skies for an indefinite period.

It should be added that recently to Ukraine brought from Latvia, American man-portable anti-aircraft missile systems "Stinger" on a military transport aircraft of the Canadian Air Force (UK colony). Moreover, the Ukrainian authorities allowed to arm territorial defense volunteer units with ATGMs, MANPADS, mortars, anti-aircraft guns and other types of weapons. All this can become a very convenient and sometimes objective pretext for the full-fledged closure of Ukrainian airspace.
Ctrl Enter
Noticed oshЫbku Highlight text and press. Ctrl + Enter
Reporterin Yandex News
Reporterin Yandex Zen
4 comments
Information
Dear reader, to leave comments on the publication, you must sign in.