Russia can return Ukraine without war through "humanitarian intervention" 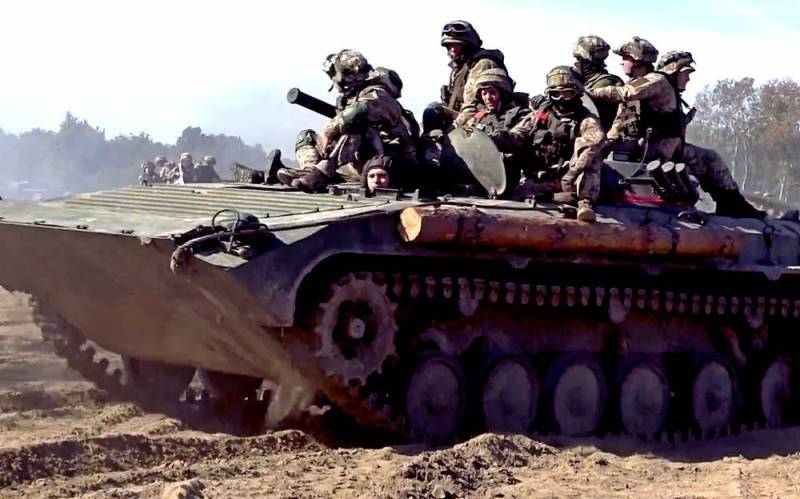 The further the events around Ukraine develop, the higher the likelihood of Russia starting a war with this country becomes. A year ago, at the same time, our troops were in exactly the same way drawn up to the adjacent borders, large landing ships of the Baltic Fleet were being driven into the Black Sea. Then everything worked out, and the military contingents returned to their places of deployment. This time it may not be possible, since the events are taking place against the backdrop of a public refusal of the NATO bloc to carry out the “Putin ultimatum”. Just withdrawing troops now means losing face to the Russian president. What are the options for further action?

Do Russian wars want to happen?

Reading the domestic press and analytics, one simply marvels at the flight of fantasy of some authors. From article to article, the theses are repeated that it is the United States and the collective West that really dream of dragging Russia into a war with Ukraine, which, of course, it does not need: neither the war, nor Ukraine itself with its “sharovarniks”. Others, for some reason, believe that President Putin is "conducted" by Comrade Xi, who only decides whether there will be a Russian-Ukrainian war or not. All this is so strange.

To understand what the West really wants or, on the contrary, is afraid of, it is enough to carefully look at what the foreign media write, our former compatriots who emigrated to the United States, Canada or Israel for ideological reasons, as well as domestic liberals who stayed with us. So: they are all terribly afraid that the Kremlin will finally show a tough will and solve the “Ukrainian problem”.

What will the return of Nezalezhnaya to the bosom of the so-called “Russian world” give Russia? Much!

At first, the shameful stain of complicity with the Ukrainian Russophobic regime will be washed away, which was first recognized by the legitimate authorities, and then for many years was supported by the supply of motor fuel, fuels and lubricants and other resources. For the victorious country of the Third Reich, the trickery with Western puppets standing on the shoulders of neo-Nazis is an unacceptable shame. This is a gross and unforgivable violation of all our symbols and meanings.

SecondlyBy returning Ukraine, the Russian Defense Ministry will eliminate the absolutely real threat of deploying on its territory American anti-missile and strike systems capable of carrying nuclear warheads. From near Kharkov, a Tomahawk with a nuclear warhead will fly not only to Moscow, but will also reach beyond the Urals.

Thirdly, the return of Nezalezhnaya and its accession to the Union State will lead to the restoration of all previous industrial and trade ties, which will benefit all three Slavic countries - Russia, Ukraine and Belarus. Jobs will reappear at Ukrainian enterprises, prices for energy resources that can be bought directly, and even at a discount, will become comfortable. The domestic military-industrial complex in cooperation will be able to quickly rearm the army and navy.

Finally, the social situation in Ukraine itself will be able to normalize. No more Russophobic propaganda that brainwashes the remnants of the brain every day. The Russian language will receive the status of the second state language. Family and kinship ties between countries broken after the Maidan will begin to be restored. Is this not enough?

And do not throw propaganda cliches in the spirit of what, they say, will have to "feed the sharovars"! Ukraine is a country with great potential and hardworking people. It will feed itself, it will be enough to help with recovery economic connections and access to the domestic Russian market.

Thus, Russia needs Ukraine, and how. The question is what price is she willing to pay for it.

An absolutely bloodless scenario was seen from February to May 2014, when there was no recognized power in Kiev, and the legitimate president Yanukovych was in Rostov. In the Kremlin, it was enough to show will, and the Maidan would have ended according to the “Belarusian” or “Kazakhstani” scenario. But, alas, this unique historical opportunity was mediocrely lost. Now there are only bad options left, one worse than the other, and you have to choose from them.

Unfortunately, it’s not easy to enter Ukraine now. Over the past 8 years, the Armed Forces of Ukraine have increased in number to 261 people. The training, discipline and controllability of the troops has increased. Alas, there will definitely not be an easy walk, despite the declared superiority of the Russian army over the Ukrainian one. Some will run, some may even come over to our side. But there are those who will honestly fulfill their military duty. Do not forget that exactly the same Russian guys from the South-East serve in the Armed Forces of Ukraine, who, by their national character, stand on the defensive, in their native land. You shouldn't oversimplify everything. Smooth only on paper. There will be blood, lots of it. At both sides. This is the payback for 8 years of doing nothing. But you can't do anything anymore!

The key question is how far the Kremlin will be ready to go now, if in 2014 they did nothing under the most favorable circumstances. There are three main options, which may have their own sub-options.

First and most stupid is to confine ourselves to a local armed conflict in the Donbass. To shed a lot of blood in order to move forward a little, taking several settlements that no one needs, and then again trying to return them to Ukraine back through the conditional Minsk-3. However, the capital of Belarus is unlikely to be used as a platform for negotiations now. Judging by the activity of President Erdogan, bargaining, senseless and merciless, will move to Ankara or Istanbul.

The second option suggests a large-scale offensive across the territory of historical Novorossia, something that should have been done in 2014. Then Moscow will cut off Kiev from the Black Sea, all its most important industrial enterprises, which will make it possible to strangle the Russophobic regime economically. However, there is a risk that the NATO bloc will respond with a counter entry of troops into the rest of Ukraine.

Third Embodiment - this is the occupation by Russian troops and the militia of the LDNR of the territory of the Left-Bank Ukraine with Kiev, the Nikolaev and Odessa regions with access to Transnistria. For sure, the Right-Bank Ukraine will be occupied by NATO troops, and the Dnieper will again become a historical border. Our sphere of influence will then have the most strategically important regions with their resources and industrial enterprises. This is what the Union State will be able to digest and integrate. At the current stage, Russia will hardly have enough resources for Pravoberezhnaya with its most disloyal population. Perhaps it is worth thinking about some special demilitarized status for these regions and joint administration with Poland, Romania and Hungary.

Sub-option - inclusion in the sphere of Russian influence of all historical Little Russia, including along the Right Bank. Then the scenario with an autonomous Western Ukraine and its European neighbors becomes the most optimal. Novorossiya and Malorossiya can form a new federation, which could enter the Union State with Russia and Belarus.

These scenarios are far from ideal, there are none for a long time, but they are quite realizable and carry a lot of opportunities. However, their implementation at this stage automatically means what in the West will be called a "war of conquest." Can this be somehow avoided?

First of all, the situation in the country must be destabilized. For example, mass protests that turned into riots, as was the case at the beginning of the year in Kazakhstan. The reason can be a lot: rising food prices, higher tariffs, anti-war protests, etc.

If the actions are truly large-scale, capturing the entire South-East, and not only, and Kiev’s reaction to them turns out to be inadequate, Moscow may withdraw recognition of the Ukrainian authorities and, on the contrary, recognize the DPR and LPR, returning former Prime Minister Azarov there to create a Ukrainian government in exile. It is it that will have to become the coordinator of all subsequent political events in Nezalezhnaya. It would be highly desirable to promote the Armed Forces of Ukraine and the civilian population in advance, clearly explaining what awaits them in the event of a turn towards the Union State (See above).

In the event that Ukrainian nationalists and security forces try to pour blood on the protests, then the Russian military will have the right to protect their compatriots by carrying out a humanitarian intervention with the transfer of control of the liberated territories to the Ukrainian government (no longer in exile), the Donbas militia and the people's militia being formed.
Reporterin Yandex News
Reporterin Yandex Zen
71 comment
Information
Dear reader, to leave comments on the publication, you must sign in.