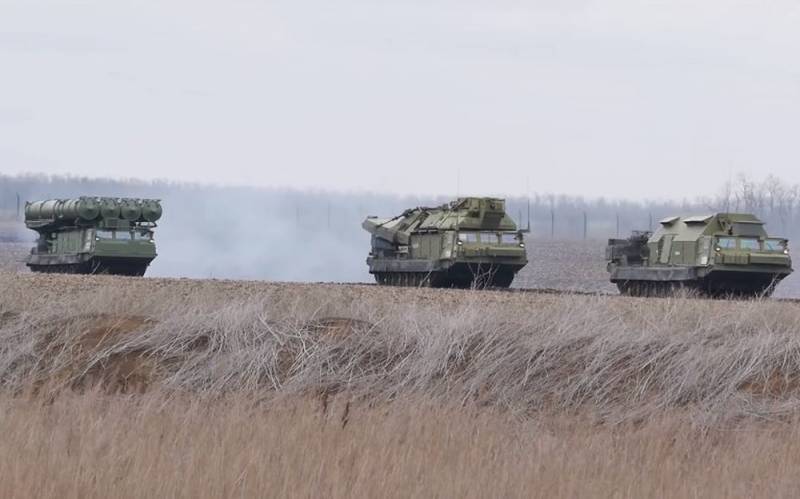 A video has appeared on the Web showing Russian S-300V air defense systems (“Voyskovaya” or “Antey-300V”) in the border area with Ukraine. The footage was taken at night, but the mentioned technique clearly visible.


An eyewitness who shared the video on social networks claims that the recording was made in the Belgorod region of Russia. It should be noted that this region borders on the Sumy, Kharkiv and Luhansk regions of Ukraine, and there has recently been observed deployment the most powerful self-propelled guns 2S7M "Pion-M" or "Malka" caliber 203 mm.


The S-300V air defense system is an air defense / missile defense system of the front-line link of the Ground Forces. These complexes are designed to work in isolation from other air defense systems, providing all-round cover for military groups and the defense of important objects from attacks by all types of aircraft, cruise missiles, other aerodynamic air attack weapons, aeroballistic and tactical ballistic missiles.

At the same time, the West continues to whip up hysteria about the "inevitable invasion of Russians on Ukrainian soil." In this case, in addition to the usual media, “non-governmental” organizations and specific pages (accounts) in social networks are especially zealous. They actively intimidate citizens of Ukraine and residents of Western countries with a “Russian invasion”.

TRAVEL ADVISORY: # Ukraine
In light of multiple countries ordering their citizens to evacuate Ukraine immediately, and the announcement tonight that US intel believes Russia will invade in the coming week, we are now moving to our highest alert level: Code Black, for Ukraine. pic.twitter.com/UrgB5i4CUP

Note that in Russia they no longer hide their relations to the Western media and intelligence agencies, openly calling them fake-news.
Ctrl Enter
Noticed oshЫbku Highlight text and press. Ctrl + Enter
Reporterin Yandex News
Reporterin Yandex Zen
17 comments
Information
Dear reader, to leave comments on the publication, you must sign in.