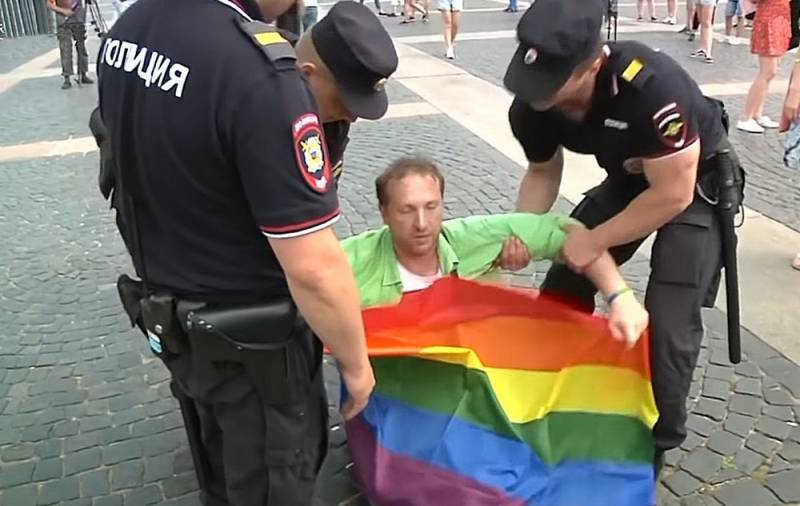 Recently, the confrontation between our country and the "collective West" has begun to turn before our eyes from a series of bright demarches into a process that exhausts the nerves and soul, promising to be quite long. In addition, let's be frank, its results are completely uncertain today. Contrary to the hopes of individual optimists, the "cavalry raid" on Washington, London and Brussels was not successful. Ahead is an extended period of rather tough “turbulence”, and how it will all turn out, one can only estimate. In this regard, no, no, and voices are heard: “Well, why do we need all this? Is it really impossible to somehow agree amicably, to yield in something, and, in the end, to get along with this very West, somehow adjusting to it?


Firstly, “somehow” and “a little bit” here, sorry, will not work. Russia has crossed a certain line and now it has only two ways - either to the end, to the fulfillment of its requirements (whatever price it has to pay), or ... The second option, as you might guess, is complete and unconditional surrender, even if it is will not be initially framed in such a categorical and absolute form. Sooner or later, our country will have to fully accept all the “principles”, “values” and “narratives” imposed on it, strictly following the course prescribed “from above”. And given the full awareness of our "sworn friends" of their mistakes committed in the 90s of the last century, this will happen sooner rather than later. Today, shivering in fear of new sanctions, the ruble exchange rate fluctuations caused by them, or other similar problems, many simply do not think about what kind of exchange rate it will be. And it would be worth it.

This article will not talk about the truly unprecedented robbery that awaits Russia if it begins to lose ground in the current fight. Although, in the light of the energy crisis that has now unfolded in the world (which, as experts predict, has every chance of lasting for years), there are plenty of applicants for the natural wealth of our Motherland. However, as already mentioned, we will not talk about this, but about things that are not as material as oil and gas reserves, but, perhaps, even more global. Sometimes some of our compatriots, coming across in the media on reflections that the "collective West" from a certain point in its development "turned the wrong way" and is now rushing at full speed towards some completely new reality, which is utterly similar to the most "black » dystopian science fiction writers, considers all this an exaggeration. "Anti-Western propaganda", "intensification" and "exaggeration". Alas, this is by no means the case.

In order to prove this statement, let me introduce you to some of the provisions of Resolution 15425 adopted by the Parliamentary Assembly of the Council of Europe (PACE). This document was approved (obviously as an evil mockery) exactly on Catholic Christmas - December 25, 2021. Its title is just as false and hypocritical as the vast majority of PACE's "creations": "On the fight against the growing hatred of LGBT people in Europe." Listening to this, one can really believe that the unfortunate "blue", "pink" and the devil knows what else there are mercilessly persecuted and exterminated in the Old World. At the stake, as in the days of the Holy Inquisition, they burn and create similar horrors.

But you and I know that nothing of the kind happens at all. Whatever the day, then news a news feed about all the new "parades", "prides", "coming outs" and other similar obscenities. All kinds of "non-traditional" now do not languish in gloomy prisons and do not stay in deep underground, but very often sit in parliaments, hold positions in governments and pass laws. It is clear what kind. So why the hell do they still?! According to figures from PACE, the "rainbow" ideology, of course, is advancing in Europe by leaps and bounds, but with all this, for some reason, it "meets fierce opposition" in some places, including "at the state level." About the state, let's clarify, regarding Russia, Turkey, Poland and Hungary.

Let's take a closer look at the latter. There "non-traditional" downright terribly spread rot. Their "marriages" are given the official status of "civil unions". Unnatural connections are not prosecuted by law in any way, and it is allowed to enter into them from the age of 14! Moreover, discrimination based on “orientation” and other gender principles is strictly prohibited in all areas. And what's wrong? The wicked Budapest decided to ban the propaganda of perversions and gender reassignment for minors! Moreover, this cannot be done both in the process of school “sex education”, from which all kinds of “rainbow” NGOs were excommunicated, and through the media and other advertising media. Hungarian law protects the sex of a child at birth and protects him from the imposition of flashy LGBT propaganda. And this, from the point of view of PACE, is a grave, unforgivable crime against "advanced ideas and European values", for which the "wrong" leadership of the country should be punished with all severity. By the way, exactly the same accusations are being leveled against Russia, though with a bunch of other "in the appendage".

It should be clearly understood that today the war for "LGBT values", even if they are thrice wrong, is not at all at the level of the abolition of some individual prohibitions, norms or against preventing the "self-expression" of a particular bunch of perverts. No, the "rainbow" evil spirits go on a global offensive on all fronts. And then it's either us or them. Let me quote verbatim paragraph 18 of the Resolution we are considering:

A paradigm shift in social and cultural understanding of gender equality, mischievous masculinity, and the rights and freedoms of LGBTI people is still needed in many societies to achieve true equality for LGBTI people.
"Harmful masculinity" - how do you like it? However, femininity, motherhood and similar "survivals" these creatures intend to throw out "to the dustbin of history" in the same way as the normal orientation of males. "Shift in public consciousness" - that's what they want! Acceptance by humanity of a new model of the world, in which there will be no men, no women, no mothers, no fathers, no sons, no daughters - only asexual (or all-sex?) biomass. Do you want such a future? And it's coming. Its adherents are by no means prophets and martyrs - rather, they act in the best traditions of totalitarian sects and extremist movements. "Who does not agree - to the nail!" And these are not empty words. In paragraph 14.2 of the Resolution, its authors demand that “motives related to sexual and gender orientation, identity and self-expression” become a serious aggravating motive for considering any, even the most ordinary ordinary crimes. The policeman will catch the thief, and he: “Uncle, don’t touch me, I’m“ blue ”! And he will let go as a pretty one, because it will be more expensive to get involved. And then the killer will be released in the same way ...

Perhaps the most brilliant example of “rainbow justice” today can be considered a lawsuit initiated after a Finnish lady posted on her Twitter post with a quote from the letter of the Apostle Paul “To the Romans”, which sharply condemned perverts. The most piquant thing is that the lady is Pärvi Räsänen, the former head of the country's interior ministry. She cited a literal quotation from Scripture on social networks, in the course of a discussion on a purely church topic. It would seem - exclusively private sphere. But no - she was quickly “sewn on” no less than “discrimination and humiliation”, the police that once obeyed her opened a case, and now Ryasyanen is waiting for a trial. It will be fun if they really put them behind bars. From this to the bonfires from the Bibles (and from the Koran too - he does not approve of the "rainbow" abomination at all) in the main squares of Europe is no longer a step, but half a step. Moreover, the authors of the Resolution directly declare:

Religious leaders are perhaps the main instigators of hatred against LGBT people and their detractors.
But the leaders only broadcast to the public the tenets of the faith they profess!

We are not talking about those who deviate from the completely unambiguous things set forth in Scripture in this matter - these are clergymen with reduced social responsibility. True believers and, even more so, priests are unshakable here. It is with them that PACE demands to fight, and in the most merciless and uncompromising way - so that "no hatred is sown." Fascism, you know, it's not necessarily brown. He is now multicolored. And he comes.

In its paragraph 12.3. The PACE resolution requires:

All states that have laws against LGBT propaganda should repeal them immediately, ensuring full access to objective information about any form of gender orientation, identity and self-expression for all persons without exception. And, first of all, for minors.
Everything vile is for children! More perversions for them - good and different! This is not funny, gentlemen. This is scary. Clause 14.5. all the same Resolution requires organizing special training for police officers, prosecutors and judges, so that in any situation they have no alternative to be on the “LGBT side”. “Rainbow families” (this vile term is not my invention, but, again, a direct quote from the document), should enjoy special care and support from the state. It, according to PACE, is obliged to protect and protect not the disabled, veterans, large families, but all sorts of perverts, making every effort to ensure that their ranks grow, expand and multiply with each new day.

However, the matter is not limited to this. All "progressive countries" without exception must turn the "promotion of LGBT values" and perversion in all its forms into a state ideology. The resolution prescribes for this “the creation of national strategies, the development of appropriate action plans”, and also requires that “the interests of the LGBT community be at the forefront in all key legislative, political and other measures." Does this sound like "protection from hatred and oppression" in any way? In my opinion, no. Rather, we have before us a step-by-step plan to establish a global and total "rainbow" dictatorship - cruel and uncompromising. Alas, in the West it is already being implemented at an accelerated pace. Russia definitely does not need such a “future”. Demanding today to leave our country alone and let it choose its own path, its own values ​​and priorities, we are fighting back, among other things, from these “rosy” prospects.
Ctrl Enter
Noticed oshЫbku Highlight text and press. Ctrl + Enter
Reporterin Yandex News
Reporterin Yandex Zen
71 comment
Information
Dear reader, to leave comments on the publication, you must sign in.