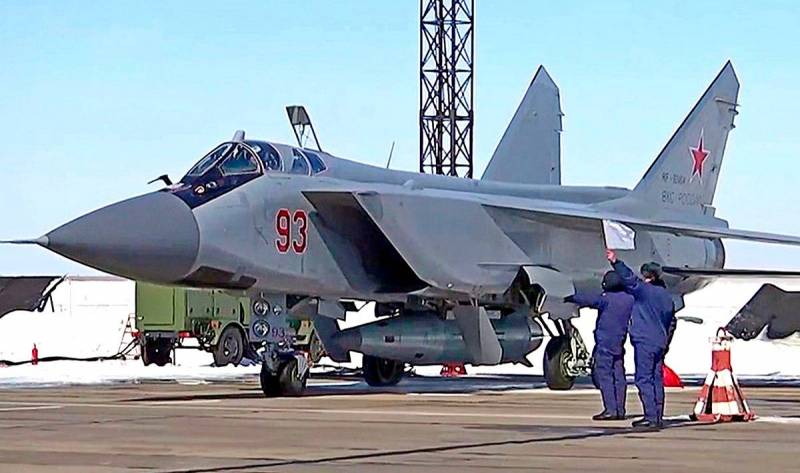 One of the main sensations of recent days has been the transfer to the Kaliningrad region of two MiG-31K fighters equipped with Kinzhal hypersonic cruise missiles. The plane defiantly passed at a low altitude over the railway, allowing everyone to fix the “Putin rockets” on the suspension. This event immediately caused a real stir in the press and the blogosphere, Russian and foreign. What did the Ministry of Defense of the Russian Federation really want to say with this gesture?


According to Russian media, a week ago, two Mig-31K fighters, converted into carriers of the Kinzhal missiles, flew to the Chernyakhovsk airfield in the Kaliningrad region, accompanied by fighter aircraft. Considering that the range of an air-launched hypersonic missile is at least 2000 kilometers, everyone immediately began to draw a radius from the Russian exclave with a compass, and it turned out that the “Dagger” calmly finishes off to any European capital. What gives it a special piquancy is the fact that a rocket flying at a speed of 10 times faster than the speed of sound is almost impossible to shoot down. In other words, the target on which it is released will be hit with a guarantee close to 100%. If we remember that its warhead can be nuclear, then NATO becomes completely unhappy.

However, Western propaganda also does not eat its bread in vain. In Eastern Europe, some expert assessments have already appeared, according to which the flying "Dagger" may well be shot down by American sea and land-based anti-missile systems. It is also argued that it would be more effective to shoot down not a missile, but the carrier of the Kinzhal itself, the MiG-31K fighter, which is no longer suitable for air combat, and even easier - to preventively destroy these aircraft right on the ground, fortunately, they are in Russian there are only two exclaves.

I would like to comment on these statements and at the same time to suggest what is the real purpose of the transfer of carriers of "Daggers" to the Kaliningrad region.

At first, about the fact that bringing down the "Dagger" will be just a task, this, of course, Western experts got a little excited. The Russian missile is in fact not a cruise missile, but an aeroballistic one. The supersonic MiG-31K, converted from a long-range high-altitude fighter-interceptor, essentially plays the role of the first stage outside the dense layers of the atmosphere, helping to accelerate the missile to a speed of over Mach 10. At the same time, the "Dagger" is also actively maneuvering. Not a single existing missile defense system has yet learned to intercept such air targets. That is, the “Dagger” will definitely hit the target.

Secondly, to shoot down the carrier aircraft of the "Dagger" before its launch, or to completely preventively destroy the military base where the MiG-31K fighters are deployed, the idea, of course, is quite rational, albeit unpleasant. But it will be problematic to implement it in the NATO bloc.

The fact is that the Kaliningrad region has the most powerful layered air defense / missile defense system in the Russian Federation. And no wonder, with such and such difficult neighbors from the North Atlantic Alliance. A preventive strike on Russian air bases in the spirit of June 22, 1941 will definitely not work. And if the MiG-31K performs a combat mission, they will undoubtedly be accompanied by Su-35S fighters, which will cover the helpless in air combat carriers of the "Daggers" from attacks by NATO aircraft.

So, we have dealt with the fact that "Putin's missiles" are already in the Kaliningrad region, from where they may well deliver irresistible strikes on any target in Europe. But for what? And what can only two MiG-31s ​​do, each of which carries only one hypersonic missile on a suspension? What can two point "dagger strikes" really change?

In fact, even two missiles can do something, the main thing is to choose the right targets for them. We must be aware that for the United States, European allies in the NATO bloc are just “expendable material” in the event of a war with Russia. The “hegemon” itself is located far beyond the ocean, and a war in the Old World, with the use of tactical or even strategic nuclear weapons, will suit him perfectly. But it will not suit us in any way, nor the completely healthy forces in Europe, who do not need all this for nothing. So what can two "Daggers" change then?

The extraordinary courage of some of the US Eastern European allies is largely due to the dangerous myth that in the event of a war with Russia, the American missile defense system will cover them, and soon the brave soldiers themselves under the Stars and Stripes will come to the rescue. Anti-missile defense in the Old World consists of only a few positional areas: these are the ground-based Aegis Ashore complexes in the Polish Radzikovo and Romanian Deveselu, the command post of the system in Germany, located at the American airbase in Ramstein, a large US radar base in Turkey, as well as a group of 4 US Navy ships equipped with a sea-based Aegis system off the coast of Spain.

Two hypersonic "Daggers" fired from the territory of the Kaliningrad region can choose to destroy two targets with a guarantee. For example, it can be both Aegis Ashore complexes in Eastern Europe. Or, say, one Aegis Ashore complex and an anti-missile system command post in Germany. Left in the event of a brewing armed conflict without the "umbrella" of the American missile defense at once, many European allies of the United States can send a "hegemon" in the woods and leave him to fight with Russia himself.

In other words, "dagger strikes" can break the unity within the NATO bloc and lead a number of European countries out of the war.
Reporterin Yandex News
Reporterin Yandex Zen
93 comments
Information
Dear reader, to leave comments on the publication, you must sign in.