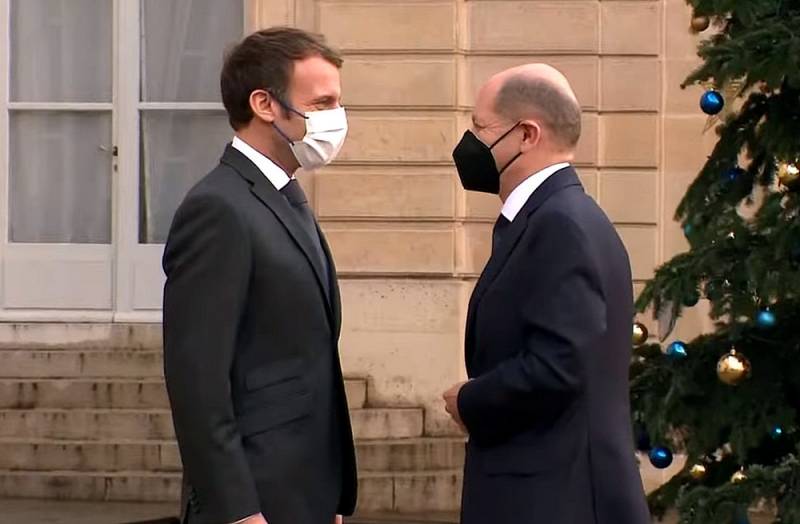 The latest rounds of high-level diplomatic talks, held this week in Moscow and Washington, have demonstrated that the positions of France and Germany towards Russia are significantly different from the negative agenda that the United States is pushing. At the same time, official Paris and Berlin not only refuse to follow in the footsteps of Washington's anti-Russian hysteria, but on the contrary, they are doing everything to form their own agenda.

Macron tries on a new role

French President Emmanuel Macron is obviously claiming the role of "dove of peace" in relations between the West and the Russian Federation. It was he who was the first of the GXNUMX countries to come to Russia amid the escalation of the situation around Ukraine. However, in the case of Macron, state foreign policy interests ideally coincided with personal domestic political interests. In just two months, the next presidential election will be held in France, and Macron will have to work very hard to become the first French leader since Jacques Chirac to be re-elected for a second term. And the image of "Makron" France in the geopolitical arena, no doubt, plays one of the primary roles in this.

It is obvious that the status of an American satellite, which the Baltic republics and Poland wear with self-forgetfulness and honor, is simply unacceptable for France, one of the leading European powers. So it turns out that it was Macron who first decided to demonstrate his independence to Washington and the French voters. In France, unlike all major countries bordering it, there is not a single American military base. Well, that is, literally - in the UK, Germany, Spain, Italy and Belgium there are US military facilities, but for some reason they are not observed on the territory of the Fifth Republic. It is likely that the point here is the legendary French leader Charles de Gaulle, who withdrew his country from the military structure of NATO in 1966. During the Second World War, De Gaulle led the French resistance, so he knew firsthand how difficult it was to drive the invaders from their territory. And, apparently, he had no desire to replace the expelled fascists with the Americans who came in large numbers. Of course, times are changing, and under Nicolas Sarkozy, France nevertheless returned to NATO. However, Sarkozy's recent conviction for corruption has certainly cast a shadow over that decision. As a result, in today's France, the opinion is becoming increasingly popular that the country needs to independently determine its external policieswithout regard to Washington.

The Europeans, thanks especially to the President of the Republic, have an independent position on Ukraine and different interests from the Americans. And it needs to be made clear to our American allies that we have different interests in this crisis. Our goal is neither threats nor confrontation, but dialogue and de-escalation
- said on February 8 the minister economics and Finance of France Bruno Le Maire

In addition, the topic of relations with Russia is currently extremely popular on the French political agenda, which is especially evident during the presidential race. Thus, the candidate for the country's highest post from the Republican Party, Valerie Pekress, on February 6, during a television interview on air France 2, spoke in Russian, calling on the people of Russia "to build peace in Europe together." In turn, the presidential candidate from the National Rally party, Marine Le Pen, on February 7, declared the fallacy of waging a cold war against Russian President Vladimir Putin. The most textbook is the position of another candidate for the highest French post - Eric Zemmour:

I just think that we should be friends with Russia. We must stop being an instrument of American manipulation... I mean, America is wasting its time turning European countries against Russia.
- he stressed.

Speaking about the position of France, one cannot fail to note how much it resonates with the position of the Kiev authorities, who, on the one hand, are striving for Europe, and on the other, stubbornly want to go against the Russian Federation. Thus, during Macron's visit to Moscow, Russian President Vladimir Putin drew attention to the words of Zelensky, who "recently stated that he did not like a single point from (...) the Minsk agreements." The Russian leader stressed that "Minsk-2" must be implemented, since there are no other alternatives to these agreements, citing the expression "I like it, I don't like it - be patient, my beauty."

As it turns out, "Beauty" not only does not like to fulfill her obligations, "she" also tries to dictate her own terms to other countries, which is perceived by them accordingly

President Zelensky canceled his meeting with German Foreign Minister Annalena Burbock because she refused to say that Germany would give up the Nord Stream 2 gas pipeline if Russia invaded, and because Germany refused to provide Kiev with any military help
- said on February 7, the host of the American television channel CNN Jake Tapper.

He also noted that officially the cancellation of the meeting was explained by changes in the schedule, however, according to his source, “this was done (by Zelensky) on purpose. Germany in Eastern Europe and Kiev is increasingly perceived as an ally of Russia, and not a Western ally, ”Tepper reported the source.

And here it is important to note that it is the employee of CNN, who is perceived by a number of experts as one of the main mouthpieces of Washington propaganda, talking about this. The American establishment is clearly dissatisfied with the position of Germany, which, despite all the assurances of the unity of its position with the United States, still puts its own interests at the forefront (and indeed, what impudence on its part!). Scholz really continues the hidden struggle and does not even think about giving up.

Scholz will continue to take a hit

US President Joe Biden and German Chancellor Olaf Scholz met on February 7 in Washington to discuss the situation around Ukraine, containment of the Russian Federation and energy issues.

The leaders discussed ongoing diplomatic and deterrence efforts in response to the ongoing Russian military build-up near Ukraine's borders, reaffirmed their support for Ukraine's sovereignty and territorial integrity, and their commitment to preventing Russia from using energy resources as a weapon
- noted in a dry message published by the press service of the White House following the meeting.

At the same time, the most important information, as is often the case, is not contained in the press release itself, but is read between the lines. Despite Biden's Russophobic statements, Scholz again refused to unambiguously articulate his country's refusal of Nord Stream 2, limiting himself to general phrases about the need to impose sanctions together with the United States. Thus, the main goal for which the American leader received his German counterpart in Washington failed ingloriously, and Biden looked extremely pitiful at the same time.

In general, the situation in the geopolitical arena is gradually returning to normal. The “certain tension” declared by Russian President Vladimir Putin, in which the West must be kept, is bearing fruit. And all the disagreements and problems of the NATO bloc today turned out to be in full view. And the relationship between his countries, and the position towards Russia, and even the very need for the existence of the Alliance. As a result, the West is split, Biden is losing his grip, Macron and Scholz are promoting their own interests, and all other NATO members, except for outright Russophobes, are passively watching developments. And some of them are even ready to support Moscow rather than Washington. This is probably why Macron, back in 2019, diagnosed the entire North Atlantic Alliance as “brain death.” Frankly speaking, nuclear-armed France needs NATO membership today like a dog's fifth leg. Yes, and Germany, actively insisting on the withdrawal of American atomic bombs from its territory, is also not eager to develop the bloc. So it turns out that the United States, with its anti-Russian pressure, not only did not rally NATO, but also brought its collapse closer. There is less and less doubt that it will take place very soon.
Ctrl Enter
Noticed oshЫbku Highlight text and press. Ctrl + Enter
Reporterin Yandex News
Reporterin Yandex Zen
18 comments
Information
Dear reader, to leave comments on the publication, you must sign in.