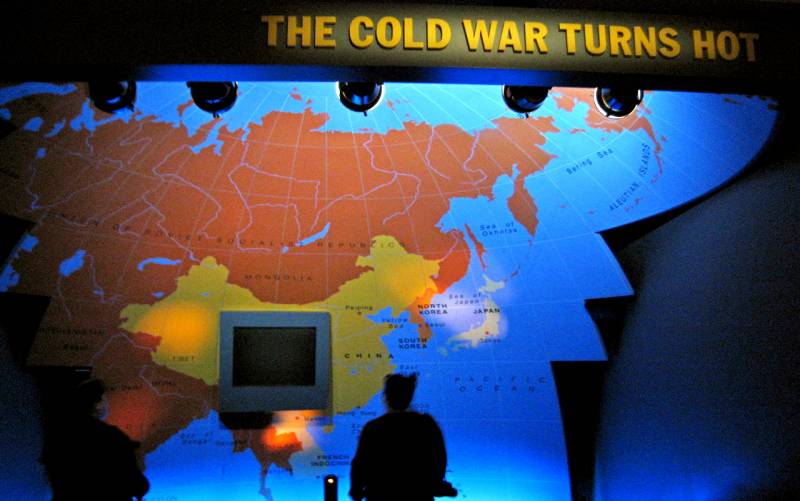 China and Russia have made an appeal to all states on the topic of international relations, the essence of which is that it is necessary to resist hegemonism. For the first time, the US and its European allies are named as a minority:

Some forces, representing a minority on the world stage, continue to advocate unilateral approaches to solving international problems and resort to force policy, practice interference in the internal affairs of other states, causing damage to their legitimate rights and interests, provoke contradictions, disagreements and confrontation, hinder the development and progress of mankind, which causes rejection by the international community.
True, the text does not directly say anywhere who the document is aimed at and what its essence is. If you read the statement without knowing the international context, then there are only general words for everything good against everything bad. Although in fact it can be said that this statement completed the alignment of the main forces on the world stage.

After the collapse of the USSR, the Americans felt like winners, the only superpower that has the right to impose its will on the whole world. Europe meekly followed in the wake of the United States, Russia struggled with devastation, China hid, accumulating strength. America's hegemony was undivided. In order to maintain its military-strategic dominance and reap the benefits of world domination, the United States not only deployed about a thousand military bases around the planet, but also began to unleash wars on far-fetched pretexts in order to overthrow objectionable governments and gain free access to the resources of weak countries. The United States has finally become a global empire.

However, the "golden age" of America could not last long. Europe began to kick, Turkey raised its head, Russia increasingly demanded respect, and China moved from the principle of “artfully keeping a low profile” (Deng Xiaoping) to the policy of “using important strategic chances for China” (Xi Jinping). America reacted extremely painfully to the growth of independence and competitiveness of other countries, inspiring color revolutions wherever it could, imposing sanctions, waging trade wars and getting into all regional conflicts. The Hegemon angrily pounded his fist on the table, but no one was impressed anymore.

In these conditions of the gradual loss of hegemony, the US military-political leadership has relied on the fight against China as the most dangerous rival and a country that preaches a socio-political difference from Western democracies.economic model. The United States decided to play the communist threat card for the second time in a row in order to rally the Western countries, this time against China. In the summer of 2020, US Secretary of State Pompeo delivered a pompous speech that essentially declared a new Cold War on China on behalf of the entire West. However, the most influential European allies were in no hurry to support their patron, the unity and cohesion of the pro-American NATO military alliance was under threat. The United States even had to hastily put together an additional military bloc from the Anglo-Saxon countries - AUKUS - against China, to NATO and QUAD.

The general idea of ​​the US anti-Chinese strategy is to encircle and isolate the enemy, and this is impossible without enticing or at least inclining Russia to neutrality. Russia is one of the key areas of attack on China. But instead of giving up old contradictions and looking for approaches to Russia, the US, as usual, overestimated its strength and slid into cowboy tactics of intimidation. They launched a campaign of maximum pressure on Russia in all spheres, from organizing a White Maidan in Belarus and provoking unrest within Russia (the “poisoning” of Navalny) to numerous sanctions and attempts to disrupt major projects (Nord Stream 2, foreign construction projects of Rosatom). The apotheosis of this policy was the military aggravation on the borders of the LDNR.

It is not entirely correct to say that the United States unleashed a cold war against Russia, the cold war still involves the struggle of various social systems and has a clear ideological color. Modern Russia and the United States have economic and political systems that are identical in nature, and both have democratic regimes, and liberal forces are in power. Putin himself always clearly and clearly declares that he is a liberal who sees no prospects for a return to socialism. Therefore, the cold war is going on between the United States and China, in which the communist regime. And Russia, as an independent state, has to reckon with this reality.

In response to the aggressive actions of Washington, the Kremlin, firstly, energetically stopped a number of threats, showing the strength of its influence (assistance to Lukashenka, the settlement of the Nagorno-Karabakh war, the CSTO mission in Kazakhstan), and secondly, it sharply increased pressure on the liberal “fifth column” inside the country (the ban on a number of NGOs, the recognition of Navalniks as extremists, the closure of Memorial) and, thirdly, made it clear that the strategic partnership with China is valued above the favor of the West.

Moreover, the US leadership, realizing the futility of an immediate regime change in Russia, has been in the negotiation process with the Kremlin all this time, apparently offering some options like lifting sanctions for neutrality against China.

The Russian leadership decided to act in accordance with the logic of American policy and, on an equal footing, put forward a proposal to sign an agreement with the US and NATO on security guarantees. The essence of this proposal was that Eastern Europe should leave the sphere of influence of the United States, and NATO would roll back to the "borders" of 1997. Russia did not openly and directly talk about what it offers in return, so the draft agreement looked like an ultimatum to the outside world. However, in general, there were no grounds for ultimatum demands to leave Eastern Europe, so it is reasonable to assume that in the part of the negotiations hidden from the public, some options for the role and place of Russia in the balance of power during the Cold War were still voiced.

The United States, as is known, was not satisfied with Russia's proposal on security guarantees, and negotiations quickly reached a deadlock. The bullet point in this attempt to reach an agreement was the joint statement by Xi Jinping and Putin in Beijing. Russia has made it clear to the whole world and the United States that it is joining the camp of China in the Cold War.

Pros and Cons of a Pro-Chinese Position

In the joint statement of Russia and China, one can formally observe a clear bias towards the Chinese side. Russia supported China on six points:

1) The Russian side welcomes the joint work of China and WHO to identify the source of the new coronavirus infection and supports the joint report prepared by China-WHO on this issue.

2) The Russian side supports the successful hosting by the Chinese side of the Winter Olympic and Paralympic Games in Beijing in 2022.

3) The Russian side reaffirms its adherence to the "one China" principle, confirms that Taiwan is an integral part of China, and opposes the independence of Taiwan in any form.

4) The Russian Side notes the positive significance of the Chinese Side's concept of building a "community with a common destiny for mankind" to strengthen the solidarity of the world community and unite efforts in responding to common challenges.

5) The Russian side will provide full support to the Chinese side as the chairman of the association in 2022, will provide assistance in the fruitful holding of the XIV BRICS summit.

6) The Russian Party confirms its readiness to continue work on the Global Development Initiative put forward by the Chinese Party.
China supported Russia only on two points:

1) The Chinese side treats with understanding and supports the proposals put forward by the Russian Federation on the formation of long-term legally binding security guarantees in Europe.

2) The Chinese Side notes the positive significance of the efforts of the Russian Side to form a fair multipolar system of international relations.
In addition, the text shows that it was prepared by the Chinese, using ideological expressions characteristic of the CCP. Of course, there are no concessions in content, just symbolism.

The question of whether China is striving for world hegemony and, therefore, whether Russia should be afraid of falling under the influence of the Celestial Empire remains debatable in modern literature.

There are three forces in the world that, in terms of their military and economic potential, are capable of global dominance. These are, in fact, the USA, Europe and China. But to be able does not mean to achieve it and does not mean to strive for it. Europe, for example, has no problems with desire, but in order to claim global leadership, it is necessary to get rid of US influence, form its own European military-political bloc and transform the EU. And this is not so easy in the current conditions.

The official position of the CCP on the issue of global leadership, hegemony and domination has not changed since the era of Mao Zedong, who argued that China would never dictate to other countries how to live, and did not intend to participate in military blocs. Xi Jinping expressed his foreign policy doctrine with the whole theory of "the common destiny of mankind", which is actively promoted in China not only at the level of party studies, but also in the mass media. Its brief content can be expressed in three principles: equality, mutually beneficial cooperation and rejection of any hegemony. The Chinese media constantly emphasizes that "unlike Western countries, which often use force through military intervention and supposedly protect foreign interests, China has long adhered to the principle of non-interference in the internal politics of a foreign country and peaceful diplomacy."

In general, China's behavior on the world stage is consistent with the position of its ruling party. Therefore, the “main disadvantage” of friendship with China can still be considered not so dangerous.

The advantage of the pro-Chinese position can, of course, be considered the huge potential for the growth of economic cooperation between our countries in literally all areas, which is able to fully compensate for Western sanctions and threatening financial and other embargoes. However, it is important to understand here that Chinese capital (private and state) will not work at a loss, China provides assistance only to poor countries.

But the most important thing is that having a huge, powerful friend at your side is much better than an enemy, and it is not possible to maintain neutrality in our position and in the conditions of the inevitable aggravation of the Cold War.
Ctrl Enter
Noticed oshЫbku Highlight text and press. Ctrl + Enter
Reporterin Yandex News
Reporterin Yandex Zen
12 comments
Information
Dear reader, to leave comments on the publication, you must sign in.