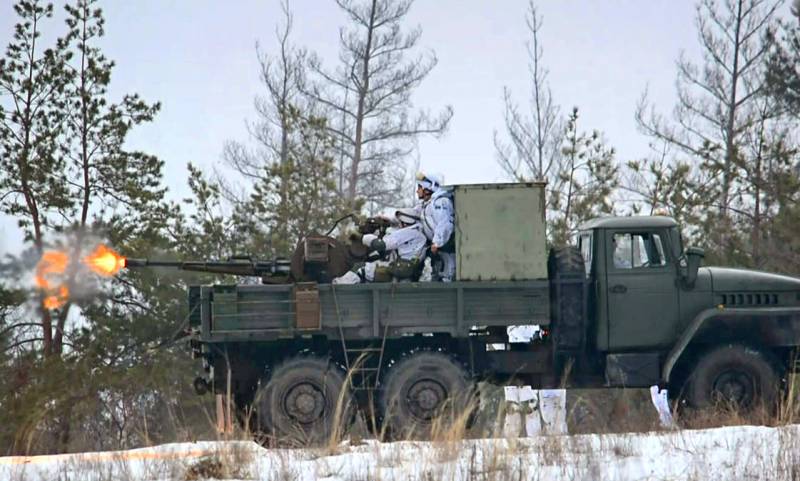 At the end of the topic about a possible clash between the Russian and Ukrainian armies. A lot has already been written in the domestic press about how much the RF Armed Forces are superior to the Armed Forces of Ukraine, which guarantees the inevitable defeat of Kiev in the event of a full-scale war. Very convincing figures are given, impressive tables, beautiful graphs, the experience of past wars is recalled. All this, of course, is great and uplifting. But let's still try to imagine how this hypothetical military campaign, the preparation for which the Kremlin categorically denies, can really go.

In one fell swoop of seven killers

In general, in the event of the start of a full-fledged war, we will destroy strategically important targets with high-precision weapons, then with impunity we will treat with aircraft, iron with cannon artillery and MLRS, burn the survivors with the help of TOS, if necessary, clean up the remaining special forces and occupy the territory with the forces of motorized rifles. Nice. Earnestly. Of course, it’s a pity for the Ukrainian guys, but in a war it’s like in a war, right?

There remains only one last question: do they really not understand this whole alignment, and if they do, then what are they counting on at all?

They understand. Everyone is well aware both in the Armed Forces of Ukraine and in the NATO bloc. Therefore, the Ukrainian army will not fight with Russia in the war for which we are ready. This can be seen quite clearly from what kind of weapons the North Atlantic Alliance began to actively supply to Nezalezhnaya. For some reason, we laugh at the American Stingers and anti-tank Javelins because they are unable to turn the tide of the war in favor of Kiev. And completely in vain, by the way.

Apparently, NATO is preparing the Armed Forces of Ukraine not for a direct, but for a semi-guerrilla and guerrilla war with the RF Armed Forces. And this is very bad.

At one time, Napoleon ran with his “Great Army” behind the Russian one across our vast expanses in order to give a general battle in which Bonaparte would be guaranteed to win, then he would force the Russian Tsar to sign a peace treaty on his own terms and return to Europe to deal with more important affairs. But instead of a general battle, the “NATOs” got Borodino, in which they were able to achieve only limited success, entered the deserted Moscow, and then they themselves took their feet to the Berezina, without having reached their strategic goal.

Unfortunately, there is a very high probability that there will be no general battle, where the generals will ride on white horses. Instead, the Ukrainian army, or rather, what remains of it after pinpoint missile and air strikes by the Russian one, will hide in civilian cities in order to turn them, if not into Stalingrad, then rather into Grozny-2. Part of the military will switch to guerrilla warfare, hitting the extended communications of the RF Armed Forces. And then what to do with all this, you ask?

Imagine a big city that is gradually turning into a fortified area. On the streets there are barricades and anti-tank barriers, in the entrances of houses, fighters with Javelin anti-tank systems are hiding in order to attack assault tanks and other armored vehicles. Snipers are patiently aiming at the windows. Fighters with MANPADS "Stinger" are sitting in ambushes. Spetsnaz uses underground communications and knowledge of the area. So, what is next? Trying to storm the city with the corresponding losses in personnel? Or then demolish it to the ground? For example, Kharkov? Together with the defenders and civilians who did not have time to escape and were forced to become hostages?

And this is all under the cameras of foreign journalists and with the appropriate informational background? I wonder what other sanctions the West will throw at us for this? And how many such “Kharkovs” will there be throughout Ukraine? It remains only to bypass such settlements, occupying strategically important points for control over the territory, and begin to negotiate with the besieged for surrender. But even here there will be problems with specially trained units trained in guerrilla warfare. And it is not a fact that the defenders will all surrender together.

By the way, in such an "inhuman" war, there is a very high chance that the North Atlantic Alliance will intervene on the side of Ukraine. After all, this is not Iraq or Syria, but an almost European country that has signed an appropriate association agreement with the EU.

It is necessary to be aware that intelligent people are working on the other side, who simply will not allow us to use all the available advantages. Therefore, counting "tanks" and planes is, of course, pleasant, but in such a semi-partisan war they will not be of decisive importance.
Ctrl Enter
Noticed oshЫbku Highlight text and press. Ctrl + Enter
Reporterin Yandex News
Reporterin Yandex Zen
45 comments
Information
Dear reader, to leave comments on the publication, you must sign in.