"Ukraine's entry into the Union State": what did Lukashenka mean 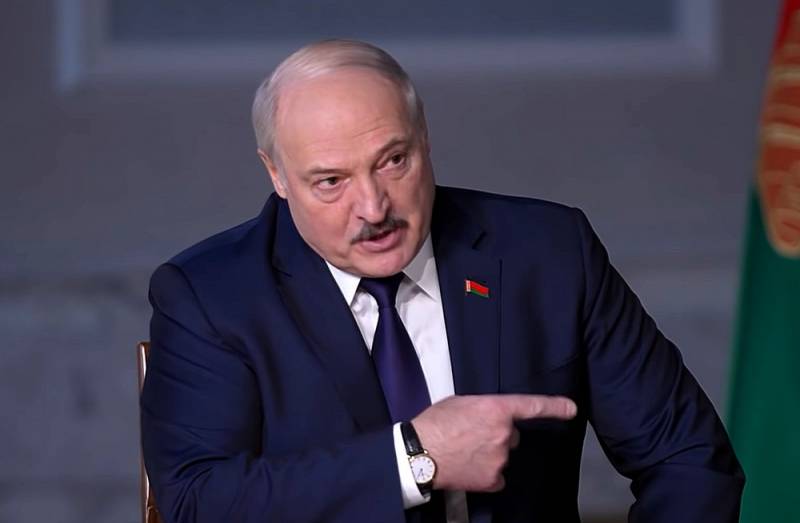 The day before, an interview was published by Belarusian President Lukashenko with the well-known Russian journalist and propagandist Vladimir Solovyov. In the course of it, Alexander Grigoryevich made a number of very important statements, which I would like to discuss now. What did the “mouthpiece of the Kremlin” want to convey to us?

Is the choice made?

It's no secret that the corporate identity of the external policy Minsk was evading any specific obligations to Moscow and constantly maneuvering between Russia and the West, Russia and Ukraine in order to maintain national sovereignty and earn money. But after the unsuccessful attempt of Belomaidan in 2020, the Batka had practically no room for maneuver. The events of the beginning of 2022 in friendly Kazakhstan showed that “leaving peacefully while remaining” will not work either. Only the authorities can guarantee the security and safety of the assets of the near-presidential entourage. Alexander Grigoryevich will be able to stay on top in the suddenly troubled Belarus only with direct and unambiguous support from the Kremlin. He and his family had to make a difficult choice.

So, what has “Old Man” now publicly signed up for?

On the one hand, he assumed strategically important obligations in the event of aggression from Kiev to stop the supply of electricity, fuel and fuels and lubricants to Ukraine. Without diesel fuel, tanks and self-propelled guns will not go, and without electricity there will be interruptions in the energy system of the country, its military industry and socialeconomic the area as a whole. Together, Russia and Belarus can create serious problems for Nezalezhnaya even without firing a shot.

On the other hand, "Old Man" seems to have signed up to shoot if something happens. Minsk promised to take the side of Moscow in the event of Kiev's aggression against the Donbass. It sounds very cool, but let's pay attention to the wording of Alexander Grigorievich:

If they start fighting against us or against Russia, then we will fight to protect ourselves.
Imagine that we are all corrosive lawyers, and ask ourselves the question, since when did the Donbass become part of Russia, that an attack on it requires the deployment of the Belarusian army? Or did we miss something, and Moscow and Minsk jointly recognized the DPR and the LPR and concluded an agreement on military cooperation and mutual assistance with them?

Once again, I don’t want to fantasize and produce entities, but there is still something encouraging in the conversation between “Batka” and the “mouthpiece of the Kremlin”.

An image of the future?

December 28, 2021 on the "Reporter" came out publication with the heading “What the joint future of Russia, Ukraine and Belarus might look like”. In it, we complained that for 8 years of "multi-way combinations" in the Kremlin, they did not bother to formulate an image of a possible joint future of the three Slavic countries and their fraternal peoples.

Instead of offering some kind of constructive agenda and showing Ukrainians a sane alternative to the endless “European association” and hopelessly standing on the threshold of the NATO bloc against the backdrop of growing poverty and an endless civil war, domestic propagandists, journalists and bloggers, savoring, painted how Nezalezhnaya became even more impoverished after the launch bypass gas pipeline "Nord Stream-2" and so on in the same vein. What for?

Believe me, many Ukrainians have long understood that nothing good will come to them from the West, there will be no rye bun for coffee at the Vienna Opera, but nothing comes from Russia, except for mutual hatred. It is clear that an exceptionally many inadequate characters have divorced in Ukraine (and not only there, by the way), but there are also sane people with whom it is necessary to start talking from a high rostrum, and not privately from the pages of popular publications. We need a program for the common future of Ukraine, Russia and Belarus, which can become a new starting point in our trilateral relations. We need a constructive agenda, from which we will try to dance further together.

In this context, the demonstrative communication between the "Father" and the "mouthpiece of the Kremlin" gives some hope for positive changes. So, finally, at the presidential level, the possibility of including Ukraine into the Union State was voiced:

If you say a period of 15 years, I am sure that Ukraine will be there if we do not make mistakes.
Not immediately, which is quite reasonable, but in 15 years, apparently, when passions subside, the process of gradually denazification of the Square will take place. At the same time, the thesis was also voiced about the possibility of joining the Union State of Kazakhstan and a number of other former Soviet Central Asian republics:

You know, Belarus is already there, I think that there was a good lesson for Kazakhstan ... Turkmenistan, Uzbekistan and Tajikistan, I think, due to their economic necessity, will also join.
So far, no specifics, but this is already something similar to a sane integration project with the possible participation of Ukraine in it as an alternative to the “European association” and joining the North Atlantic Alliance. This is a great constructive step forward, which can only be welcomed.

It is obvious that the current pro-Western puppet regime will not agree to this, and this is where the long-awaited recognition of the DPR and LPR with a liberation operation, in which Belarus could participate, could play its role. The option is extreme, but quite working. Now I would like Russian President Putin to take the next step, taking personal responsibility and turning to the Ukrainian people with a proposal to return and join the Slavic union.

If the alternative is war, then an internal split will occur in Ukrainian society and in the Armed Forces of Ukraine, as part of this society, which can be skillfully used for the common good.
Ctrl Enter
Noticed oshЫbku Highlight text and press. Ctrl + Enter
Reporterin Yandex News
Reporterin Yandex Zen
11 comments
Information
Dear reader, to leave comments on the publication, you must sign in.