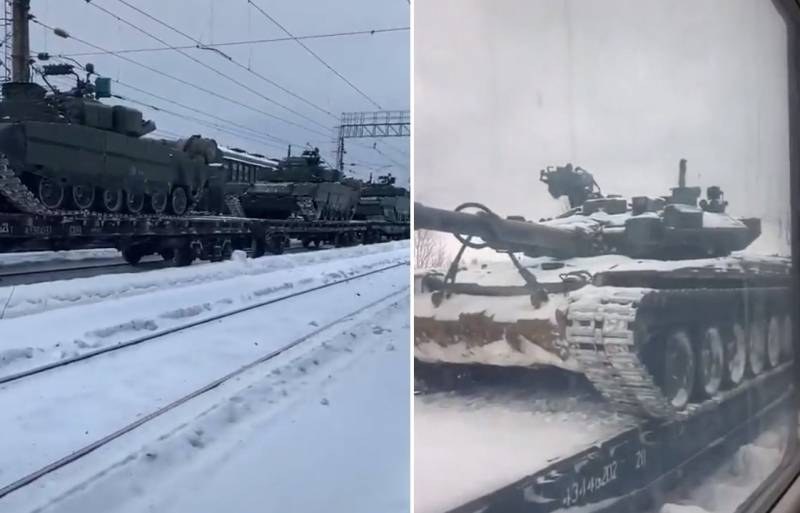 Videos from eyewitnesses have appeared on the Web, confirming the transfer of Russian modern T-90A and T-80BVM tanks, as well as 152-mm 2S3 Akatsia self-propelled howitzers by rail in a westerly direction.


It is noteworthy that the protection elements covering the side projections were removed from the tanks of one of the echelons. This, apparently, was done so that the dimensions did not interfere with transportation, because the caterpillars of the tanks already protrude unnecessarily beyond the platforms.

The T-80BVM is called "flying tanks", which have been in service with the RF Armed Forces for several years, strengthening the country's defense capability. This is a modernized version of the T-80BV tank, which entered the Soviet Army in 1985. As of 2021, the Ground Forces of the Russian Federation had 310 T-80BV units and 140 T-80BVM units (3 thousand T-80B, T-80BV and T-80U units are in storage), as well as the Coastal Forces of the Russian Navy - 50 T-80BV units and 50 T-80BVM units.

It must be recalled that in November 2021, Western media сообщилиthat Russia sent to the eastern borders of Ukraine a battalion of one of the fastest tanks in the world - T-80U (highway speed up to 80 km / h) 4th Guards Tank Kantemirovskaya Order of Lenin, Red Banner Division named after Yu. V. Andropov.
Ctrl Enter
Noticed oshЫbku Highlight text and press. Ctrl + Enter
Reporterin Yandex News
Reporterin Yandex Zen
2 comments
Information
Dear reader, to leave comments on the publication, you must sign in.