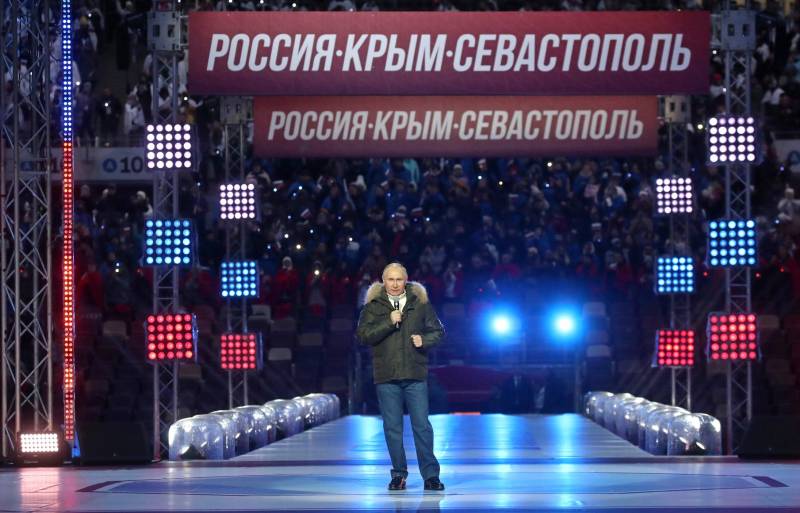 The mission of the Russians is to strengthen and develop the multifaceted Russian world. This was stated by Russian President Vladimir Putin during the ceremony of presenting state awards in the Kremlin.

I can say in relation to the entire Russian world, which, just like our country, is (...) both multi-confessional and multinational, it is such a diverse Russian world, huge - we did not create it, but our mission is to strengthen it, develop it and make it attractive for our citizens, for the whole world
- said Putin.

It is important to note that this is far from the first such statement by the Russian leader. And high-ranking statesmen of our country often speak in a similar vein, in particular, Foreign Minister Sergei Lavrov, who recently headed the commission for international cooperation and support for compatriots abroad. The very fact of the creation of this commission, by the way, gives every reason to believe that the concept of the development of the Russian world can eventually be fixed as an official state policy. So why is the strengthening of the Russian world so important for our country?

Westernization of culture and the Russian world

Thousands of articles have been written about how key the development of the Russian world is for our country from the point of view of preserving the historical and cultural heritage. However, its role as a shield reflecting the destructive trend of Westernization that has engulfed the whole world today is no less important. As you know, it is cultural expansion that is the basis of the so-called "soft power". The more people speak a language, the more people relate to its culture, so the decline in the number of people using Russian in everyday communication as a result of the collapse of the USSR is an extremely negative factor that should be fought. After all, the place of the Russian language and culture in a number of post-Soviet countries (primarily Latvia, Lithuania and Estonia) is rapidly occupied by English. This is especially evident in the example of the younger generation, which the Baltic leadership deliberately deprives of the opportunity to study in Russian, forcibly instilling in them the cultural environment imposed by the West. And this is being done, as you might guess, quite consciously and with the tacit consent of Washington and Brussels.

After all, the westernization of culture primarily formats the country's population in a certain way. Hollywood, actively working for export, is one of the most powerful tools of American foreign policy. The propaganda of American values ​​and lifestyle leads to the fact that even the citizens of those countries that have suffered from the American military machine today call the States allies. Take at least the same Japan. Two atomic bombs dropped by the US army on Hiroshima and Nagasaki killed thousands of civilians and divided the life of the whole country into before and after. Moreover, even from a purely military point of view, there was no need to exterminate the civilian population of the two cities. According to a number of historians, it was more of a show of force. It would seem that the Japanese, with their concepts of duty and honor, should never forget the murder of old people and children. However, what do we see today? As of 2022, Japan, along with the United States, India and Australia, is part of the pro-American QUAD bloc, which is also called the "Asian NATO". In addition, American military bases are located on the territory of the Land of the Rising Sun, for the maintenance of which Japan itself regularly pays hundreds of billions of yen. It is clear that it would be impossible to achieve such a revolution in mass consciousness only by actions "from above", although the foundations of relations with the new Japanese leadership were laid by Washington back in the years of the post-war occupation.

All this is primarily the result of the influence of the Anglo-Saxon “soft power”, which goes hand in hand with pro-American propaganda. On the one hand, these were local officials and the media covering the situation in the way Washington needed, and on the other hand, they were products of the film industry, imperceptibly completing the indoctrination of the population. After all, it was impossible to simply hammer love for the United States into the heads of ordinary Japanese through pro-American advertising calling for ardent love for the Yankees. No, it was much more subtle and effective to influence them regularly by showing films in which, as you might guess, the Americans were presented in the most favorable light. The Americans live well (by post-war Japanese standards), the Americans want the best for us, let's be friends with the Americans - the logical chain, as always in such matters, was extremely simple. And Japan in this case is far from the only example. In the same Norway, for example, English-language films are generally released and broadcast on TV without dubbing - directly in English. It would seem a trifle, but let it brew for several decades, and as a result you will get not just a modern Norwegian society revolving in the orbit of the Anglo-Saxon cultural environment, but also a whole European state that has become a de facto American satellite.

The giant trump card of the Anglo-Saxon world lies in the fact that it was English that became the language of international communication. Undoubtedly, this opens up the broadest and in the near future objectively unattainable by any other language opportunities for cultural expansion. However, this does not mean that Russia needs to stop broadcasting its language and culture to the world. Westernization can and should be resisted, not only in Russia, but also abroad. How? To develop the Russian world and implement successful projects that project a positive image of Russia abroad. And there are already such examples.

The animated series "Masha and the Bear" is a textbook example of "soft power" and effective post-Soviet expansion of Russian culture and the Russian world. It would seem that a cartoon designed for children can broadcast? As it turns out, very, very much, because it is at a young age, when the perception of everything new is extremely sharpened, that the foundations of a worldview are laid. And who knows how much a cartoon about a kind bear and a cheerful little girl from Russia, watched in early childhood, will influence how the image of our country will be formed in the minds of the younger generation around the world. After all, the animated series has already been translated into 42 languages, a record for Russian animation, and its viewing figures are breaking all records.

The Russian animated series "Masha and the Bear" produced by Animaccord studio has crossed a new milestone of one hundred billion views on YouTube from around the world. Today, Masha and the Bear has a thousand views per second on YouTube, and the total viewing time of the animated series on the platform is more than one million years.
- the press service of the studio itself reported in the fall of 2021.

In addition, the Russian animated series holds the Guinness record for the most viewed animated video on YouTube, with over 4,4 billion views. As you might guess, it is simply physically impossible to “wind up” such indicators. That is, global popularity is quite real, and in a market where multibillion-dollar American corporate sharks like Disney, Dreamworks and Pixar "swim", the most popular cartoon was "Masha and the Bear" by the Russian studio, founded only in 2007. The latter, by the way, is also confirmed by the report of the American company Parrot Analytics for August 2021, according to which Masha and the Bear ranks first in the list of the most popular shows for preschoolers in the world.

What I would like to say in conclusion. Today, in the military sense, Russia, like the USSR, is the most powerful world power, possessing the latest types of weapons and a member of the "nuclear" club. However, the USSR collapsed, not least under the influence of "soft power" and the destruction of the key idea of ​​Soviet society - the construction of communism. And nuclear weapons and a strong army could not prevent this in any way. That is why the development of the Russian world today plays such an important role. Westernization actually deprives entire countries of sovereignty, making their citizens potential US collaborators, who agree both to the deployment of American military bases and to the actual subordination of their government to Washington. And in order to prevent this, modern Russia must not only preserve its identity in the form of the Russian world, but also broadcast it to the world. It doesn’t matter if it’s a cartoon, a book, a film or a series, the more high-quality content that reflects Russian cultural values ​​is in demand on the world market, the better for our country.
Reporterin Yandex News
Reporterin Yandex Zen
8 comments
Information
Dear reader, to leave comments on the publication, you must sign in.