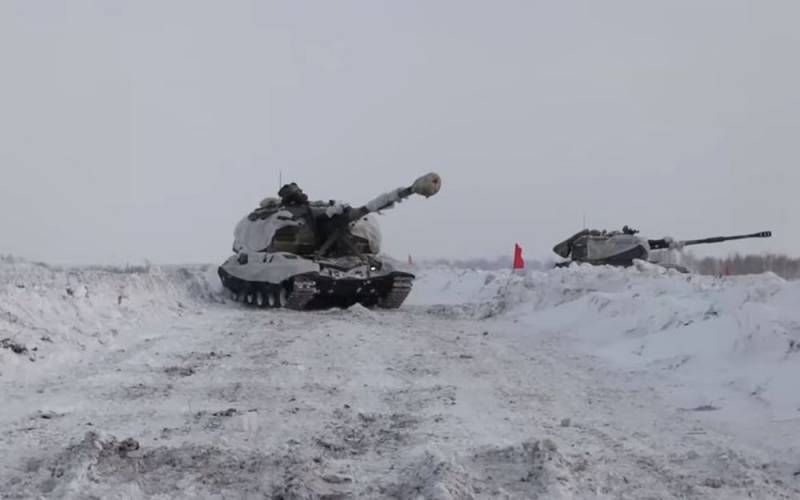 Many imagine Russia's offensive into Ukraine in the form of huge columns of Russian tanks moving through the snowy Ukrainian fields, which will be more terrible than the bloodiest moments of the war in the Donbass. But this is all misperception and fantasy, writes columnist David Ax in the American edition of Forbes.


The author believes that artillery will give a signal. Hundreds of heavy guns and multiple launch rocket systems will speak, dispersed among numerous and practically independent battalion tactical groups. For Russians, artillery is the god of war, and this is well spelled out in the military doctrine of the Russian Federation.

The Russians tested their latest “reconnaissance and fire complex” (UAV and artillery coordination) in the Donbas in 2014-2015 and are now ready to build on the success. Today, there are from 50 to 70 BTGs on the Russian-Ukrainian border, which are ready to immediately enter the territory of Ukraine
- the author specifies.

Each BTG has a little more than 1 people. But they have three batteries of six 152-mm self-propelled howitzers 2S19 "Msta-S" in each, i.e. artillery battalion - 18 self-propelled guns, which corresponds to the level of a brigade in the United States. These self-propelled guns follow in combat formations the tanks and infantry that cover them. Management and fire control, as well as the movement of commanders of the BTG, artillery battalion and batteries on the battlefield is carried out using vehicles 1V13, 1V14, 1V15 and 1V16, made on the basis of the MT-LBu chassis. These machines allow you to maintain stable communication with subordinates, coordinate actions with attached forces and superiors. Together with the BTG, a mobile reconnaissance point with a radar station follows, carrying out reconnaissance and issuing target designation.

The main thing is that BTG does not really need the help of the brigade. Moreover, the BTG, in principle, does not need fire support above the brigade level. The means of fire destruction of the BTG are only a few kilometers from the enemy, and the brigades, divisions, corps and armies are much further away, and they do not own all the operational and rapidly changing situation on the front line.

The incredibly tight interaction of tanks, artillery (cannon and MLRS) and infantry allows the Russians to quickly open fire on enemy forces. This is all they need to defeat the advanced units of the Armed Forces of Ukraine in a matter of seconds.

Today, the cycle [from reconnaissance of a target to its destruction] is literally ten seconds.
- the author quotes the words of the deputy chief of staff of the Ground Forces of the Russian Federation, Major General Vadim Marusin, summing up the material.
Ctrl Enter
Noticed oshЫbku Highlight text and press. Ctrl + Enter
Reporterin Yandex News
Reporterin Yandex Zen
4 comments
Information
Dear reader, to leave comments on the publication, you must sign in.