US time is over: Russia and China will build a new multipolar world 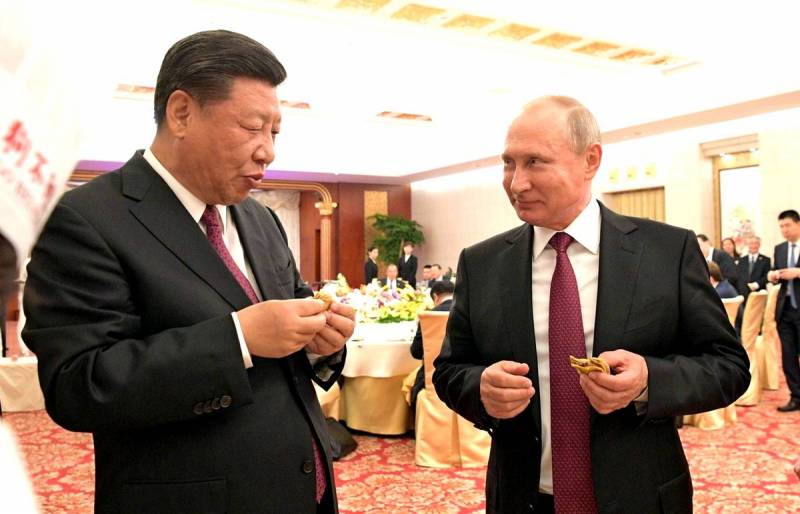 On February 3, Vladimir Putin published an article for the Chinese news agency Xinhua. The title "Russia and China: A Strategic Partnership for the Future" speaks for itself. The publication primarily emphasizes that relations between the Russian Federation and China have reached an unprecedented level and have become a model of relations between the two countries for a number of factors.

And we highly appreciate that the Russian-Chinese relations of comprehensive partnership and strategic interaction, entering a new era, have reached an unprecedented level, have become a model of efficiency, responsibility, and aspiration for the future.
— notes the Russian leader.

Russia and China are poles of stability in the international arena

Close Russian-Chinese cooperation is becoming especially relevant in the context of aggressive US actions to destabilize the geopolitical situation. The desire to maintain a unipolar world at any cost is one of the key factors in Washington's escalation of international tension. Both Moscow and Beijing can and should assume the functions of global poles of stability.

Our countries play an important stabilizing role in the modern, far from simple international situation, contribute to the processes of democratization of the system of interstate relations in order to make this system more fair and inclusive
Vladimir Putin emphasizes.

Thus, today it is Russia and China that are trying on the role of locomotives for the formation of a new world order. The period of Anglo-Saxon dominance, caused by the results of the Cold War, is objectively coming to an end, and the unipolar world is being replaced by multipolarity, which is also noted by the Chinese side.

By the way, at the end of December 2021, he noted that relations between Russia and China "are in the best period in history and at an unprecedented high level, and the pace of their development" created a miracle "in the history of relations between major countries."

And it's not just about words. While the US and the EU have been struggling in recent weeks to destabilize the situation in the Ukrainian direction, denying Russia the very possibility of having spheres of influence, China takes a fundamentally different position. For example, at the end of January, the United States requested the convening of a meeting of the Security Council on the situation around Ukraine. United States Ambassador to the UN Linda Thomas-Greenfield then stressed that the American side plans to bring up for discussion the alleged "threatening behavior" of Moscow towards Ukraine and the "build-up" of the Russian military presence on the border. China's reaction was not long in coming. Official Beijing then publicly expressed doubts about the position of the United States and, together with Russia, voted against convening a meeting of the Security Council.

Russia has repeatedly stated that it does not plan to start any military operations, and Ukraine noted that it does not need a war either. Under such conditions, what is the basis for the concern of countries and why do they insist that there will be a war?
Zhang Jun, Permanent Representative of the People's Republic of China to the UN, said.

The situation surrounding the convening of the UN Security Council clearly demonstrates that Russia and China not only understand each other at the level of bilateral cooperation, but are also ready to broadcast their position at the international level.

According to the IMF, the Chinese economy became the largest in the world when recalculating GDP at purchasing power parity in 2014, displacing the United States from the first line. Eight years later, China not only has not lost this advantage, but, on the contrary, has increased the lead over the Americans to $3,3 trillion. So today, in terms of GDP (PPP), the Chinese economy is already 16% larger than the US economy, and given that it has the highest growth rate in the world, it is logical that the gap will only continue to widen over time. Thus, the time of the United States as an engine for the development of the world economy is gone and is unlikely to ever return, which once again actualizes the building of economic relations between Moscow and Beijing.

A number of experts note with inexplicable regularity that it will be difficult to build Russian-Chinese relations on the principles of parity, given the differences in the economic situation of the two countries. However, today their future looks brighter than ever. Trade turnover between Russia and China in 2021 increased by 35,8%, reaching a historical record level of $146,88 billion. At the same time, the export of goods and services from Russia to China amounted to 79,32 billion dollars, which means an increase of 37,5%. Moreover, it is extremely important to emphasize that, unlike the vast majority of the developed countries of the world (including the USA, Great Britain, France and Germany), Russia maintains a surplus of trade relations with China, i.е. Russia sells more to China than buys from it. Thus, the positive balance of Russia in trade with China in 2021 amounted to $11,76 billion, demonstrating a reactive growth of almost 80 percent. At the same time, it cannot be said that such figures are due to recovery growth after the pandemic 2020, because then the trade turnover between the two countries decreased by less than 3 percent.

Separately, it is worth noting that behind the encouraging lines of trade statistics between the Russian Federation and China, fruitful cooperation between the two countries in the energy sector is also hidden. Vladimir Putin's article separately emphasizes the "mutually beneficial energy alliance" that is developing in bilateral relations, which implies not only the supply of Russian hydrocarbons under long-term contracts, but also the joint implementation of a number of Russian-Chinese projects. This includes the construction of four new power units at Chinese nuclear power plants, which began last year and is being implemented with the participation of Rosatom.

All this significantly strengthens the energy security of China and the Asian region as a whole.
the President emphasized.

Thus, bilateral relations between Russia and China are experiencing an era of unprecedented prosperity. On the one hand, trade is growing, and in both directions. On the other hand, the two countries are gradually building the architecture of a multipolar world based on mutual respect for the interests of each of the parties. At the same time, it is important to note that today Russia and China do not have any economic, political or territorial claims to each other, that is, the only thing that awaits the country in the future is sustainable and stable development, which it will be extremely difficult for the US that is clearly interested in this to violate. One way or another, but the time of Anglo-Saxon domination in the geopolitical arena is beginning to end. And Russia and China will build a new multipolar world, regardless of whether Washington wants it or not.
Ctrl Enter
Noticed oshЫbku Highlight text and press. Ctrl + Enter
Reporterin Yandex News
Reporterin Yandex Zen
45 comments
Information
Dear reader, to leave comments on the publication, you must sign in.