Europe has a new anti-Russian alliance 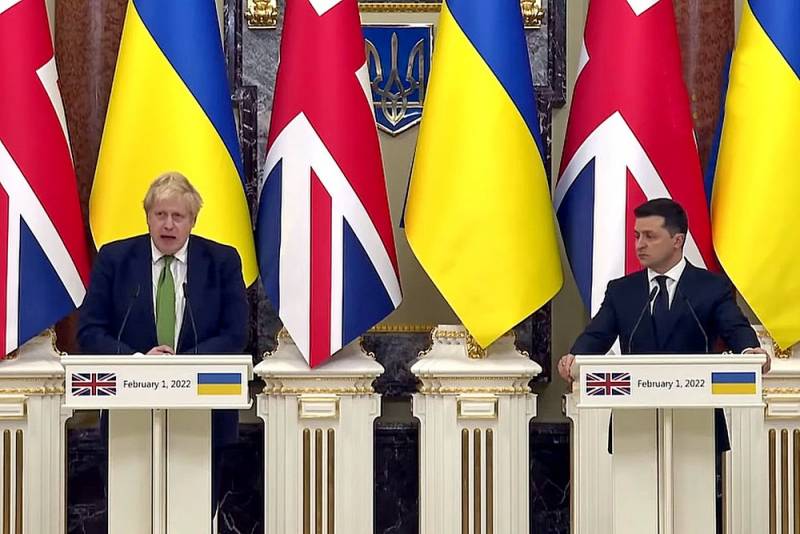 On the political map of the world marked a new geopolitical union. According to Kiev, in addition to Ukraine, it should include Poland and Great Britain. At first glance, the composition of a promising trilateral alliance seems unusual, but on reflection, everything falls into place. So why did London, Kiev and Warsaw need each other?


The day before, British Prime Minister Boris Johnson and his Polish counterpart Mateusz Morawiecki arrived in the Ukrainian capital. Delighted by such demonstrative support from the West on the eve of the “Russian invasion”, President Zelensky hastened to announce the creation of some kind of “new format of political cooperation in Europe” between the Independent, the United Kingdom and the Republic of Poland. Irina Voloshchuk, the so-called Ukrainian Minister for Donbass and Crimea (“on the issues of reintegration of uncontrolled territories”), went furthest in her enthusiastic assessments of the event:

You can understand the Ukrainian leadership. How many years in Kiev they talked about the fact that they are actually at war with Russia, and then suddenly the prospect of making war with her became quite real. And just as unexpectedly, it turned out that no one in the West was going to “fit in” for the Square. The supply of weapons, ammunition, perhaps the help of military advisers, but we will have to fight the Russians ourselves, to the “last Ukrainian”. The United States and the NATO bloc, in general, will not arrange any Third World Nuclear War, which we have been frightened of since 2014, for the sake of Ukraine.

It is a pity that the experience of the war with Georgia in 2008 did not teach Kiev anything. Some disturbing thoughts among the Ukrainian ruling "elites" probably appeared after the dramatic events in Afghanistan, but now it's a bit late. Since nothing directly shines against Russia Square, Kiev has to look in the West for partners with pronounced national interests and high motivation and try to arrange some kind of alliances with them.

Entering into a new tripartite alliance, Warsaw kills several birds with one stone.

At first, against the background of the internal problems of the European Union, the idea of ​​​​an alternative supranational association called "Trimorye" or "Three Seas Initiative" (ITM) is actively gaining popularity. In fact, this is a variation on the theme of "Intermarium" (Polish Międzymorze, lat. Intermarium) by the Polish leader Jozef Pilsudski.

The new iteration assumes the formation of a union of 12 states located between three seas - the Black, Adriatic and Baltic. All its members: Latvia, Lithuania, Bulgaria, Hungary, Poland, Romania, Slovakia, Croatia, Slovenia, Czech Republic and Estonia, with the exception of Austria, are former socialist countries. Despite the fact that Trimorie is not positioned directly as a counterbalance to Western Europe within the EU, it is clear that a new force is consolidating in Eastern Europe.

Secondly, in this geopolitical project, Warsaw plans to play the first violin, which objectively reaches a new level of contradictions with Berlin, Paris and Brussels. This requires strong allies, and the United States is considered an unspoken "roof" for "Trimorye", which needs leverage to put pressure on disgruntled partners from Western Europe. Now it becomes clear that Warsaw is no longer interested in being perceived solely as Washington's most loyal and devoted ally in the EU. An alliance with Great Britain, which is again actively gaining strength and influence on the world stage, will diversify the political risks of Poland in its projects, as opposed to the already “hegemon”.

Thirdly, in alliance with London and Kiev, Warsaw, skillfully playing the "Russian card", will be able to more tightly tie Ukraine to itself. Perhaps, instead of the European Union and NATO, it will be accepted as a candidate for joining the "Trimorye", and Poland will conclude a direct bilateral agreement on military-technical cooperation and mutual assistance with the Independent.

Who knows how things will turn out there? Suddenly, Russian troops will invade someday, and then Lvov will again become Lemberg. From a black sheep, at least a tuft of wool.

Why "Entente" of Great Britain

Like Warsaw, London kills three birds with one stone.

At firstBy supporting Poland and its Trimorya project, the United Kingdom is creating serious long-term problems for its recent allies and long-standing historical adversaries in Western Europe, Germany and France. By leaving the EU, the UK is helping to undermine its foundations, contributing to the formation of a new interstate alliance in Eastern Europe.

SecondlyBy actively supporting Ukraine when the rest of the Western countries defiantly chose to retreat, London intercepts the lever of powerful pressure on Moscow. Statements of readiness to confiscate the assets of Russian oligarchs and energy companies based in the United Kingdom are from the same opera. It is possible that businessmen who swore allegiance to Her Majesty will be allowed to confirm their loyalty by supporting the Russian opposition financially and organizationally.

Thirdly, London is obviously beginning to play an increasingly prominent role in geopolitics. Perhaps this is a consequence of an unspoken agreement with Washington, which focused on the confrontation with China, on the delimitation of spheres of influence. Or maybe it's the British themselves who are quietly "pushing" the Americans in Ukraine and Eastern Europe.

The stars just so happened that the unexpected union of Great Britain, Poland and Ukraine turned out to be beneficial for all three such different countries. But how long will this “cordial consent” last?
Ctrl Enter
Noticed oshЫbku Highlight text and press. Ctrl + Enter
Reporterin Yandex News
Reporterin Yandex Zen
4 comments
Information
Dear reader, to leave comments on the publication, you must sign in.