Lost opportunities. Why is the "Soviet Mistral" better than the UDC of project 23900 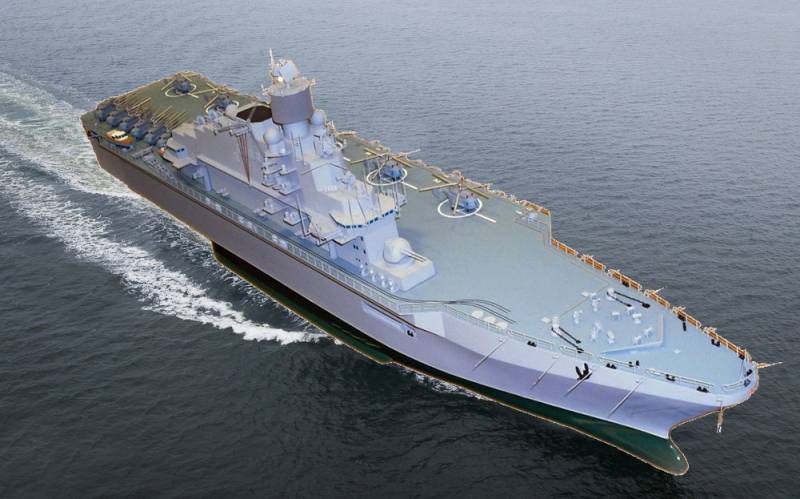 The transition the combined detachment of large landing ships of the Baltic and Northern fleets in the Mediterranean Sea made a lot of noise in Europe. NATO countries staged a real circus with the transfer of troops to the coast and the escort of six Russian large landing ships, as if they could really capture them. What are the real capabilities of the Russian Navy for landing on the sea coast, and what could they be?


To capture some conditional "African" country from the sea, it is desirable to create a strong expeditionary strike group (EUG), capable of striking sea and ground targets of the enemy's antiamphibious defense, as well as landing the actual landing force - marines and armored vehicles. At the same time, the EUG itself must be reliably covered from attacks by aircraft, anti-ship missiles and submarines. Let's "by eye" compare the capabilities of the Russian Navy and the US Marine Corps, with the support of the US Navy, to conduct amphibious assaults.

What's with the Americans

They are great with this. The payroll of the US Navy includes 8 landing helicopter dock ships (Landing Helicopter Dock, LHD), 11 landing transport docks (Landing Platform Dock, LPD), 5 landing helicopter dock ships (Landing Ship Dock, LSD) and 3 landing - assault helicopter carrier (Landing Helicopter Assault, LHA) of the USS America type. The Americans intend to increase the number of the latter from 3 to 11. This means that at a time the United States can transfer over 31 marines and 670 armored vehicles to a foreign coast.

This is a very serious force that allows Washington to speak "through the lips" with almost anyone. It is clear that only the United States can afford to maintain the most powerful navy in the world and the most numerous Marine Corps due to a combination of many factors, including their geographical remoteness from the main theater of operations, aggressive external policies Washington, as well as the exceptional financial capabilities of the "hegemon".

Russia cannot afford all this, claims to the role of a world power require meeting certain criteria, in particular, the ability to project its military force somewhere on the other side of the world. What do we have with hypothetical amphibious assault forces?

To be honest, we are not very good at this. If you look at the combined detachment of the BDK, which so defiantly alarmed the NATO bloc, then 5 out of 6 are old Soviet ships that have almost exhausted their resources. Only one of them, "Ivan Gren" project 11771, is a remake, which was built for a very long time, expensively and with a lot of comments.

Today, our main hope is the "Russian Mistrals", project 23900 universal landing ships laid down and under construction in Kerch. About which ships the Russian Navy, BDK or UDC need, we detail reasoned earlier.

Interestingly, we could have had our own Mistrals a long time ago, and the BDK, the “workhorses” of the fleet, could have been larger. Many opportunities at one time were mediocrely missed due to intrigues, sloppiness and outright sabotage.

When the domestic press wondered if six Russian large landing ships were going to the Caribbean Sea, they usually forgot to mention that they were not structurally adapted for such an ocean crossing, which would have ended it in a dangerous adventure. However, the USSR Navy had three Project 1174 ships, which were quite capable of such a task.

The total displacement of the Rhinos, as these BDKs were called, was 14 tons, which made them ships of the far sea and ocean zone. The cruising range at a speed of 060 knots with a normal fuel supply was 18 miles, and with a maximum fuel supply - 4000 miles. BDKs could transport up to 7500 PT-50 tanks, or 76 armored personnel carriers and infantry fighting vehicles, or up to 80 vehicles, as well as up to 120 marines. Soviet ships carried weapons for self-defense and support of the landing troops: 500-mm gun mount AK-76, four six-barreled 726-mm automatic guns AK-30, launcher (PU) of the Osa-M air defense system, four quadruple launchers for MANPADS and one installation MLRS A-630 Grad-M.

In total, 3 ships of project 1174 were built: Ivan Rogov, Mitrofan Moskalenko and Alexander Nikolaev. Yes, the promising Russian UDC project 23900 is named after two Soviet BDKs. By the way, when France threw us with the Mistrals, it was the Rhinos that were considered as some kind of their ersatz.

Alas, Ivan Rogov was disposed of in 2004, and Mitrofan Moskalenko was scrapped in 2019. There was some hope for the preservation and modernization of "Alexander Nikolaev", but he was also sentenced. Note that ships of this class and displacement are just what you need to deliver military cargo to the Caribbean or somewhere else.

By the way, the "Rhinos" were built on the Kaliningrad "Yantar", which, obviously, is capable of laying and building a ship with a displacement of over 14 tons, the size of a decent cruiser.

Project 11780 universal landing ships in the amount of 2 pieces were never built, which is a pity. They could well become "Soviet Mistrals", giving the Russian Navy the first UDC helicopter carriers without flirting with France.

This project was developed by the Nevsky Design Bureau in the late 80s, inspired by the American Tarava UDC. The Soviet "Ivan Tarava" turned out to be smaller in size, with a standard displacement of only 25 tons versus 000 for the original. However, its performance characteristics are impressive even in comparison with its successor, the modern project 33.

So, the promising Russian UDC has a standard displacement of 30 tons, a total displacement of 000, a cruising range of 40 miles against the declared 000 of the Ivan Tarava. A modern ship has a better landing capacity: up to 6000 marines and up to 8000 combat units equipment against 1000 marines and 40 tanks from the Soviet. However, in terms of the composition of the air wing, the unrealized project looks more attractive - 12 Ka-29 airborne transport helicopters in the landing version or 25 Ka-27 anti-submarine helicopters in the anti-submarine version against 16 helicopters and 4 UAVs on the UDC project 23900.

In general, the Soviet universal amphibious assault ship-helicopter carrier is very impressive in terms of its performance characteristics even today. Undoubtedly, a pair of such UDCs, "Kremenchug" and "Kherson", would significantly increase the capabilities of the USSR Navy and the Russian Navy in operations in the far sea and ocean zone. Alas, this promising project was ruined by departmental intrigues when the "battle for the slipway" unfolded. Shipyards capable of building ships of such a large displacement were needed for TAVKR, so competitors used frankly sabotage moves against Ivan Tarava.

Directly on the nose of the helicopter carrier, they proposed to place an artillery mount and set the task for the developers to “justify” such an unusual decision for an aircraft carrier. Then they began to add additional tasks, complicating and frankly clouding the project, which in the end did not take place.

We can only regret it.
Ctrl Enter
Noticed oshЫbku Highlight text and press. Ctrl + Enter
Reporterin Yandex News
Reporterin Yandex Zen
31 comment
Information
Dear reader, to leave comments on the publication, you must sign in.