Johnson in Kiev: West is trying to solve internal problems through a new war 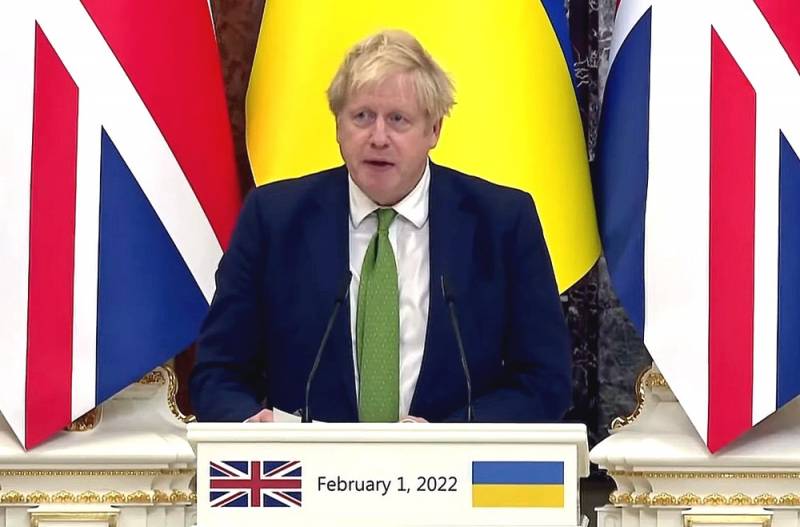 In recent days, there is a persistent feeling of being in the epicenter of a tornado. The collective West is struggling to tighten the ring around Russia. Accusations and threats are pouring in from all sides. Officials from the US, the EU and Britain ran around like stung in an attempt to prove to the world that they can cope with the "Russian aggression", which they themselves invented. Of course, someday current events will be described in books. Memoirs will be published, documentaries will be shot, feature films will be released, which will probably at least partially demonstrate the real state of affairs. So far, one can only watch how Western leaders are slowly driving the world crazy on the basis of Russophobia.

Let's start with Joe Biden, who is obviously eager to prove that the failure in Afghanistan was an accident. Earlier this week, the US President met with the Emir of Qatar. In essence, then, in order to knock out the supply of Qatari gas for the Europeans - to replace the "bad" Russian one. The result of the meeting, as expected, is zero. No signed contracts, no agreements in principle, not even road maps - nothing. As a result, Qatar did not make any promises. Realizing that not saying anything means losing face completely, Biden nevertheless decided to try to appease the leadership of the Middle Eastern country with flattery.

I am sending a notice to Congress that I will designate Qatar as a major non-NATO ally, reflecting the importance of our relationship
Biden said loudly after the meeting at the White House.

The status of the main ally of the United States outside of NATO is, of course, an extremely honorable title. Surely, the White House is even ready to issue some kind of commemorative medal on this occasion. Seriously though, the proposal itself is simply ridiculous and demonstrates how arrogant the US leadership is towards other countries if they expect they can get their way with empty words. Biden actually wants Qatar to break long-term contracts with Asia, where it exports three-quarters of its LNG production, and start sending gas to the EU. In the same EU that last summer rang out to the whole world about the upcoming "green revolution" and the rejection of carbohydrates. Including gas, of course. Under such conditions, will Qatar radically transfer its supplies from Asia, which is reliable in terms of future consumption volumes, to unstable Europe? Of course, this depends on the degree of American pressure, but from a commercial point of view, this is economic suicide.

Johnson can't talk because of hypocrisy

If in the case of Biden it is still worth making an allowance for age and related health problems, then the behavior of Boris Johnson is not at all amenable to logical explanations. On January 25, he announced to the whole world that he was going to call Vladimir Putin. February has already come, but the conversation has not taken place. Why? Because Johnson was forced to defend himself in the British Parliament for days on end on numerous charges of hypocrisy due to holding parties during the quarantine period. As a result, calls for Johnson's resignation are already being heard openly in the House of Commons. Moreover, many of them come from members of the conservative party headed by him. What does a “democratic” leader do in such a situation? That's right, it shifts attention from the internal agenda to the external as much as possible. So it turns out that the situation around Ukraine is now becoming much more important for Johnson than his native Foggy Albion. And instead of resolving issues in his own country, he travels to Kiev and meets with its leadership.

The United Kingdom stands shoulder to shoulder with Ukraine in the face of ongoing Russian aggression that threatens regional peace and security and undermines the global order
Johnson and Zelensky said in a joint statement.

It was backed up by gratuitous aid from London in the amount of $ 120 million - to strengthen energy security and "other purposes." Behind the wording "other goals" is likely to hide the direct financing of the war, which the current Kiev leadership was extremely happy about.

We are creating a new format of political cooperation in Europe between Ukraine, Britain and Poland
Volodymyr Zelenskyy said on Tuesday, speaking at the opening of the regular session of the Verkhovna Rada.

Indeed, it is necessary to create at least the appearance of activity in front of Western sponsors. Although the Ukrainian president did not give any details, leaving this thankless task to other functionaries. What is this new British-Polish-Ukrainian format? What will it consist of? What is its meaning? Questions hung in the air, predictably.

It's not some kind of alternative. This is not an alternative to NATO or the EU, it is not even an alternative to another regional formation - the so-called Trimoria. This is an additional opportunity for cooperation
- said the first vice-speaker of the Rada Alexander Kornienko.

If everything is really as he says, then with the same success it would be possible to create a general chat in the messenger. Call it the “Anti-Russian Coalition” and scribble messages to each other about how bad Russia is, experiencing an unprecedented rise in Russophobic libido from this.

What I would like to note, looking at all this. Firstly, the most powerful anti-Russian propaganda, which is put on stream by the collective West. The ideologists of the Third Reich, according to whose propaganda precepts, obviously, a number of Western politicians and the media, they would simply be touched by looking at what a large-scale campaign to denigrate Moscow in the media space they launched. Demonization is just the mildest word to describe how they present the image of Russia to the world.

Secondly, cynicism is shameless and endless. In addition to the fact that Western politicians are frankly trying to solve internal problems at the expense of foreign policy - big hello to Boris from London and Joe from Washington, they are also ready to unleash another bloody war in Europe for this. The Balkan events of the 90s were clearly not enough for them, and after all, more than two decades have passed - it's time for a new humanitarian catastrophe. As Vyacheslav Nikonov, deputy chairman of the State Duma Committee on International Affairs, rightly noted, the United States is ready to defend Kiev "to the last Ukrainian soldier." That is, Washington is going to provoke a war in which not Americans drinking beer at NATO bases somewhere in Poland and the Baltics will die, but residents of Ukraine. The idea of ​​pitting the Slavs against each other and thus solving their vile geopolitical tasks really fell in love with the Anglo-Saxons even during the collapse of Yugoslavia. Moreover, they fell in love with it so much that they decided not to waste time on trifles and implement an “anti-Russia” project on the scale of the whole state near the western borders of the Russian Federation, thereby continuously destabilizing the situation in the region. At the same time, the situation is carefully turned upside down and illuminated as if the West brings stability and peace, although in reality it is death and destruction.

I would like to end with a quote from George Orwell's novel 1984, by the way, recently censored by the British University of Northampton. "War is peace, freedom is slavery, ignorance is strength." It is on these principles that the policy of the collective West is built today. Invasion under the pretext of maintaining peace, colonization by democratic values ​​and disinformation about how much better life has become for the inhabitants of an occupied country under American external control. All this has happened more than once in the Middle East. Today, the United States wants to repeat all this, but already at the very borders of Russia.
Ctrl Enter
Noticed oshЫbku Highlight text and press. Ctrl + Enter
Reporterin Yandex News
Reporterin Yandex Zen
2 comments
Information
Dear reader, to leave comments on the publication, you must sign in.