After the Minsk agreements: three options for the development of events in the Donbass 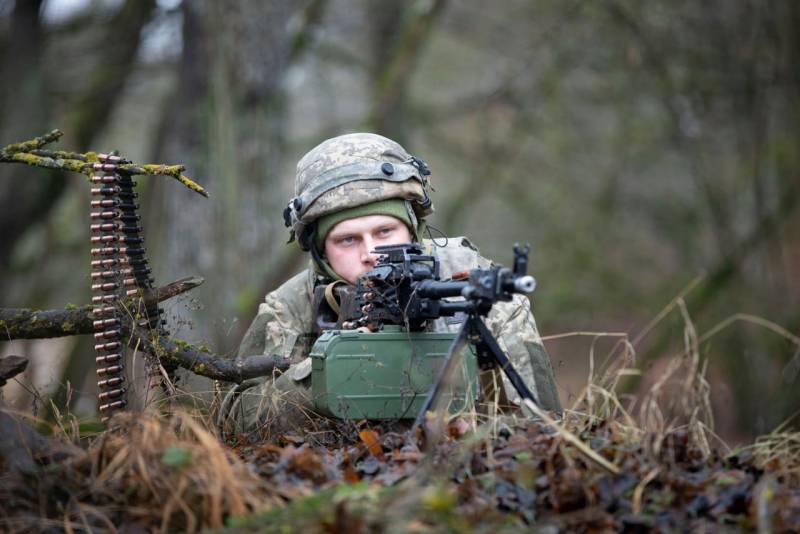 So, it's done. The words that Kiev would not comply with the provisions of the Minsk Agreements under any circumstances did not come from the lips of another political freak in an “embroidered shirt” or shabby camouflage, but were voiced by the country’s National Security and Defense Council Secretary Alexei Danilov. Moreover, which is quite characteristic, this happened during an interview that he gave to the Associated Press agency.


That is, in fact, this is the message of the current government "nezalezhnaya" to the entire "collective West". We won't - and that's it! For "chaos and destruction of the country will come." I will refrain from irony about the fact that Pan Danilov uses these words in the future, and not in the present tense. If life in Ukraine teaches anything, it is, first of all, that there is no such thing as “worse than nowhere”. There is always somewhere, no matter how lousy things are at the moment ...

However, the main thing in the statement of a high-ranking representative of Kiev is that it was made publicly and openly. The fact that the local regime does not want, cannot and could never come close to fulfilling at least part of the Minsk-2 points, even if it had that very ardent desire, I personally wrote many times. The question was how long the diplomatic “peace settlement game” would last, with the participation not only of Moscow and Kiev, but also of the countries participating in the Normandy format. Well, and, of course, Washington, who was invisibly present and present in every “round” of it. What will happen now, when even their most ardent adherents will have to say goodbye to the fetish, dummy, simulacrum (call it what you want) called the Minsk Agreements? What will happen next? Let's try to figure it out by reducing the options to three main scenarios.

Let me repeat myself about Danilov's demarche: the inevitable happened. This is definitely not a manifestation of the “Makhnovshchina” that is fully inherent in Kiev, when one leader or “statesman” suddenly starts to broadcast things that are categorically contrary to the position of others. This is precisely the official position of the authorities, simply voiced by one of its representatives, whose words can, in principle, be disowned - if the overseas "regional committee" gets completely pissed off. By the way, no later than December 22 last year, Zelensky decided to make resonant statements regarding the external policy "nezalezhnoy" has the right to himself, the head of his office, and even the prime minister of the country. And no one else. However, there is no information yet about the severe punishment for the "violator of the convention". Or is the presidential decree not a decree for Danilov? No wonder, since Zelensky himself, after the memorable visit of Anthony Blinken, who literally poked his nose into “Minsk” and demanded the implementation of this agreement (or, at least, active imitation of implementation), recorded a rather strange video message “to the nation”, in which he vaguely alluded to the fact that some "evil guys" are trying to "force Ukraine to make concessions in order to weaken it."

Even earlier, he had voiced a completely crazy and impracticable idea regarding a "nationwide referendum", at which, de facto, one can only decide whether it is worth implementing the agreements signed in 2015 or not giving a damn about them. As you can see, they managed without any referendum - but how nice! Danilov said as he cut off:

"Minsk" was signed "under the muzzle of a Russian cannon" and, by the way, with the tacit connivance of the "Germans and French."
But "it was clear to all reasonable people that it was impossible to implement such documents." First of all, because it "will lead to the destruction of Ukraine" and "chaos" caused by the fact that "society will not accept these agreements." So, the word has been said, the verdict on Minsk has been passed. What's next?

As a matter of fact, the same Danilov, to be absolutely precise, did not say something like: “Everything, to hell with the “peace settlement”, I went to warm up the tank!” No, this figure deigned to express himself in the sense that the agreements “unacceptable” for Kiev should be “reconsidered”. First of all, in matters of granting the Donbass "broad autonomy" and "large-scale amnesty." It is in this vicious idea, most likely, that the new course of the leadership of Ukraine will consist: "Minsk" is unfeasible, let's rewrite it! Let's change everything in general - the venue of the negotiations, the composition of their participants. And most importantly, those “starting positions” from which, in fact, we will begin to try to conduct a dialogue about something. Naturally, in the end, instead of a really extremely unrealistic, but at least well-intentioned plan for the reintegration of the rebellious region into the “non-sovereign” into the light of day, detailed instructions for its complete and unconditional surrender should appear. With all the ensuing consequences.

It is clear that both for the DPR and LPR, and for Russia, such initiatives are absolutely unacceptable. Literally everything will not suit us here: neither the transfer of the negotiating platform from Belarus to, say, Turkey, nor the fact that instead of the Germans and French, who are thirsty for our energy carriers and who do not want a war in Europe, the crazy “hawks” from the USA and Britain will enter the negotiating table. Nor, much less, the direction that all this warm company will try to give to the “renewed” conflict resolution process. No, you bastards! Each subsequent edition of the relevant agreements will be for us unambiguously much more losing and unacceptable than the previous ones. And why would Moscow, Donetsk and Luhansk go for this? Pan Danilov said that "Minsk-2" "was signed under the barrel of a Russian cannon." Now he, obviously, hopes that some "Istanbul-1" will be waved "at gunpoint" by the "unprecedented", "hellish" or other sanctions promised to us. Will not wait. Moscow has repeatedly stated that Minsk-2 is not subject to any “adjustment”, “revision” and other types of “creative rethinking”.

And after all, the West, having arranged all the trouble with the "imminent Russian invasion of Ukraine" and to this day continues to spin this topic, for sure, is counting on the first option outlined above. The Kremlin will falter, Moscow will "give back" and, having played some more time in the "peace negotiations", will allow Kiev to gobble up the Republic and begin to take a closer look at the Crimea. Hence all the hysteria around the most diverse "packages" and sets of restrictions that Washington and London intend to use against our country, as soon as they manage to craft a more or less suitable excuse. And ideally - also to incite their allies from the European Union to the same indecency. Well, no - so force them to do so. But what if the stubborn Russians still refuse to surrender the Donbass? Well, in this regard, you can be sure that the variant "in a bad way" has already been prepared. The pumping of Ukraine with weapons and the intelligence received in the LDNR (at least those that Eduard Basurin announced publicly just the day before) unequivocally indicate that the military version of “de-occupation” is not only available to the leadership of the “nezalezhnaya” - it is being worked out and prepared in all seriousness .

It is clear that no one is going to take Luhansk and Donetsk by storm - after all, the plan in this case is much more cunning and meaner than some primitive “Croatian scenario”. The whole point here is to expose Ukraine at any cost as a "victim of aggression", and the Armed Forces of Ukraine - not as punishers, but as "heroes who die for their land." That is, to provoke not only the Republics, but precisely Russia, forcing them to openly use their armed forces to save them. The task, alas, is technically quite feasible. At the same time, the West is well aware that this time there will be no “Georgian option” with stopping the offensive before reaching the capital. Nevertheless, there, apparently, they intend at a certain stage of the armed conflict to present Moscow with such conditions that are guaranteed to force it not only to refuse to decisively restore order in Kiev, but also to sign with the local "authorities" a certain "substitute" for "Minsk" on capitulation conditions, which have already been discussed above.

Option 3: Window of Opportunity For Russia and Donbass

As it is easy to understand, both first options will mean for our country not just the surrender of the Republics, counting solely on its help and protection, but a colossal, irreparable geopolitical defeat. The complete collapse of all those ambitions, which Moscow announced at the end of last year and which it is trying to defend now, will only be the beginning. Further, much more unpleasant and even terrible things will follow. And the only way to avoid such an outcome seems to be as decisive as possible to seize the initiative from the leader today, alas, quite successfully own game of the "collective West". And this can and should be done just by using those gross mistakes that the inadequate power of the "nezalezhnoy" allows. Will you not comply with the Minsk agreements? Well, great - in this case, we have a free hand for any form of support for the Republics! It is clear that everything should be done “according to the rules” and adhering to certain norms and processes “for decency”. Here are just the requirements that Danilov's statement be disavowed by himself, or by the same Zelensky, in this case is completely insufficient.

They themselves do not know what they are doing and saying. The same clown president, after meeting with British Prime Minister Johnson, made a number of statements that can be interpreted as the readiness of Minsk to comply. But exactly what "seems to be." In his usual manner, Zelensky openly played the fool, claiming that he “does not know who signed these agreements”, and ended his speech by saying that “adult boys” (to whom he considers himself) “should do something to de-occupy and protect states". The nonsense of a madman, but, however, nonsense, allowing for a very broad interpretation. Moscow, taking advantage of the moment, should deliver an ultimatum to Kiev - yes, obviously impossible! Something like the adoption by February 14 of the entire package of laws envisaged by Minsk-2. This, of course, will not be done - that's wonderful! As far as it is known, it is on this day that the State Duma of Russia should consider the issue of appealing to the president regarding the recognition of the DPR and LPR. The result here should be unambiguous.

There are simply no other options. The time when they could be chosen, trying to find the least painful, has passed irrevocably. Our country must launch an offensive - for the time being, a foreign policy one, using diplomatic means. Life after "Minsk" exists - but it depends only on Russia what it will be like for millions of people. And will...
Ctrl Enter
Noticed oshЫbku Highlight text and press. Ctrl + Enter
Reporterin Yandex News
Reporterin Yandex Zen
20 comments
Information
Dear reader, to leave comments on the publication, you must sign in.