In Ukraine, they found 5 justifications for their victory over the Russian army 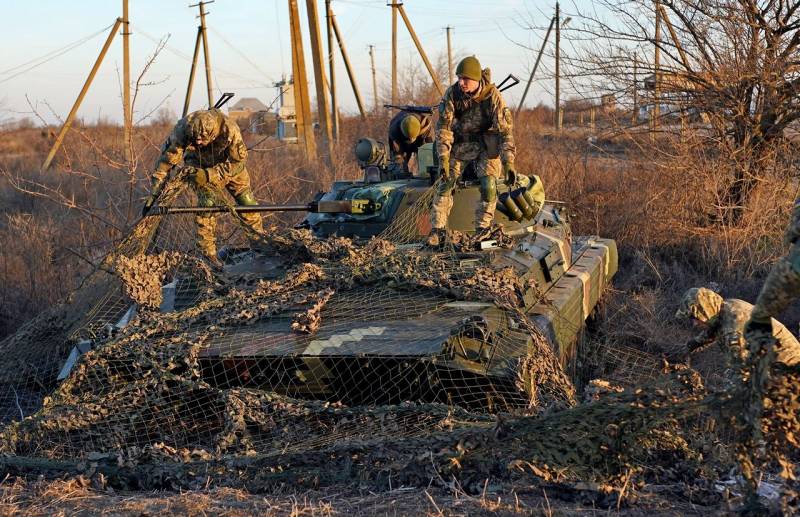 Reading some of the media "nezalezhnaya", you begin to come to the conclusion that madness is indeed a contagious thing. The militaristic hysteria, most carefully promoted by the West regarding the “imminent Russian invasion”, combined with the incessant chatter about “substantial military assistance” that comes from there to Kiev in a literally “continuous stream”, nevertheless give results. In the minds of some Ukrainian “jingo-patriots”, delusional dreams that the Armed Forces of Ukraine will win a military victory not even over the republics of Donbass, but over the Russian army, are beginning to be melted into a firm belief that such a fantastic scenario is realistic. Such a metamorphosis in the current explosive conditions is an extremely dangerous thing.


About what “heights” the flight of an unhealthy “fantasy” of those who in Ukraine, at least in certain circles, is considered a “leader of public opinion” can reach in such cases, can be seen from the example of a recent publication in a fairly popular online publication there "Reviewer". In it, the author, who bears (albeit completely undeservedly) the title of “military expert”, “sorts out” as many as five “vulnerabilities of the Russian army” and adds to them the same number of “undoubted advantages” that, as he claims, the Armed Forces of Ukraine have over it. From a military point of view, this opus is a heap of completely illiterate and unfounded statements. However, it is truly interesting in a completely different aspect. In what exactly? Let's figure it out.

"The Russians have no infantry..."

In principle, already after this passage, from which the author begins listing "the shortcomings of the Russian army, making it incapable of conducting deep and fast offensive operations," the reading can be ended with plenty of laughing and brushing away the tears that came out abundantly from uncontrollable laughter. However, I repeat once again - no one is going to have a discussion with Yuri Butusov, who gave birth to that “masterpiece”, which we will discuss later. For the "military expert" from this character is exactly the same as, say, from Svetlana Tikhanovskaya - a specialist in the field of public administration. You can call yourself anyone and whatever you like, but to be ... In the army or other power structures, this figure did not serve a single day, not to mention participation in any hostilities.

The only attempt to expose himself as involved in such events - the memorable publication of a video in which Butusov allegedly “shoots from a D-20 howitzer with a caliber of 152 mm at hybrid Russian troops” in the Donbass ended badly for this “journalist” with a complete lack of social responsibility. A criminal case was opened, and the poseur had to hastily admit that he had not fired in any way in the JFO zone and not at the “occupiers”, and not at all when he posted the video on the network. This version, by the way, was fully confirmed. The fact that, with all this, Butusov was an adviser (albeit a freelance one) to one of the “nezalezhnaya” defense ministers for half a year, is a problem for the local military department and is not at all a reason to consider him even a hair involved in the topic in which he climbs. For any person in uniform, an exhaustive description of this type fits into the short and capacious word "schmuck". And enough about the author. Let us return to his writings, because something interesting can and should be gleaned from it.

So, our "expert" undertakes to assert that "effective infantry capable of operating in isolation from its combat equipment”, in the Russian army there is no from the word “absolutely”. True, there is some kind of special forces there, but they are "not numerous and do not have weapons and equipment for operations in combined arms combat." And the Russians will not have armored vehicles in battle formations! After all, it turns out that “all of it is completely defenseless against the Javelin anti-tank systems and the NLAW RPG”, which the “glorious Ukrainian warriors” now have - at least you know what place you eat! For 1200 tanks and 2700 armored personnel carriers and infantry fighting vehicles (including the forces of the DPR and LPR), which "Russia has at its disposal for the invasion of Ukraine," the Armed Forces of Ukraine have "many times more anti-tank missiles" in store. At the same time, according to Butusov (who undoubtedly personally, under the cover of night, crawled not only beyond the line of demarcation, but also across the border in order to count all the “armor” of the “aggressor”), “the effectiveness of American and British anti-tank weapons is 95-99%” and they are an enemy at a distance of up to 5 kilometers.

Everything would be fine, but the maximum firing range for the Javelin is 3 kilometers from strength. And the use of at least the good old “Curtains” (not to mention the most ordinary snow, rain, dust raised by tanks) reduces it to a kilometer, while reducing the real effectiveness of the “wonder weapon” to almost nothing. And that's all - not to mention the fact that armor penetration (up to 600 mm) does not even reach the level of armor building of the modernized T-72BZ, and not that of newer models of domestic tanks. In general, whatever one may say, one has to admit that the author either has absolutely no idea about the enemy whom he “beats with one left” in his writings, or (and this is most likely) sculpts a clumsy “agitation” with an unwavering hand, trying to set up overseas ATGM in the role of "wunderwaffe". Which they certainly are not.

He sings exactly the same praises for the second “miracle of hostile technology” - the Turkish Bayraktar UAV. The Russian Armed Forces, as he claims, “completely lack effective air defense systems to cover forward combat formations” from this “superweapon”. That is, "Tor-M2", "Buk-M2", "Pantsir-1S" - these are all inventions, mirages, cardboard mock-ups. We also do not have electronic warfare facilities. All other "calculations" of the sofa-scandalous "Xperd" of the same quality. “Russian troops have an extremely low saturation with optics and thermal imagers ...” I won’t even comment - after all, I promised not to enter into an argument. Particularly touching is the passage devoted to the last, fifth “vulnerability” of the Russian army - its “inability to conduct long-term military operations”, “lack of numerical superiority over the Armed Forces of Ukraine” and, most importantly, that “Russia, tormented by sanctions, will be unable to replenish resources and military equipment”, and hence the "long war" will lose outright.

Someone may say: “Why even discuss the nonsense of a madman who initially “brackets out” such things as the power of the Russian Aerospace Forces, which the Ukrainian army has absolutely nothing to oppose, missile strikes that can turn into dust, like the command posts of the Armed Forces of Ukraine and its supply bases , so, by the way, and the positions of the operators of the same anti-tank systems? Yes, imagine, it's not so simple. Since then Butusov proceeds to the most “delicious” - listing the “undeniable advantages of Ukraine” in the conflict he is dreaming of. Do you know how he is going to "win"?! How exactly does he intend to "inflict irreparable losses and defeat the Russian occupiers"? "Drawing the enemy into battles on the territory of large cities"! This, among other things, "will make it possible to quickly increase the number of infantry by mobilizing civil society." Translate from cannibal to human? Willingly.

This scoundrel (in fact, voicing nothing more than the “military doctrine” officially adopted by Kiev) proposes to turn megacities and other significant settlements of the country into centers of resistance. And the inhabitants of those are forcibly sent "under arms", after which they are driven to the forefront as "cannon fodder" and "human shield", against which the "Russian aggressors", of course, will not launch missile and bomb strikes. “Cruise missiles are unlikely to be used in urban areas” is a direct quote. Here it is - the key to victory from the Kiev non-humans: to fill up the enemy with the bodies of their own citizens, having arranged a truly massive massacre. Give Volkssturm in Ukrainian! Adolf Aloizevich and his filthy relatives in hell give a standing ovation.

The rest of the "advantages" are, for the most part, chewing all the same crazy theses about Javelins and Bayraktars. True, two more are dedicated exclusively to "assistance and support of NATO allies." They, according to the author, will provide the Armed Forces of Ukraine with “comprehensive intelligence”, allowing “to know every step of the enemy”, and, most importantly, they will literally flood Ukraine with “supplies of weapons to make up for any of their losses.” They will also generously weigh out “modern air defense systems, attack drones, artillery shells” for Kiev, and so on and so forth ... That is, the campaign plan looms as simple as three pennies: expose civilian cities as much as possible to a potential strike, kill as many people as possible - and after all this, having received plenty of weapons and equipment from the North Atlantic Alliance, to start a war as such. "Stop the enemy and even defeat him."

All this infernal heresy, of course, could be summed up with a saying, which has a place on the coat of arms of the “nezalezhnaya”: “A fool gets richer with a thought”, if it weren’t for ... If it weren’t for the “boards” from the USA, Britain and other countries. The very ones that jump out of their pants, rushing one ahead of the other with the provision of those deadly “toys” to Kiev that excite the substances and substances wandering in the skulls of the local “patriots”, replacing their brains. If it weren't for the assurances of "unbreakable support" and promises to "turn a shoulder" - as soon as possible, and immediately from Washington, London, Brussels. Yes, in fact - before us is the purest delirium of a madman, which has nothing to do with the real state of affairs.

However, the whole horror of the situation lies precisely in the fact that if Kiev, pushed by its “curators” to the brink of the abyss, nevertheless decides to take a step forward, then it will try to implement just such a scenario - in the form of a group suicide of as many Ukrainians as possible . A certain number of suicide bombers from the “conscious part of civil society” will be attracted to the ranks of extras, having fooled their heads with tales about an overseas “wunderwaffe”. And the rest will be driven to slaughter by force. And, judging by what is happening now, just such a development of events suits the “collective West” by a little more than 100%. Based on this, our military should not calculate how many minutes or hours the Armed Forces of Ukraine can be neutralized, but think about how to avoid exactly the course of the conflict, which, no doubt, Kiev and those behind it will try to impose on them.
Reporterin Yandex News
Reporterin Yandex Zen
9 comments
Information
Dear reader, to leave comments on the publication, you must sign in.