Protests in Canada could inspire other 'Western democracies' 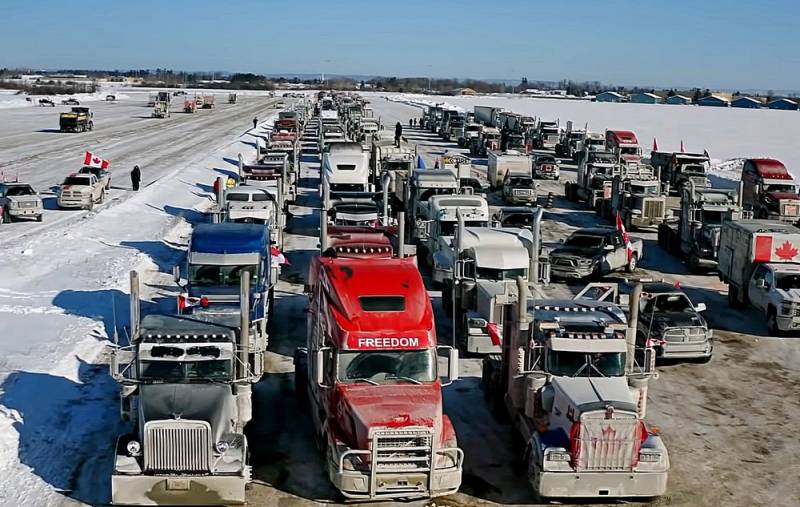 Canada in the current crisis with Russia is supporting Ukraine, and I don't know how far-fetched that is," TV presenter Koksal told Canadian Public Safety Minister Mendicino, "however, there are fears that the growing protests may be fueling Russian actors. But perhaps they incited them from the very beginning.
We, too, like to focus on fueling and inciting "subjects", not paying attention to the objective side of the matter. By the way, Koksal and Mendicino would not be superfluous to look for a Ukrainian trace in the events, because almost a million Ukrainians live in Canada. Surely, there are more of them among the protesters than Russians. Although the Canadians themselves, of course, do not distinguish between the Eastern Slavs, for them they are all Russians.

The safe haven of capitalism is not so quiet

There are countries in the Western world that, in ideological disputes, always cite “capitalism with a human face” as an example. Canada, which continues to swear allegiance to the Queen of England, who has not held a foreign policy without the consent of the State Department, is just such a country. In the view of the agitated inhabitants of Eastern Europe, life in Canada is heaven on earth. Only crazy people can be unhappy with something in Canada.

Of course, nothing like this exists in reality, Canadian life is not fundamentally different from life in a typical market country with all its hardships: mortgages, loans, prohibitive prices, unemployment, police. The dissatisfaction of Canadian truckers is essentially no different from the dissatisfaction of Kazakh gas and oil workers. And the anti-covid agenda is just an excuse to declare a “vote of no confidence” in the authorities.

As soon as Ottawa smelled of fried food, Trudeau's "golden boy" hid with his family in a "secret hideout." Right before leaving, he said:

The marginal minority of people moving towards Ottawa, expressing their unacceptable views, does not represent the position of Canadians who supported each other, who know that following science and being ready to protect each other is the best way to continue to guarantee our freedoms, our rights, our values ​​as a country. .
He is not an angry Lukashenka with a gun.

Following the drivers on the streets of Canada, according to various estimates, up to one and a half million people poured out, even references to 1776, when the United States attacked Canada, sounded. In some cities, protesters are blocking the streets, and social networks are circulating the idea of ​​​​repeating last year’s “storming of the Capitol” in a local way. Moreover, protests and hatred of the government united Anglophones, Francophones, and Indians.

In short, social unrest in the safe haven of capitalism is no less massive than in other countries.

The Canadian media keep focusing on the fact that the protesters are "Islamophobes", "racists" and "anti-vaxxers", that is, they act strictly within the framework of Trudeau's ideological guidelines. Obviously, the authorities and the media underestimate the seriousness of the protests. In the meantime, even truckers alone can seriously spoil Trudeau's blood, because 2/3 of all trade with the United States passes through them. And this means that in a week the counters of Canadian stores will be empty, there will be interruptions in medicines in hospitals, and fuel shortages at gas stations. In addition, the protest raised 9 million Canadian dollars with the help of crowdfunding, and for such an amount you can feed the protesters with tourtieres and drink cider for a long time.

The authorities as a whole were dumbfounded by the protest activity of Canadians. Local governments hastily began to issue surreal decrees: it is forbidden to stand along the roads, it is forbidden to finance the protest. The police decided "until a certain point" not to issue fines and not to evacuate trucks, as if it were possible when it comes to tens of thousands of cars and hundreds of thousands of protesters.

Our liberal media have been filled with water in their mouths about the fairness and validity of the demands of Canadian citizens. Some wrote that shopkeepers are afraid of pogroms - apparently, this is the most important thing in the situation.

The glamorous government of Canada, praised by Westerners as a model of pluralism, multiculturalism, meritocracy and progressiveness, has come to an unequal battle with the real problems of ordinary people who do not care about the state. Social dissatisfactioneconomic Trudeau's cabinet policy has been accumulating for a long time and has been fueled by corruption scandals. And in general, it is easy to imagine what attitude ordinary Canadians have towards Trudeau, given his origins and the image of a playboy.

From his "secret hideout," Trudeau said via video link:

I have attended protests in the past when I agreed with their agendas, when I encouraged these people to express their concerns, a good example of this is the BLM event. I have made the decision not to support protests that express hatred and violence against their fellow citizens.
The current major protest is the first for Trudeau (Prime Minister since 2015), but not the first in Canada's recent history. So, in 2011, Toronto was rocked by rallies against property stratification and inequality, during which there was even an attempt to storm one of the bank's offices in the city center. Then everything ended with nothing.

These spontaneous protests do not have a strategic perspective either. There is no leader, no headquarters, no sane requirements. Let's say truckers overthrow Trudeau, achieve the desired concessions on covid and other little things. But what's next? Canada will remain at the mercy of American and British corporations, and the shameful words will flaunt in the state oath:

I solemnly declare that I will be faithful and devoted to Her Majesty, Queen Elizabeth II, Queen of Canada, Her Heirs and Successors.
Even now, at the peak of events, it can be said with confidence that the political myths about Western democracies are once again being destroyed by visual facts. With every protest like this, the showcase of the Western way of life no longer looks so attractive. Moreover, if Trudeau is forced to resign by Canadian truckers, it will serve as a kind of lesson for all the “lower classes” in rich countries. In the same way that Canadians at some point remembered the storming of the Capitol, American, British, French, German workers, drivers, deliveries and so on will be inspired by the successful experience of Canadians. Support groups for Canadian protests have already emerged in European cities. Europe is also preparing its own "Convoy of freedom".

Another thing is that all these protest turmoil across the ocean are infinitely far from our, Russian, problems. However, the complete indifference of Canadians to the anti-Russian hysteria of their government, the instant attempts to find “Russian” and “Chinese” traces by the Canadian press show the artificiality and virtuality of the “international agenda” within the Western countries themselves. Ordinary people do not care about government propaganda of the Russian threat, European security and "national interests" thousands of miles away.
Ctrl Enter
Noticed oshЫbku Highlight text and press. Ctrl + Enter
Reporterin Yandex News
Reporterin Yandex Zen
8 comments
Information
Dear reader, to leave comments on the publication, you must sign in.