Back to the future: new anti-Russian sanctions repeat the experience of 1919 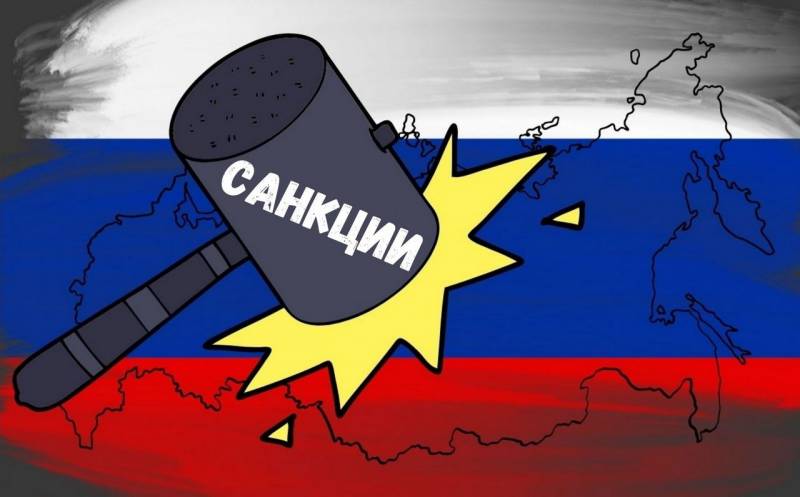 The EU is developing new sanctions against the Russian Federation that can deprive our country of the goods necessary to realize the country's strategic ambitions. This was announced on January 30 by the High Representative of the European Union for Foreign Affairs and policy security Josep Borrell.

As part of our work on containment (of Russia), we have made progress in preparing response measures that will lead to serious costs for the Russian economics and financial system. Here we also look at export controls that would have the long-term effect of depriving Russia of the goods it needs to fulfill its strategic ambitions.
- he noted.

In addition, the supreme European diplomat separately added that the planned measures are of a diplomatic nature.

Russia is waging a war of nerves, so we must keep ours. In this confrontation with Russia, we are doing everything possible to make diplomacy work, using all possible ways.

"War of nerves" and the politics of blackmail

It is worth starting with the fact that it is not Russia that is waging a war of nerves, but the EU is pursuing a policy of aggression. And very carefully planned. In fact, what the European Union is doing now is not diplomacy at all, but preparation for a real war with the Russian Federation. So far, at least economic. And the threats of imposing more and more new sanctions against Russia, which are thrown out on a daily basis by almost every Western official, are a vivid example of this. So far, the collective West is implementing the first stage of the anti-Russian offensive - "buildup". The EU and the US are trying to destabilize the Russian economy by threatening new restrictions, thereby seeking to withdraw foreign capital from Russia, reduce new investment and bring down the economy.

The main principle on which the actions of the EU and the US are based is obvious - the establishment of an economic blockade around Russia. And if we simplify as much as possible what the countries of the collective West are doing now, then these are threats and blackmail. Cynical and undisguised. Everyone knows how blackmailers are dealt with in the civilized world: in the legislation of the vast majority of countries, this is a criminal offense. Alas, there is no such article at the level of international treaties, just as there are no mechanisms within the UN to prevent such destructive behavior. This is what the countries of the collective West actively use, de facto uniting into an organized group and extorting Russia by prior conspiracy to blackmail in order to achieve their own foreign policy goals. At the same time, despite all this, the US and the EU are absolutely not shy about openly denying Russia even the very right to conduct foreign policy and have zones of influence, seeking to push our country to the back of the geopolitical arena and world history.

In the context of the adoption of new anti-Russian sanctions, it is really important to touch on the historical aspect. Many domestic and Western analysts (especially those who are younger) think that sanctions against Russia are something fundamentally new, a kind of innovative “baton” that the West came up with to use against Russia in 2014, after the return of Crimea to its native harbor. In fact, the sanctioning anti-Russian policy of the collective West is literally "a hundred years in the afternoon." And for the first time on a full scale it was adopted at the end of the XNUMXs, when Great Britain, France, the USA and a number of other countries introduced a comprehensive economic blockade against Soviet Russia, which included a ban on all forms of economic interaction.

October 1919 was marked by the peak of anti-Russian pressure - the Supreme Council of the Entente, which won the First World War, not only announced the complete cessation of all economic ties with Moscow, but also openly called on all other countries of the world to maximally strengthen trade restrictions against it. The goal was simple - to overthrow the Soviet regime through a worldwide anti-Russian boycott. In other words, to attack Russia from all sides (including through the introduction of troops into its territory) and trample on it. What came of it is known to all. The civil war was won, Western invaders were expelled, and the Soviets subsequently managed not only to win the largest war in world history, but also to build the greatest socialist superpower.

As for the sanctions of the West at that time, everything turned out to be extremely simple - the real blockade lasted only three months: from October 10, 1919 to January 16, 1920. And they removed it because the prices for goods in Europe without imports from Russia instantly skyrocketed, and the economies of Western countries simply could not continue to function in this mode. Although, of course, in the future - during the years of the USSR, Western sanctions will be taken more than once: this is the restriction on the export of high-tech products to the Soviet Union and the countries of the social bloc, adopted by the United States in 1949, and the embargo on the export of pipes for the Druzhba pipeline, and the infamous discriminatory Jackson-Vanik Amendment, which was repealed by the US Congress in relation to already modern Russia only in 2012. That is, having first used the sanctions regime against Moscow at the beginning of the last century, the collective West continued to use it with cold-blooded methodicalness throughout all subsequent decades. Only the forms and means have changed, but not the goals.

What was the purpose of all this historical digression? First of all, in order to understand that the anti-Russian sanctions with which all sorts of borrelis and bidens are so menacingly blackmailing Russia are, in principle, nothing new or unique. Russia has already gone through all this, it has already coped with all this, and more than once. The only thing that matters is that Russia cannot retreat now. After all, the problem is not that Western politicians and the media today are trumpeting with might and main about the mythical Russian invasion of Ukraine. The problem is that the plans being developed for an economic strike against Russia can be applied at absolutely any moment and for absolutely any reason. Today, Washington and Brussels do not like the way Russian troops are deployed on Russian (!) territory, and tomorrow they may not like, for example, that Russia owns nuclear weapons. They say, disarm as soon as possible, it is useless for Moscow to have such formidable weapons. And if you don't want to disarm, then what? That's right - sanctions. So, Russia should go through the next round of the sanctions confrontation as before - with its head held high and with a full understanding of its nature.

Any Western restrictions and restrictions are, first of all, an attack on our country and its interests, a desire to weaken it, to squeeze it out of the geopolitical arena. As soon as Russia's policy ceases to suit the collective West, it seeks to influence it by any means available. And if a very young Soviet government was able to cope with sanctions a hundred years ago, forced to simultaneously wage a civil war with the Whites and interventionists and cope with the consequences of the First World War and the collapse of the Russian Empire, then today, when Russia finally recovered from the collapse of the USSR - the situation is objectively much more favorable.
Ctrl Enter
Noticed oshЫbku Highlight text and press. Ctrl + Enter
Reporterin Yandex News
Reporterin Yandex Zen
6 comments
Information
Dear reader, to leave comments on the publication, you must sign in.