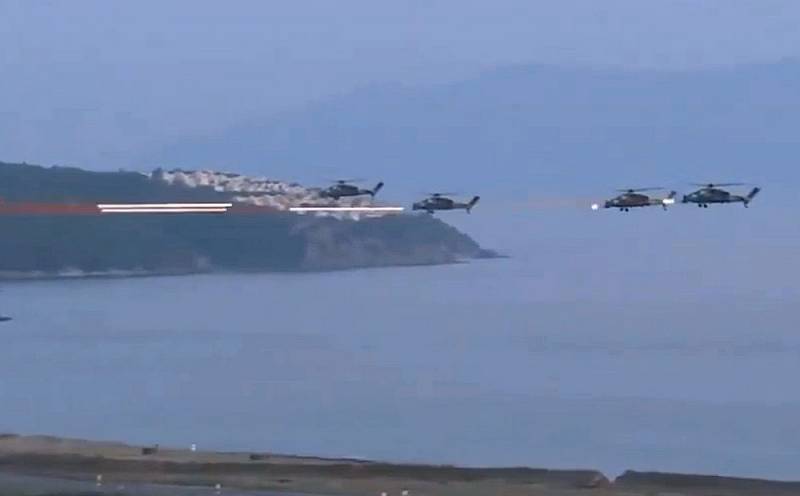 Footage of demonstration firing of Turkish T129 ATAK helicopters has attracted the attention of netizens. The video shows how a group of four helicopters flying from the sea, using aircraft cannons, hit a target on a hillside.


T129 ATAK is an attack helicopter capable of operating in all weather conditions. The combat vehicle, among other things, is armed with a 20-mm turret gun with 500 rounds of ammunition.

Spectacular, however ... And accuracy! At this distance, it's pretty good. Our Mi-24 has a very strong dispersion compared to the Turkish helicopter
Ivan Dmitrievich noted.

T129 was created in cooperation with the Italians, based on the Agusta A129 Mangusta. So by and large this is not a Turkish helicopter. Like "Bayraktar", assembled from parts from around the world
- said Alexey Komnik.

Gentlemen, well, this is a training ground, you don’t have to wait for an answer. In real combat, this will not happen - with such a formation and such speed, even the old Shilka will sweep them from the sky in one burst. Or a few soldiers with MANPADS
- rightly wrote Pavel Antonov.

Demonstration shooting is always spectacular. A helicopter is a commodity that is sold on the international arms market. Therefore, the more beautiful and brighter he shoots at the exhibition, the more chances he has
Vitaly Romanov echoes him.
Ctrl Enter
Noticed oshЫbku Highlight text and press. Ctrl + Enter
Reporterin Yandex News
Reporterin Yandex Zen
5 comments
Information
Dear reader, to leave comments on the publication, you must sign in.