Should we expect a civil war in the United States 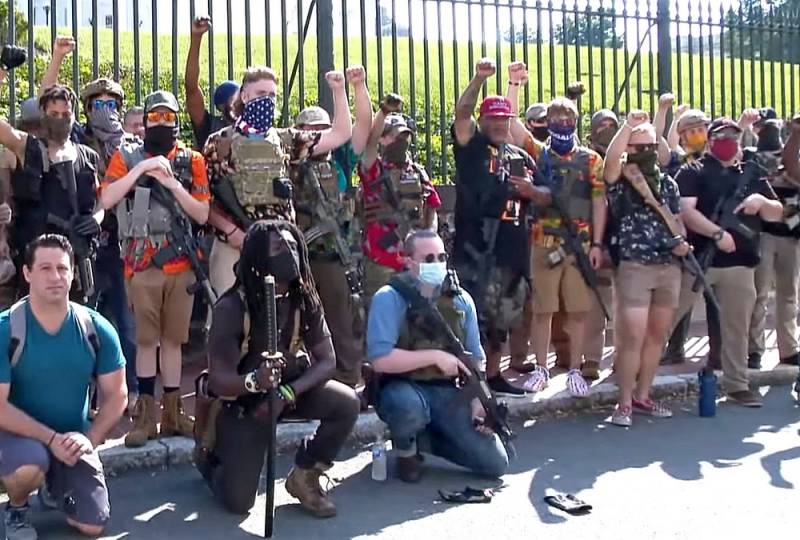 
From the latter, one can recall the recent presidential elections, when the internal political situation in the United States enjoyed extraordinary media attention in all countries. The information agenda was filled with BLM pogroms, mutual abuse of candidates, inter-party discord, armed ultra-right and ultra-left groups. A significant part of our Chinese and European observers claimed that the United States was on the verge of a civil war.

An impending political crisis is periodically predicted by some American analysts. In particular, before the elections there was talk that in the event of a defeat, neither Trump nor Biden would recognize the results and thereby plunge America into chaos.

However, as you know, nothing of the kind happened. In the same way as the growth of public debt, the annual approach to budget default, periodic stock market fever and the growth of separatist sentiments of the largest states do not lead to the collapse of the United States. Moreover, it cannot be said that all these factors are far-fetched or incorrectly ranked as destructive. They do express a tendency towards the destruction of the American state in its present form, but the reverse effect of the degree of stability of the political and economic US systems is higher. Centrifugal forces prevail over discord every time.

Civil War in the USA

It is clear that the prospect of the collapse of the United States is associated with a civil war, since the centralized state that has grown to an incredible size and the business community tightly soldered by Wall Street will bloodlessly collapse the country or change the political character of the state, no matter how this or that states, or these or other sections of society will not allow.

There are a lot of social groups that are openly hostile to each other in the United States both along purely political lines and along racial, ethnic, regional lines: Trump supporters and right-wing groups, antifa, BLM and leftists, liberals, rednecks, African Americans and Latinos, separatists ( Texans, Confederates, Aleuts, Hawaiians, Yes California, Lakota, Cascadia, South Carolina, Vermont, New Africa). They all have polar political views and an open hatred of each other and of the federal government. Some are well armed.

However, the degree of their contradictions cannot be considered sufficient to unleash a civil war even in conditions of an acute political crisis. Moreover, the presidential election was such a crisis (its peak was the seizure of the Capitol at the beginning of last year), the covid catastrophe became an acute social crisis, and the economic crisis in the United States has long been chronic. But at the same time, the federal government firmly holds power, and the centralized state systematically suppresses sporadic discontent.

The fact is that large social groups in the United States agree on one thing - they benefit from the retention of world hegemony by American capital. All of them are not against American messianism. Even the separatists are fighting for the independence of their states without destroying the existing economic ties, a significant part of which is tied to the external exploitation of poor countries and regions.

This shows a bizarre connection between the internal political life of America and its foreign policy. In the United States, unfortunately, there are no political forces that would directly admit that the Anglo-Saxon oligarchs, with the assistance of the middle class, built an empire that oppressed half the world. There is no political force that would want to put an end to American messianism and strive to build a peace-loving state.

Thus, the degree of contradiction of various social groups in the United States is significantly smoothed out in the economic field, they are ready to cut each other's throats for the profits that America receives through predatory policies, but do not even think about overthrowing this empire itself. The essence of the controversy between them is reduced to secondary issues and therefore remains within the framework of the existing system of power.

In addition, none of the leaders of numerous opposition groups is able to organize the broad masses, none of the ordinary oppositionists is ready to die for their convictions. There is no political force in the United States that could take and then hold power either in the country or in a separate state.

Tantrums are supported by the authorities themselves

At the same time, it is easy to see that the ruling circles in the United States and the media controlled by them are not at all averse to plunging the public into endless squabbles about racism, relations between the federal center and the states, the struggle of Democrats and Republicans, “Covid” and anti-vaxxers. On the contrary, they willingly inflate these secondary questions, translating their "discussion" into the category of uniform hysteria. It's all part of a big political show called American-style democracy.

The real American policy is expressed by the good old formula: "What's good for General Motors is good for America."

As long as American democracy works, the American "establishment" can sleep peacefully. Even if the leaders of the state lead the country into a dead end of the most severe crisis, nothing threatens the oligarchs. There will be a change of persons in power - no more.

Another thing is that in recent years the two-party system itself has been increasingly failing. She has worn herself down significantly in a hundred years, people are tired of starched Democrats and Republicans who swear in the “box” during the day and have dinner with their families in the evening. But this political environment can always be renewed by introducing additional parties, as was the case in other Western democracies. Moreover, every year the left and socialist sentiments are growing among the American youth, and right and conservative in the American middle class.

The American ship of domestic politics has long been bursting at the seams, but it keeps afloat because its crew is heavily brainwashed. Its members swear, fight, but they are not ready to scrap the ship. Too high a price paid by completely different people.
Ctrl Enter
Noticed oshЫbku Highlight text and press. Ctrl + Enter
Reporterin Yandex News
Reporterin Yandex Zen
21 comment
Information
Dear reader, to leave comments on the publication, you must sign in.