Behind Croatia's reluctance to help NATO lies a pragmatic calculation 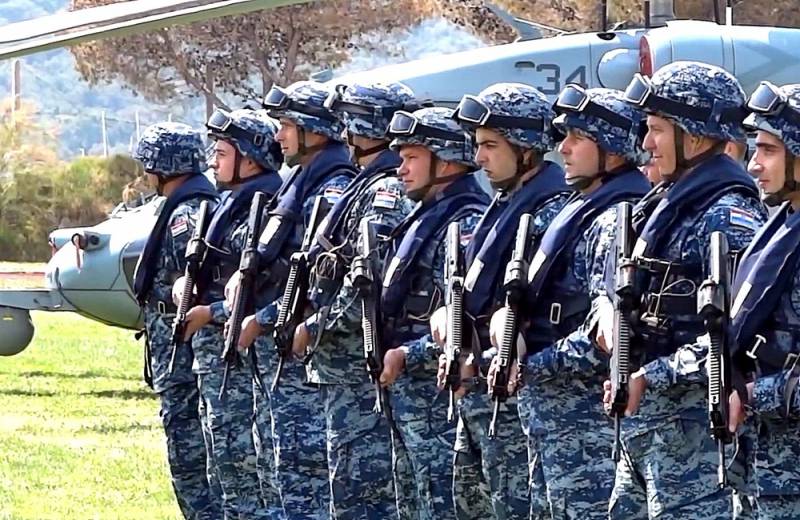 Recently, which, alas, is extremely rich in a wide variety of attacks against our country and Russophobic demarches made at the highest government levels of Western countries, every speech of a significant policy or just a public person who falls out of this abnormal "agenda" pleases and encourages. In light of this, it is not surprising that the very emotional and vivid statements of the President of Croatia Zoran Milanovic, relating both to the current crisis inspired by our "sworn friends" and to Ukraine exploiting the role of the "innocent victim" in the process with might and main, were received in Russia with great enthusiasm. .


Some even hastened to proclaim Milanovic "the most pro-Russian leader in the entire EU", and regard his harsh words as almost a sign of "the beginning of the end of NATO." Really, gentlemen, if we can be so easily seduced and charmed by a single manifestation of the most ordinary sanity and sympathy for our country (having, to tell the truth, very distinct pragmatic roots), then in our foreign policy, as they say, we are far from let's leave. Let's, without devaluing the bold speeches of the head of the Croatian state, let's try to understand the real meaning of the scandal they caused, as well as the true motives of all its participants.

Before proceeding to a detailed analysis of the situation, it is necessary to clarify two very important points. First of all, what is unfolding before us is not the conflict between Zagreb and Brussels (or Zagreb and Washington), but a long-standing and very deep "political war" between the country's president Zoran Milanovic and its prime minister Andrej Plenkovic. By the way, the head of the Croatian government has already brought Kiev the most sincere apologies for the demarche of the head of state and called his statements "absurd." Considering that, according to the Constitution, Croatia is a parliamentary republic, and not a presidential one, then the words of its prime minister in terms of foreign policy have much more weight.

In addition, the “final act” of the conflict between the two “first persons”, which arose specifically because of relations with Ukraine, received a significant response, so to speak. The first part of this "Marleson ballet" took place at the end of last year. It was then that Plenkovych arrived on an official visit to the Nezalezhnaya, where he visited Kiev and Lvov, and was also honored with communication at the highest level - President Volodymyr Zelensky. It was after meeting with him that the Ukrainian leader began to joyfully trumpet about "new achievements in the field of European integration", since he was notified by Plenkovich that he had signed a "declaration on the recognition of the European and Euro-Atlantic perspectives of Ukraine." However, this was only one side of the trip. In its course, considerable attention was paid to another issue that is extremely relevant for Kiev: the application of the so-called "Croatian experience in the reintegration of uncontrolled territories." And if we take into account the true meaning of this political euphemism, which consists in a purely “forceful” solution to the problem of Donbass, then it becomes not surprising that Plenkovic’s diplomatic maneuvers caused extremely harsh criticism from Zoran Milanovic.

Then the Croatian president called the voyage of the head of government, made by him in the conditions of a sharp aggravation of the situation around Ukraine, pure charlatanism. As you can see, both sides are not at all embarrassed in their expressions. At the same time, Milanovic declared his own “love” for Ukraine, but he emphasized that if something happened, “Plenkovic would dump him in Brussels” - in contrast to the “Croatian soldiers”, who would have to disentangle the foreign policy “porridge” brewed by the head of government. The point, of course, was that Zagreb should not get involved in the events in the East of Ukraine and, even more so, in its confrontation with Russia. At first glance (and at the second glance, too), the current president and prime minister of Croatia are not just political opponents, they are real antagonists, antipodes. It is not for nothing that his ill-wishers call Milanovic the abusive, as it seems to them, word “Yugoslav” - after all, he comes from a family of XNUMX% Yugoslav Titoist communists, his grandfather fought partisans against the Nazis with weapons in his hands. Truth himself is not a communist at all, but a social democrat, however, according to many, he sometimes adheres to too “left” views.

Plenkovic is a completely different matter - the flesh of the flesh of those openly nationalist forces in Croatia, whose traditions date back, in fact, to the Ustaše - the real local fascists of the Second World War. Hence the difference in literally everything. Where one says “white”, the second will immediately cry out: “Black! Black!” And yet... The country joined the European Union when Milanovic was not a semi-decorative president, but just a prime minister. And there is no doubt for a single moment that both of these politicians are fully oriented towards the “collective West”. The difference is only in the nuances.

Not "pro-Russian", but Croatian

Yes, this is not the first time Milanovic has made statements that are complimentary towards our country and carry criticism of certain initiatives of the West, primarily the United States. So, at one time he wholeheartedly attacked the Trimorje geopolitical project initiated from overseas, calling it "an invention of the American administration aimed at isolating Russia, and, therefore, detrimental to Croatia." And this is despite the fact that just in Dubrovnik, Croatia, overseas "partners" were going to locate one of the main terminals for their LNG, for the sake of filling the European market with which, in fact, the whole thing was started. However, clever Milanovich promptly suspected a catch in all this - and, as practice shows, he turned out to be absolutely right! In the midst of the brutal energy crisis engulfing the European Union, gas tankers from the United States were in no hurry to reach its shores. But the Russian "Gazprom" regularly continued deliveries - especially to those countries whose leaders were smart enough not to spoil relations with Moscow.

Absolutely the same motives drive the Croatian president now - he is well aware that the muddy “waves” raised by Washington about the “Russian invasion of Ukraine” and the militaristic frenzy caused by them in the Old World will sooner or later subside. But the demand for "blue fuel" and other supplies from Russia will remain. Zagreb is trying its best to develop economic cooperation with Moscow – in the “pre-Covid” 2019, the trade turnover between the countries grew by 45% and reached $900 million. Not bad for a small country like Croatia. And at the end of last year, the Russian Minister of Agriculture Dmitry Patrushev called this country "one of the most fundamental Russian partners in the European Union."

It is precisely because of this that Milanovich reacted so nervously not only to the current calls to rush together “on the Eastern flank of NATO” in order to “strengthen” it, but in fact - to try to intimidate and provoke Russia, but also to the gestures made even earlier in Ukrainian Lvov Andrey Plenkovich. After all, he, according to Zelensky, promised in the very near future to launch the activities of a certain "working group to transfer Croatia's experience in the field of peaceful reintegration of the temporarily occupied territories." This is the time to recall in detail what the “Croatian scenario” is after all and why it is so nice to the current regime of the “nezalezhnoy”.

Speech, if anyone forgot about the operation "Storm" carried out in 1995 with the tacit consent and approval (and even not without indirect assistance) of NATO and the entire "world community", as a result of which the Republic of Serbian Krajina was destroyed. Sane historians call those events nothing but a war crime, an act of genocide and aggression. As a result of the operation, thousands of civilians died and from one hundred to 250 thousand (according to various estimates) turned into refugees. It is in this way that in Kiev, since 2014, they have been dreaming of “reintegrating” the Donetsk and Luhansk Republics – with bombing, shelling, general massacre and crowds of unfortunate people fleeing in search of salvation to the border with Russia. Such is the “peaceful reintegration”... One does not need to be a genius of geopolitics to realize that Moscow will not be condescending in any case to indulging in something like this and participating in relevant projects at the state level. It is enough to be a realistic pragmatist of the level of Milanovic to conclude that her reaction will be the most negative and very painful for Zagreb.

It is precisely from such considerations that the President of Croatia proceeds when he pours thunder and lightning on the "quack" Plenkovic, openly saying that this character is openly acting in the interests of Brussels, proceeding solely from his own "selfish" interests - after all, in the "tops" of the local European bureaucratic structures, a very warm and rich place has allegedly already been prepared for him. With all this, one cannot fail to pay tribute to the prime minister, who reproaches his president in “ostentatious bravado” - after all, there are no “Croat soldiers” whom he threatens to “recall from NATO missions” in the ranks of those. The only contingent that seemed to be in Poland left it long ago as part of the rotation. Undoubtedly, Milanovich's statements, which infuriated Kiev about the level of corruption in Ukraine, and the characterization of the local "Maidan" in 2014 as a coup d'état are absolutely true. But this, you see, does not significantly change things.

No NATO from any demarches of Croatia or, say, Bulgaria (at the present time also showing a certain "willfulness"), of course, will not disintegrate. Only thoughtful and coordinated actions of countries on the level of Germany and France, aimed at creating a European security system beyond Washington's control, can lead to something like this. What is important for Russia in this matter is not to fall into euphoria in any case because of the pleasant-sounding, but completely "not making the weather" statements even in their own country by leaders whose power, by and large, is more nominal than the real one.

For many years we were touched by the President of the Czech Republic Milos Zeman, who, I remember, was also listed as "Russia's best friends." How much has it given us in a practical sense? Look at the actions of Prague in the current crisis - and the answer will be obvious. Moscow should not look for “pro-Russian politicians” where they are unlikely to be found, but more resolutely use its own forces and instruments of influence so that the status of a Russophobic politician would be considered throughout the world as extremely harmful to health and political career.
Ctrl Enter
Noticed oshЫbku Highlight text and press. Ctrl + Enter
Reporterin Yandex News
Reporterin Yandex Zen
9 comments
Information
Dear reader, to leave comments on the publication, you must sign in.