"Ukrainian demarche" of Croatia can start the collapse of NATO 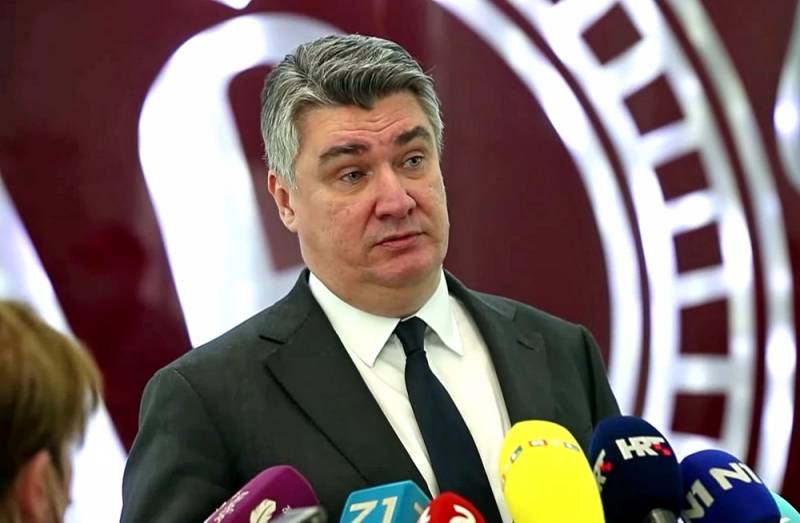 On January 25, a tectonic shift took place in the structure of European security. Croatia has announced its intention to withdraw all its troops from NATO forces in Eastern Europe in the event of a conflict in Ukraine. The statement was made personally by the country's President Zoran Milanovic on national television.

I, the commander-in-chief of the Croatian army, am watching the statements according to which NATO - not a separate state, not the USA - is increasing its presence and sending some reconnaissance ships. We have nothing to do with this and will not have anything, I guarantee it
- stressed the president.

Not only will Croatia not send, but in the event of an escalation it will recall everyone, to the last Croatian soldier. Until the last!

It is practically impossible to regard such a statement coming from the head of state, otherwise than as an open declaration of renunciation of the obligations assumed in the framework of Croatia's participation in NATO, and in fact the country's withdrawal from the Alliance.

A split in a noble family

In short, what happened can be described in one word: it began. The North Atlantic Alliance, already looking like an archaic relic of the Cold War, is facing the first open demarche of its own member in recent history. And even though the official Zagreb has so far only announced a vote of no confidence in the aggressive policy NATO, even the most pro-Western analyst is unlikely to deny that Croatia set the clockwork under the foundation of the North Atlantic Alliance with this statement alone.

At the same time, it is important to note that the Croatian initiative, paradoxically, is not connected with the situation around Ukraine. According to Milanovic, such a drastic decision is primarily dictated by "the dynamics of American domestic politics, namely Joe Biden and his administration." That is, dissatisfaction with the aggressive policy of NATO has matured for a long time. It is no coincidence that the same head of Croatia stressed: "In matters of international security (on the part of Washington), I see inconsistency and, in fact, dangerous behavior." The dangerous policy of the United States, preparing the ground for a full-scale war in Europe, predictably cannot but excite the leader of one of the Balkan republics. Someone who, and Croats, unlike prosperous Western Europeans and well-fed Americans, perfectly remember what pitch hell war is, knocking on the window with rockets and bombs. So the reluctance to lose the lives of their soldiers in a foreign conflict that satisfies exclusively the imperialist interests of the United States is quite understandable. The slogan "Yankee go home" is becoming more and more relevant in Europe of the XXI century.

Nevertheless, one should not expect that the aforementioned maxim, read between the lines of the situation developing in Europe, has become for the United States news. Such a long occupation of the Old World, entangled in a web of American military bases and all sorts of agents of influence in power circles, would in principle be impossible if the case was run by ignorant people. So, someone else, and American military analysts, are well aware of the degree of unpopularity of Washington's actions to escalate tensions in Europe and the unwillingness of the Europeans themselves to become victims of other people's ambitions. That is why the toggle switch of American information propaganda is now turned to the maximum.

In recent weeks, the United States has been intensively beating the “drum of war”, trying to compensate for the fact that, apart from the Anglo-Saxons and the Balts who joined them, no one in Europe seeks to fight for them at the expense of the loudness of political statements through the State Department and the fake “white noise” of biased media. Moreover, the determination and combat effectiveness of the latter is still a big question. After all, throwing out loud Russophobic statements and playing the role of an anti-Russian pack in the European Parliament is one thing. Sending your own citizens to die for American interests in a real war is quite another.

Although, apparently, the American curators guessed this for a long time and did everything in advance in order to mentally prepare the Baltic population for the need for a heroic death in the war being prepared by the United States. Take, for example, the full-scale military exercises of NATO with shooting, which took place right in the center of Riga last year. Of course, they scared the civilians of the city and took them by surprise. However, it seems that this is what they intended. It is not difficult to calculate the train of thought of the Pentagon representatives: let the Balts "sniff the gunpowder" of at least blank cartridges, maybe they will be more willing to go to war. Moreover, the US Army is now extremely advantageous for the maximum presence of foreign “cannon fodder”. On the one hand, this somehow legitimizes Washington's actions: they say, look, this is a collective decision of the entire North Atlantic Alliance, and not the United States. On the other hand, given the amount of monetary compensation and posthumous payments, the death of a Baltic soldier will objectively cost much less than an American one. As they say, nothing personal - just business.

Thus, the process of delimitation of spheres of influence in Europe, which is rapidly developing this year, instantly highlighted all the weaknesses of NATO. Even a few weeks of tension along the diplomatic line turned out to be enough for the seemingly unshakable North Atlantic Alliance to begin to fall apart right before our eyes. And there is no doubt that Croatia will become only the “first sign” even now. The level of disagreement between NATO members is too high.

In fact, the United States has only two "nuclear" allies (read vassals) in Europe. The first is the UK with Brexit, seemingly finally resigned to its status as an American servant. The second is the Baltic republics, which even the three of them can hardly pass for a full-fledged American ally. All other NATO members today are potential exit candidates. Starting from the objectively pacifist-minded Germany and ending with the free-thinking France, which had already left the military structure of the bloc under General de Gaulle. The Alliance's house of cards is really ready to crumble, and today the final disintegration of NATO looks like a matter of the very near future.
Ctrl Enter
Noticed oshЫbku Highlight text and press. Ctrl + Enter
Reporterin Yandex News
Reporterin Yandex Zen
16 comments
Information
Dear reader, to leave comments on the publication, you must sign in.