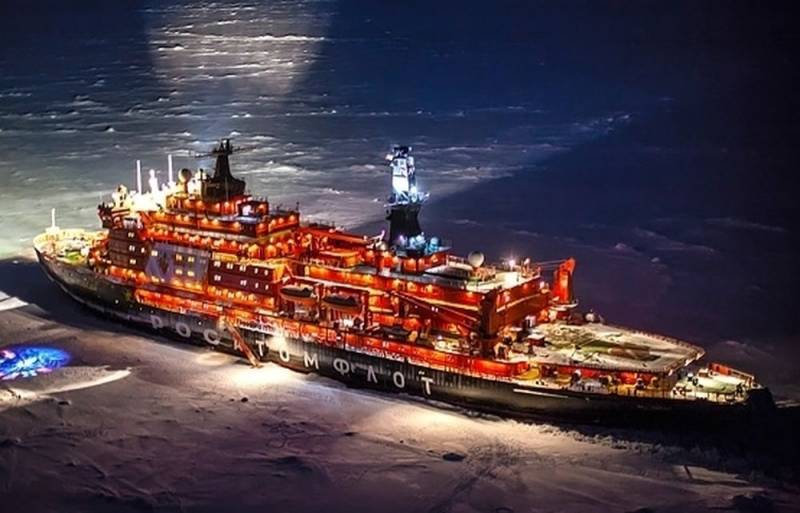 Russia's grandiose Arctic plan to expand the Northern Sea Route (NSR) has run into obstacles and could get stuck in the ice, writes the Russian-blocked Norwegian publication The Independent Barents Observer (IBO).


Moscow wants to start year-round transportation along the NSR as early as 2024 and reach 2025 million tons by 80. But this winter's experience shows that sea ice can derail those plans.

Dealing with the current situation is not easy. The vessels Inzhener Trubin, Yuri Arshenevsky, Polar King and Lev Yashin were trapped in ice, while the Arktika and Kapitan Dranitsyn rushed to their aid. Now the Arktika is leading the Yuri Arshenevsky through the Chukchi Sea. Behind them, at a distance of 200 km, "Captain Dranitsyn" is leading the cargo ship "Lev Yashin". Probably, in a few days the caravan will enter the Bering Sea of ​​the Pacific Ocean.

According to Russian ice maps, almost all of the Laptev Sea and the East Siberian Sea have an ice thickness of 30 cm, and in some places 2 meters. Near Wrangel Island, located between the East Siberian and Chukchi Seas, there is multi-year ice, and south of the New Siberian Islands there is a continuous strip of fast ice. The difficulty lies not in the thickness of the ice, but in the possibility of its compression. Northerly winds can push the pack ice towards the coast of Siberia, causing dangerous hummocks to appear - heaps of ice fragments.

After the departure of the Arktika from the port of Pevek, dry cargo ships Engineer Trubin and Polar King got stuck in the ice there. The Russians sent the Yamal nuclear-powered icebreaker there, which entered the East Siberian Sea on January 17.

Traffic in the eastern part of the NSR came to a halt in November after more than 20 ships were stranded there. Some of them were trapped in ice for several weeks.
- clarifies the publication.

At the end of December, Yamal escorted the cargo ship Pugnax to Murmansk. Until the end of January, the Audax cargo ship and the Vladimir Vize gas carrier (LNG tanker) were supposed to escort along the NSR. But on January 17, both ships turned around and, apparently, changed their minds about entering the ice. Soon they may be joined by the nuclear-powered container ship Sevmorput, which left Vladivostok on January 17, planning to pass through the NSR to Murmansk.

The critical situation is unlikely to worsen further. But the current situation shows that Moscow's ambitions for year-round transit navigation along the NSR will face difficulties, despite the construction of three more, and possibly five nuclear-powered ships of Project 22220 of the Arktika type (LK-60Ya)
- summed up the media.
Ctrl Enter
Noticed oshЫbku Highlight text and press. Ctrl + Enter
Reporterin Yandex News
Reporterin Yandex Zen
16 comments
Information
Dear reader, to leave comments on the publication, you must sign in.