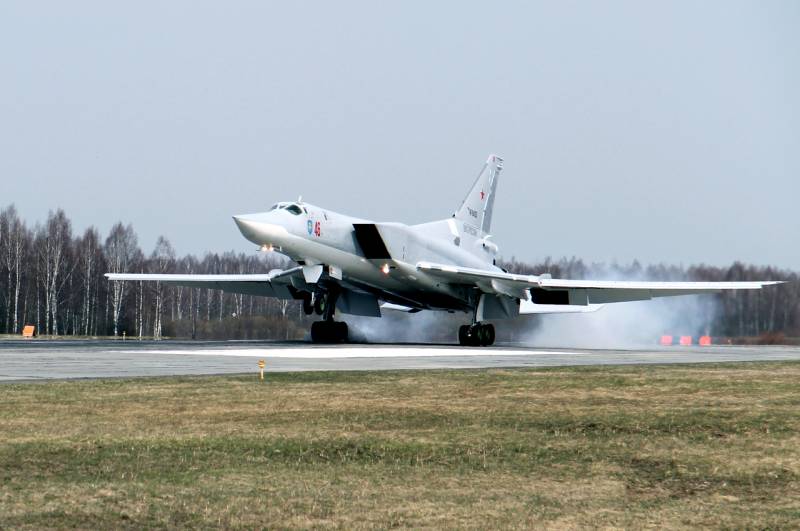 Today, when the Kremlin first moved to a direct and open confrontation with the West, everyone is wondering what the militarytechnical Russia's response to the United States and NATO as a whole. The prospect of deploying our military bases somewhere in Cuba or Venezuela is being actively discussed, which supposedly should serve to deter the aggression of the “hegemon”. But perhaps there are other, more reliable and effective means?


In fact, there are many more Russian bases in the Caribbean that need not only to be built, but also to be guarded and regularly supplied. The Pentagon would be impressed if the Ministry of Defense of the Russian Federation could give a hard blow to the “long arm” of the United States, which is their most powerful navy, and also reach out to the territory of the “hegemon” itself, which requires very strong aviation, Naval and Far.

It is customary to stubbornly call our country exclusively “the great land” and prepare to repel tank wedges advancing from the west, while the real threat to the very existence of Russia comes from the sea, from American strategic nuclear submarines lurking there with Trident-2 ICBMs on board and aircraft carrier strike groups covering them. To effectively counter the AUG and successfully hunt enemy submarines, you need your own powerful aircraft carrier fleet, numerous anti-submarine aircraft and hunter submarines, but we do not have all this and, unfortunately, are not expected in the near future. The minimum program is to protect at least its coast from the US Navy and the NATO bloc as a whole, and to be able to "snap" hard.

This requires numerous naval aviation, equipped with modern aircraft. Alas, today it is in decline. The 43rd Separate Naval Assault Aviation Regiment was preserved in the Black Sea, and the 4th Separate Guards Assault Aviation Regiment was preserved in the Baltic Sea. They are armed with multifunctional Su-30SM fighters and already frankly outdated Su-24M bombers. Naval missile-carrying aviation, which really posed a threat to the American AUGs, was eliminated as a class during the Serdyukov reforms, and all of its Tu-22M3 supersonic bombers were transferred to Long-Range Aviation. Of course, one can be glad for the Russian Aerospace Forces, but for Naval Aviation this was a severe blow, from which it still has not been able to recover.

Undoubtedly, the attempt of the RF Ministry of Defense to create a special “weakened” version of the Su-30SM fighter can be considered a positive step. This is a 4+ generation aircraft designed to gain air supremacy. The American edition of Military Watch even flattered him, calling him one of the 6 most formidable fighters in Europe, which is capable of hitting targets at a distance of up to 400 kilometers:

The squadron of Su-30SM fighters, supplied by Russia to Belarus since 2019, provides the country's Air Force with the heaviest and longest-range fighter in Europe... The Su-30SM is the only modern fighter on the European continent that has repeatedly participated in air battles.
The Russian Ministry of Defense intends to improve the combat qualities of the aircraft in the Su-30SM2 version, which will receive powerful advanced AL-41F-1S engines from the Su-35S fighter, as well as a more powerful radar, presumably the Irbis radar. What is important for naval aviation is that the updated fighter will be able to strike enemy surface ships with two types of missiles - the supersonic Kh-31 and the subsonic Kh-35. It is reported that 46 modernized Su-30SM2s have been ordered for Naval Aviation, and 4 aircraft have already entered the Baltic Fleet.

The dynamics, as doctors say, has been positive, but there is a lot of work ahead. The updated Su-30SM2 fighter will significantly increase the ability of the Baltics and Black Seas to cover their coasts, but Russia is a country of exceptional size and coastline. Will 46 aircraft be enough for Naval Aviation?

It should be recalled that before the controversial reforms of Minister of Defense Serdyukov, Tu-22M3 bombers formed the basis of the Naval Missile-Carrying Aviation of the Russian Navy. These are long-range supersonic missile carriers with variable sweep wings capable of carrying nuclear weapons. In addition, the Tu-22M3 can carry all types of air-launched cruise missiles: Kh-55, Kh-555, Kh-32, Kh-101/102, as well as promising ones - Kinzhal, GZUR and Kh-50. Even in the Soviet period, this aircraft was quite deservedly called the "killer of aircraft carriers", and even the "Eurostrategist", which allowed it to strike at targets in Europe. The presence of a special rod made it possible for the missile carrier to refuel in the air, which de facto turned it into a strategic one. For this reason, under the START treaty, the rod and pipelines had to be dismantled, but they were returned a few years ago.

The supersonic Tu-22M3 is an excellent platform for the needs of both long-range and naval missile-carrying aviation. The problem is that there are not many of them left, and production has been discontinued. It got to the point that I had to finish building four airframes that had been standing for decades in the open air at the site of the Kazan Aviation Plant in order to bring them up to the level of the Tu-22M3M. A natural question arises, if in our country they were able to resume the production of the Tu-160M2 "White Swan", then why not do the same with the Tu-22M3M?

The idea is quite tempting, since it would completely cover all the needs of Long-Range and Naval Aviation, pumping up the “far hand”. If Russia had several hundred such supersonic missile carriers in service instead of several dozen, distributed over the fleets and airfields of the Russian Aerospace Forces, this would be a truly impressive response to the NATO bloc. However, the resumption of production will rest in the absence of a power plant. The production of the Tu-22M2 and the NK-25 engine for it, at the request of the Americans, has long been discontinued, the equipment has been dismantled. Renovation of existing missile carriers had to be done by purchasing used aircraft engines and components for them in Ukraine at one time. The resumption of production of the obsolete NK-25 can hardly be considered appropriate.

However, it seems quite promising to install on Tu-22M3M supersonic bombers in an upgraded version of the NK-32-02 power plant, which is now used on the updated Tu-160M2 White Swan, which will seriously increase the performance characteristics of the Russian missile carrier.
Ctrl Enter
Noticed oshЫbku Highlight text and press. Ctrl + Enter
Reporterin Yandex News
Reporterin Yandex Zen
81 comment
Information
Dear reader, to leave comments on the publication, you must sign in.