Brussels was gripped by riots: what drives the pogromists? 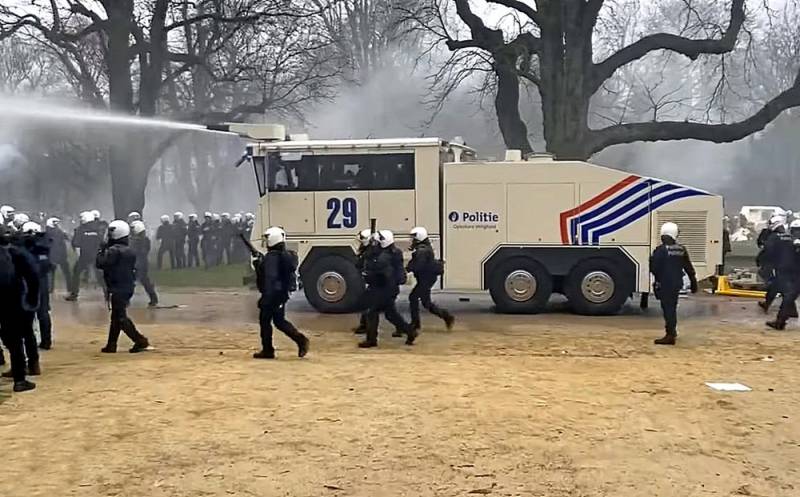 Brussels is once again on fire, 70 Europeans actively protested against the anti-COVID measures, processions and demonstrations quickly turned into clashes with the police and pogroms.


For a long time in our press, which is largely controlled by people of liberal and pro-Western views, almost no attention was paid to such an important factor. political life of Western Europe, like mass pogroms. Russians are usually unaware that all Western European capitals blaze several times a year with large-scale clashes with the police, robberies and senseless riots. There is not a single human rights organization that collects statistics on European pogroms, works to support the protesters and trumpets about brutal violence against the people. This is not some kind of color revolution, "this is different, you need to understand."


The situation began to change somewhat after the widespread coverage of the movement of yellow vests. Our people learned that, it turns out, in a prosperous and well-fed Europe, there are millions of dissatisfied inhabitants who, on occasion, are not averse to burning a police Peugeot, fighting with local “cosmonauts”, looting a store with smartphones and breaking an ATM. So there is no need to strictly judge the Kazakhs, they are great Europeans in this regard.

In reality, the mass protest pogrom is an important factor in the political life of European peoples. "Decent" and "well-mannered" Europeans hate their police much more than we do. And these are not the intrigues of migrants who have come in large numbers, although they are actively participating in the riots, boldly adopting the “European culture of protest”. In Belgium, people have come out against mandatory vaccination for visiting taverns, that is, they are not migrants, but obese indigenous philistines who are prevented from relaxing in the evenings.

The fact is that the peoples of Europe have a rich history of revolutionary struggle against their governments. In European countries, there are strong trade unions, a powerful labor movement, strikes and strikes for any reason are common. At a certain moment, those in power realized the high efficiency of the pogrom Gaponism, that any discontent of the people can be quickly directed along the path of senseless violence. This only requires two things. First: to equip law enforcement agencies with a rich arsenal of special equipment for street fighting with protesters, to train personnel to fight workers and clerks, to embitter and motivate them. Second: to create a culture of violence and radicalization of discontent. Pay attention to how the Western press carefully and with what a romantic mood publishes photos of fights with the police, burning cars, broken windows and gutted ATMs. And it doesn't matter where in the world. How many films and serials have been made on the subject of a violent struggle for one's rights and freedoms, and not about the seizure of power, an armed uprising against the authorities, but about pogroms and riots. Not the last role in the formation of this culture was played by reports from the Ukrainian Maidan.

Surprisingly, provoking dissatisfied people to pogrom and rebellion plays into the hands of the current governments, since all the activity of people, firstly, goes into the whistle of "clashes" with the police, and secondly, it loses at least some constructive direction and organization. European bosses, who have insured and reinsured all shop windows, ATMs and cars, sit, drinking expensive wine, and watch how on weekends some tramps (protesters) beat other tramps (policemen) for fun. And on Monday, all bruised dutifully go to work.

They say Western democracy is built on the principle of checks and balances. So, the European (and American, of course) pogrom is a reliable "restraint" on the political activity of the broad masses.

What drives the rioters?

Ordinary people are languishing under the yoke of high prices, mortgages, loans, low wages, bad medicine and unemployment. They constantly feel the injustice of the market distribution, when all the national wealth is occupied by large corporations, bribing politicians in packs. Seeing no alternative, without organization, with brains obscured by political myths and conspiracy theories, driven by burning emotions of indignation, they pour out onto the central streets of cities. Roughly speaking, Western societies torn apart by social contradictions are permanently in a state of cold civil war. In appearance, law-abiding people, but as soon as another drop overflows the cup of patience, an explosion occurs. Calm in appearance on weekdays, the capital plunges into the chaos of a pogrom on weekends.

The bottom line is that people understand the futility of forcing the government to satisfy their demands by peaceful means (and often the impossibility of this within the framework of such a society), but do not understand how to change the very system of power and society.

Pogromists, robbers, fighters on emotions are trying to somehow compensate for the injustice of the social system. And this system is already ready for their pogrom activity. Just like in the plot of "The Matrix" - the love of freedom of a person is calculated by the machine and his struggle is strictly localized without prejudice to the architecture of the world order.

A pogrom and rebellious Europe began to take shape around the spring of 1968. It was the lessons of 1968 that showed the ruling strata in European countries, and later the American "establishment", that the violent radicalization of the mass movement should not be feared, on the contrary, it should be romanticized. No matter how much you beat the police, or burn cars, or smash shop windows, power will remain in the hands of financial magnates. And they can change the government and the president at any time, this is democracy, there are always safety nets.

No matter how painful it is to admit to all sympathizers of mass protests, to everyone who considers the demands of the protesters fair, and their anger justified, but the participants in the riots and pogroms are political boobies. They are fooled over and over again, allowing them to painlessly vent their aggression.

It is said that Western democracy is the best possible form of government. This whole story with repeated pogroms perfectly shows the duplicity and cunning of Western-style democracy, the desire to hush up contradictions, to extinguish the indignation of a significant part of society. And everyone consistently performs their “civil functions”: the press “objectively” covers, the authorities “restore law and order”, and the protesters satisfy their urges in the most base ways. But when the ideologists of Western democracy cite European countries as a model, they always "forget" about the systematic European and American pogroms.
Ctrl Enter
Noticed oshЫbku Highlight text and press. Ctrl + Enter
Reporterin Yandex News
Reporterin Yandex Zen
14 comments
Information
Dear reader, to leave comments on the publication, you must sign in.