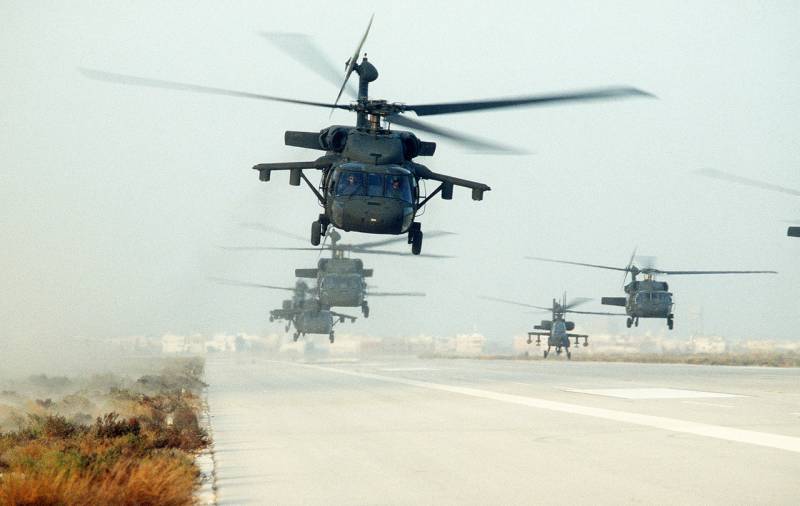 At the beginning of the previous week, on January 17, the anniversary of Desert Storm, or, as the Americans call it, the first phase of the Gulf War, flashed by completely unnoticed. Indeed, 31 years is not a round date, and besides, now humanity has enough worries with other wars and conflicts, both real and fictional. What is there to remember “things of bygone days” ... And, nevertheless, it was precisely the military operation launched by the United States and its allies more than three decades ago, seemingly with exceptionally good intentions, and even under a UN mandate, as once and became the starting point of all those numerous problems that today face the whole world, and, first of all, our country.


Yes, yes – it all started right then, with the “liberation of Kuwait”, and not with the invasion of Iraq in 2003 and not with the bombing of Belgrade in 1999. And the "unipolar world", and Washington in the role of the "world gendarme", and the United Nations in the role of his humble accomplice. Equally legitimate would be the assertion that it was Desert Storm that became for the United States the factor that predetermined its geopolitical and military strategy, as well as the vector of development of the American army for decades to come. In order to fully understand this, it is necessary to recall both the main “outlines” of the events of early 1991 and their background, as well as some points that were not advertised then and are rarely mentioned today.

Let's not try to find immutable truths in the most complex historical, tribal, religious and other intricacies of the Middle East, in which whole legions of hell can break a leg. Let's assume that the invasion of the Iraqi army into neighboring Kuwait really was what it was declared from the high rostrum of the UN - shameless aggression, annexation and the most brazen occupation. In any case, all this does not negate the fact that both Saddam Hussein himself and his state, not only to a large extent, but in the very first place, were precisely the creations, the beloved offspring of the Western world. The same USA in every way supported and encouraged this character and all of his, frankly, far from unambiguous actions. Saddam was forgiven both the cruelest suppression of any dissent, and the notorious "ethnic cleansing", the eyes of which the "world community" opened their eyes only when a pretext was needed to overthrow the "regime".

All this was done for one thing - to use it as a "counterweight" and the main force against the "Muslim fanatics from Iran." By the way, the Iran-Iraq war, which lasted for eight years and caused irreparable damage to both states, was most thoroughly inflated not only by the West, but also by the Arab East. Everyone had different motives - from banal earnings on the supply of weapons to the desire to eliminate competitors from the oil market. In fairness, it should also be mentioned that Hussein also received some support from the USSR, which was already in the last stages of degeneration and decay of the USSR (at least - weapons). At the same time, his reprisals against the Iraqi communists somehow "fell" out of sight of the Politburo of the Central Committee of the CPSU.

It must be said that by the beginning of the Gulf War, Baghdad's debt to the Soviet Union was about 10 billion dollars. However, this impressive figure, and even a loan of 24 billion dollars made from "Western partners" (primarily Americans), paled before the loans that were provided to Hussein by his closest neighbors - Kuwait and Saudi Arabia. There it was about 50-60 billion dollars, which the lenders were not averse to returning quickly. If we talk about a complex combination of geopolitical, economic and the strategic factors that led to the outbreak of the Gulf War, it is easy to conclude that it was almost inevitable. Saddam Hussein, thinking in the spirit of "brothers", reasoned that it is much easier to "bang" a creditor than to pay him off. In addition, he was sure that the United States, which was interested in him as in "its scoundrel", some kind of overseer in the Middle East, would not interfere in the fight. And if they intervene, their antagonist, the Soviet Union, will help. The Middle Eastern sheikhs and other monarchs did not need Hussein, who had made peace with Tehran, but had a huge army “under arms” and continued to look around with bad interest.

The Americans, who had won their main war, the Cold War, and felt like the rulers of the world without five seconds, itched to make their debut in this capacity. Well, at the same time, to test the latest models of weapons in practice, and even so that the whole world is finally and irrevocably convinced of their "coolness". I wouldn't discount the version that in this way Washington "just in case" wanted to teach a substantive lesson to Moscow regarding its own military might. No wonder that "Desert Storm" became the first war-TV show in history.

"Brave New World" against the backdrop of oil fires

During this campaign, the United States successfully tested and “tested” not only the latest models of “smart” high-precision weapons (which, at 8% of use, accounted for 85% of military costs) such as Tomahawk cruise missiles, HARM anti-radar missiles, Mk-117 bombs and BLU -109B, new tanks, aircraft, infantry fighting vehicles, communication and command and control systems. No, the scale here was completely different: the United States for the first time created a military coalition under a UN mandate, by the way, having managed to attract Arab countries into its ranks against another Arab country. Subsequently, the “fig sheet” of UN powers will be discarded by the Americans, the precedent of “Desert Storm” will allow them to carry out similar military measures according to a well-established scenario, without any “approvals” there. In 1991, it was extremely important, first of all, that the Soviet Union for the first time did not traditionally oppose "a new act of aggression by world imperialism."

Moreover, he most actively supported the newly acquired "Western partners". It is not surprising that yesterday's members of the Warsaw Pact Organization rushed headlong into the ranks of the American coalition, racing to curry favor with those who, not without good reason, were seen as the new masters of the world. After that, it was possible to put a final cross on the USSR as a superpower - which was done very soon by the "partners" who believed in their absolute superiority over us. Specifically, from the Middle East, where the Soviet influence and presence (including the military) have traditionally been extremely high, we "flew out" for many, many years. When Moscow tried to object to something there in 2003, they simply brushed it aside, no longer considering it necessary to observe even the appearance of decorum. It was only during the recent Syrian campaign that Russia managed to truly correct this colossal geopolitical failure and fully return to the region.

Another major consequence of the Gulf War was the principle that it doesn't matter what happens, what matters is how CNN shows it. It was it that was rightly called the “first television war”, during which the necessary public opinion was created by the television channels of one of the warring parties, leaving the opponents no chance to convey their truth to anyone. Subsequently, a lot of evidence was collected that American journalists, despite all the assurances of their "impartiality" and "objectivity", were under the most severe control of the authorities (and, first of all, the Pentagon) while covering the hostilities. It also became known that they launched a great many fakes into the information space, which made it possible to turn that war into the most powerful PR campaign of the United States, which finally washed off the shame of Vietnam. However, who cared about it - then? Women and children bombed in Baghdad by "smart" bombs? In fact, it was in the process of preparing and conducting the "Gulf War" that the United States created and worked out a total mechanism for duping the "world community" in its own interests.

Then the machine of conducting information wars began to work (and more than successfully), promoting exactly the agenda that is currently beneficial to them. Since then, they, in fact, have arrogated to themselves the indisputable right to possess the absolute truth in the last instance, even if it is based on "highly like" or, in general, outright falsification. The notorious “Colin Powell test tube”, the “ethnic cleansing” of Slobodan Milosevic, the death of Gaddafi, two decades of Afghan darkness and horror - all this originates precisely on January 17, 1991.

Today, literally before our eyes, the United States is trying to "twist" all the same "movie" - only with "Russian troops concentrated to invade Ukraine." Their incredibly cynical arrogance, confidence in their right to single-handedly make decisions about the fate of entire countries and peoples, and all over the globe – these are the main consequences of the “Desert Storm” that our country is forced to deal with today. It was then and later, against the backdrop of burning oil fires, that the very “beautiful new world” was laid, into which the Americans literally dragged everyone at gunpoint, and from which they are now categorically not going to let go.

It is also impossible to keep silent about the fact that the “stunning success” of Operation Desert Storm and the Iraqi campaign of 2003 that followed it played very cruel jokes on the Americans themselves. First of all, this was one of the reasons why, having dealt with the USSR, they brought Russia into the category of "third world countries" that forever lost the right to any interests and claims of a geopolitical scale. In addition, it was then (as well as during some other wars, where the US Army was confronted by an enemy equipped with Soviet weapons and technique), the Americans firmly believed that any Soviet (as well as Russian) weapons are “obsolete”, “rusty” and completely useless. In any case, they cannot be compared with the “most advanced” samples produced in the USA itself. Hence - and extremely unpleasant surprises with the "Vanguards", "Zircons" and everything else.

And, by the way, the excessive enthusiasm for the “non-contact war” that emerged just then, during which at least 90% of success is achievable through air strikes, led to serious “distortions” in the military construction of the Pentagon, which they began to recognize and try to correct there, only now. However, this is a topic for a completely different conversation. Today we should remember "Desert Storm", first of all, as the start of the geopolitical restructuring of the whole world, the beginning of that "dark era", the end of which Russia is currently trying to put an end to. I would like to believe that this can be done peacefully.
Ctrl Enter
Noticed oshЫbku Highlight text and press. Ctrl + Enter
Reporterin Yandex News
Reporterin Yandex Zen
2 comments
Information
Dear reader, to leave comments on the publication, you must sign in.