Cuba, Syria or Odessa: what is the purpose of the Russian BDK campaign 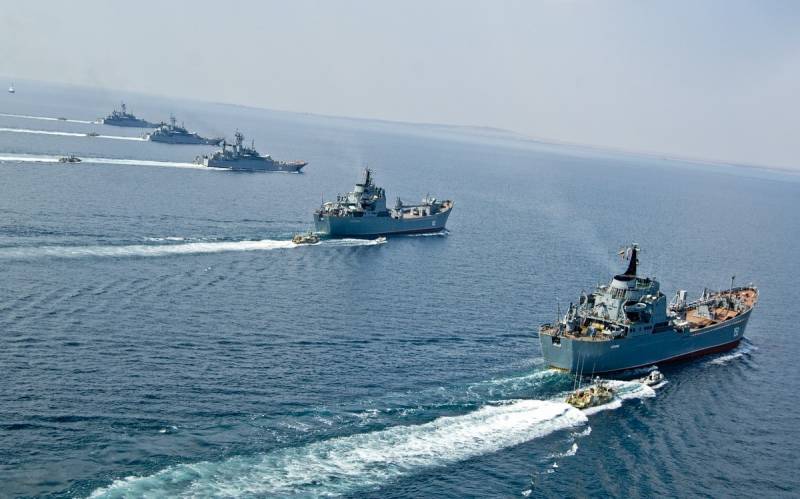 One of the most important intrigues of recent days is the maneuvers undertaken by the large landing ships of the Northern and Baltic fleets of the Russian Federation. Three Baltic BDKs of Project 775, Kaliningrad, Minsk and Korolev, as well as two BDKs of the same project, Olenegorsky Miner and George the Pobedonosets, and one BDK of the modern Project 11771 Pyotr Morgunov of the Severomorsk sailors left their bases, linked up and moved together towards Gibraltar. Such a large-scale campaign of Russian landing ships attracted the closest attention and gave rise to many theories and conjectures.


The main intrigue is where six large landing ships of the Russian Navy go at once, why without escort ships and what they have in their holds.

Recall that the project 775 large landing ship is capable of transporting 10 medium tanks and 340 marines at a time, or 12 armored vehicles and 340 marines, or 3 medium tanks, 3 self-propelled guns 2S9 Nona-S, 5 MT-LB, 4 trucks and 313 marines . BDK project 11711 type "Ivan Gren", about which we told recently, they can transport either 13 main battle tanks, 36 infantry fighting vehicles or armored personnel carriers, 30 trucks, or up to 300 marines at a time. Numerous photographs show that the ships are heavily loaded. So what are they taking and where?

The first suggestion was that a flotilla of six large landing craft was heading for the Caribbean. Ideas were expressed that in the holds of the BDK instead of armored vehicles and paratroopers there are, if not medium-range nuclear missiles, then at least the Iskander-M OTRK. Cuba, Venezuela and Nicaragua were named as the final destination.

As for Cuba, the deployment of Soviet and Russian missiles on the Island of Freedom is prohibited by an agreement with the United States, which was signed after the end of the Caribbean Crisis. The situation would be different if the Iskanders, Bastions and modern air defense systems were sold to Havana for its own needs. Alternatively, among the cargo in the holds of the BDK, there may be the Iskander-M OTRK of the 152nd Guards Missile Brigade, stationed in the city of Chernyakhovsk, Kaliningrad Region. To train the Cuban army to operate such high-tech weapons Moscow could to provide their instructors and military specialists, de facto having received a “base without a base” in the Caribbean.

Approximately the same trick could be done with Venezuela or Nicaragua. The media drew their attention to the fact that on the eve of the landing of the large landing ship at sea, President Putin had a long and fruitful conversation with his Nicaraguan counterpart Ortega. However, Project 775 BDKs are not very suitable for ocean crossings. For some reason, tankers with fuel and escort warships were not assigned to the "paratroopers" on such a long trip, if we assume that the Iskanders were the cargo. Unclear.

If, however, a flotilla of six large landing ships turns towards Gibraltar and enters the Mediterranean basin, then the matter will take on a slightly different character. Most likely, they will call at the port of Tartus, where the Russian naval base is located. It should be noted that on January 15, the BDK of project 1177 "Orsk" of the Black Sea Fleet of the Russian Federation entered the same place, presumably, not empty.

That is, almost simultaneously, 7 large landing craft from three Russian fleets will be in Syria at once, which together can transport at least two hundred units of various combat equipment. It is possible that the activation of the "Syrian Express" may be associated with the need for a large-scale military operation in the north of the SAR. A “small and victorious” war against terrorists in Idlib may turn out to be an additional argument in the course of negotiations between Moscow and Washington over the future of Ukraine and Georgia.

The next most popular for the Caribbean Sea is the version about the participation of a flotilla of 6-7 (with Orsk) Russian large landing ships in a landing operation against the Black Sea coast of Ukraine.

The past 8 years of doing nothing have led to the fact that in Nezalezhnaya it is absolutely possible that elements of the American Aegis dual-use missile defense system will appear, where anti-aircraft missiles are easily replaced within a day by Tomahawk attack cruise missiles capable of carrying nuclear warheads. Alternatively, near Kharkov and Zaporozhye, American medium-range nuclear missiles and promising hypersonic missiles, against which Russia does not have an effective missile defense system at all, can be deployed directly. Such scenarios pose a real threat to the very existence of our country, since the temptation to launch a preemptive strike at the Pentagon may become too great.

The amphibious landing operation of the Russian Navy in the Black Sea with the liberation of Odessa and breaking through the land corridor to the isolated Transnistria is possible as an integral part of a full-scale land operation with the rapid advance and coverage of large Ukrainian cities by the RF Armed Forces for the subsequent elimination of militants and punishers of the pro-Western puppet regime. In total, there will be 13 large landing ships on the Black Sea with the Baltics and North Seas. If their goal is the liberation of Novorossia, then, of course, they are not carrying any Iskanders in the holds, but they will take on board the Russian marines.

However, about a year ago the situation was similar, and no war happened.
Ctrl Enter
Noticed oshЫbku Highlight text and press. Ctrl + Enter
Reporterin Yandex News
Reporterin Yandex Zen
13 comments
Information
Dear reader, to leave comments on the publication, you must sign in.