Forcing Kiev to "Minsk-2" will not be a victory, but a defeat for Russia 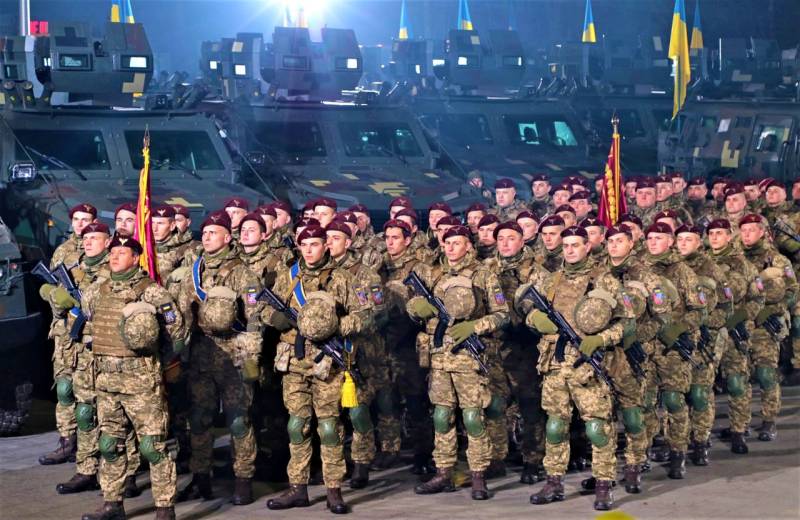 The visit of US Secretary of State Anthony Blinken to Kyiv the day before can hardly be called a bright event. The vast majority of statements made by a high-ranking American official, both in the course of his communication with the leadership of the “nezalezhnaya” and after it, do not shine with novelty at all. All the same familiar, worn-out phrases, assurances, promises and threats. And, perhaps, this visit would not have been worth attention at all if it had not taken place at the very time when the “Ukrainian issue” came to the fore in relations between the United States and its NATO allies with Russia. In light of this, the head of the State Department, of course, visited the "forefront" of the ongoing global political and diplomatic confrontation.


So far, among the various versions explaining his appearance in the Ukrainian capital (which, by the way, was unplanned and even unexpected somewhere), the prevailing ideas are that the chief US diplomat granted to not too predictable and adequate "allies" in order to put them before the fact of the need to fulfill, finally, the agreements known as "Minsk-2". To what extent can this be true, and is it worth considering such a turn of events as a victory for our country in the complex and multifaceted process of resolving the situation not only in Donbas, but also with Ukrainian-Russian relations as such, which has been going on for almost eight years now?

Why the Minsk Agreements are beneficial to the United States

As a matter of fact, as mentioned above, Blinken did not say anything extraordinary in Kiev. Again "unbreakable support for Ukraine" and "Putin's readiness to launch an invasion as soon as possible." Again shifting responsibility for the situation to our country, promises to make it “pay a big price in case of aggressive actions”, “horror stories” about future sanctions and “a sharp increase in military support” for Kiev. Well, and, of course, a peculiar blah blah blah about the implementation of some kind of "reforms" in the "nezalezhnaya". All this is "water" and idle talk in their purest form, of course. Of the intriguing moments of the visit, it is worth mentioning that Blinken's communication with Dmitry Kuleba, during which they were photographed against the background of the schizophrenic "map of Ukraine", where this "superpower" extends over a fair amount of Russian territories - Kuban, Bryansk, Voronezh, Kursk regions and not only .

By the way, in Belarus, Poland and Romania, the “brave Ukrainians” also cut their countrymen on this “masterpiece”. The statement of the head of the Ukrainian Foreign Ministry after that that Kiev “does not plan any offensive operations, but only works to strengthen its security” sounds either like buffoonery or like an outright mockery. Blinken, of course, such nuances did not bother much. However, this, again, is a lyric. If we talk about really significant words, then these, of course, should include the statements of the head of the State Department on two occasions. Firstly, that Sergey Lavrov will not receive any "written answers to security proposals", contrary to the demands put forward, in Geneva. Secondly, Mr. Blinken, rather unexpectedly for the host side, spoke in support of the Minsk Agreements, stating that they should not be changed, but implemented.

Before recording the Secretary of State as an “agent of the Kremlin”, who for no reason began to support the “narratives” coming from there, one should think about how interested the American side might be in implementing the agreements signed in the capital of Belarus on February 12, 2015. The full text of this, in general, a small document is publicly available, so I will not retell, I will focus only on the main points. Yes, the text of the second “Minsk” mentions an amnesty for the defenders of the Republics, the transfer of the border to Ukraine only after the elections and the vaguely designated “comprehensive political settlement”, as well as the promise to the current DNR and LNR after their entry into the “non-state” some kind of “special status” or or "autonomy".

And now let's, hand on heart, honestly answer the question: is there anything in all these points that prevents Kiev (under the strict guidance of Washington) after their formal execution from "replaying" the situation "in the most fundamental way? Creation by local authorities of detachments of "people's militia"? Don't be ridiculous - do you yourself believe in such a thing? Even if we hypothetically assume that they will be formed, then it will not be difficult for, as they say, "specially trained people" to neutralize them armed with a maximum of light small arms. The main thing in this whole scheme (if we discard the verbal "husk" with which it is abundantly covered) is that Donetsk and Lugansk, after the formal implementation of Minsk, will be in the complete power of Kiev. Well, and its overseas owners, of course. And at the same time, Washington will receive absolutely all the rights to yell from every rostrum: “Ukraine “Minsk” has fulfilled! And everything that happens in the Donbas after that is its purely internal affair!” Inner, inner, inner!

Why the Minsk Agreements are unprofitable for Russia

Thus, Moscow will lose the last opportunity to fend off accusations of “interference in Ukrainian affairs” with counter-reproaches that “Kyiv does not want to follow the path of a peaceful settlement of the conflict”, referring to all the same “Minsk” papers, if they are thrice wrong. If someone still believes that after their "implementation" in one form or another, a "cunning multi-move" may work, as a result of which the neo-Bandera Ukraine-anti-Russia will be "decomposed from within" and turn into something acceptable as good neighbor for our country, I can only envy such boundless naivety. It should not be forgotten that the “non-destructive” model of 2015 and what it has become now are, you know, somewhat different things. Let's take at least one specific aspect - its legislation.

How about renaming the main streets of Donetsk and Luhansk into avenues not for the night if Bandera and Shukhevych are mentioned? And it will. What can you say about the complete destruction of all Soviet (and Russian) symbols and place names on the territory of the current DPR and LPR? And it certainly will be! Linguistic self-determination? Do not make me laugh! They will hold a "referendum" with the "correct" numbers obtained in the same way as "90% of Ukrainians who are ready to resist the Russian invasion with weapons in their hands" - and hell! Everything else will be exactly the same. And if not, then much tougher, bloodier and more radical. Kharkiv and Odessa, too, you know, were not inhabited by Bandera in 2014 - and look at them now. Yes, and here's something else - very interesting: can anyone, except for persons with a sick imagination who write scripts for Netflix, imagine in the same session hall of the Verkhovna Rada "veterans of volunteers" and yesterday's Republicans - defenders of Donbass? But, in theory, this is how it should be ...

But this will not happen - never and under no circumstances.

I won’t say it again that the entry of representatives of the DPR and DPR into the Ukrainian, sorry for the expression, “politicum” for its “reformatting” is as plausible as veterans of the XNUMXst Ukrainian and XNUMXnd Belorussian fronts marching in the Victory Parade in the same standing with Vlasovites and geeks from the SS-Galicia division. Let's focus on other issues. What will you order to do if the DPR and LPR become part of Ukraine to those of its citizens who have already received Russian citizenship? After all, in this case we are not talking about hundreds or even thousands of people. Is our government ready to provide all these people who will inevitably find themselves on Russian territory in the position and status of refugees with shelter, food, employment and everything else?

Another aspect is what will happen to those enterprises of Donbass, in which many billions of rubles were invested last year alone - Russian rubles, by the way? Let's make a luxurious gift to Zelensky and his gang? Or Rinat Akhmetov, once again recognizing him as a "pro-Russian oligarch"? How will all the actions of the Russian side on economic support of the Republics, such as the opening of domestic markets for their goods, and so on? Such questions can be asked ad infinitum, but the main thing here, of course, is something else. The events in Belarus, Kazakhstan, the earlier resolution of the conflict over Nagorno-Karabakh more than clearly showed the world (and, above all, the countries of the “post-Soviet space”) the viability of Russia as a peacemaker and guarantor of security. The surrender of Donbass will put an end to all these foreign policy achievements. And there is no doubt that the execution of "Minsk" in reality will be just a surrender.

It is clear that now the Kremlin is forced to constantly repeat about “commitment to the Minsk agreements” and demand that Kiev comply with them. However, in this situation there is a huge risk of being trapped, from which there will be no way out. First of all, it should be understood that both Herr Steinmeier and all the participants in the Normandy format (not to mention the United States and Ukraine) while promoting the “peace settlement” agenda, do not care about the inhabitants of Donbass at all. And certainly not for the good of Russia. Rather, it is exactly the opposite. Among other things, when the topic of the “conflict in the East of Ukraine” is somehow closed, no one will leave our country alone – neither with sanctions, nor with everything else. All this brethren, with renewed vigor and being inspired by the success achieved, will take up the “Crimean issue”. What are we going to do here? Give up too? And that's just not necessary to talk about the fact that "this is another matter." Everything is the same thing, with all the same interested parties. Now, apparently, they are trying to slip us some kind of "rotten" deal with the next "guarantees" on Ukraine, not worth a damn and far-reaching negative consequences.

Based on the foregoing, only one reasonable conclusion can be reached. Russia urgently needs to prepare its own alternative scenario in case Kiev starts “implementing the Minsk agreements” in the American style. To all appearances, this is exactly what is going on, and by definition, such a process cannot end in anything good for our country.
Ctrl Enter
Noticed oshЫbku Highlight text and press. Ctrl + Enter
Reporterin Yandex News
Reporterin Yandex Zen
28 comments
Information
Dear reader, to leave comments on the publication, you must sign in.