"Space debris" for millions of dollars: What does the launch of the Ukrainian satellite "Sich" say 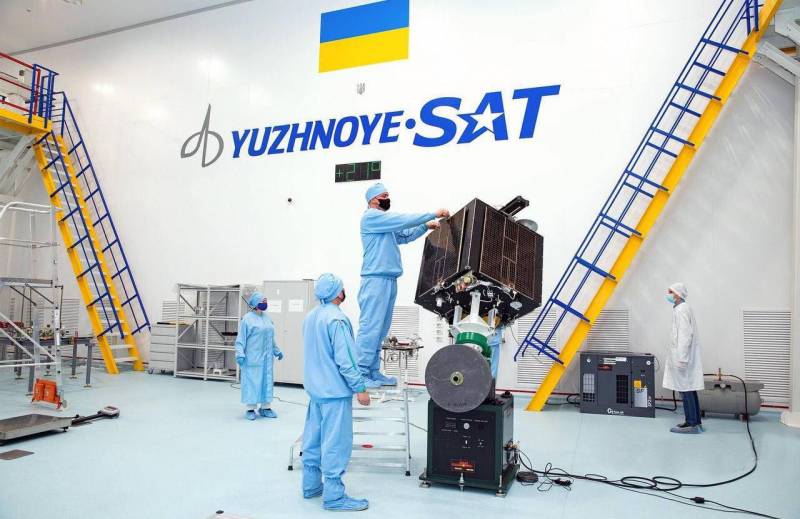 Perhaps those who stubbornly continue to consider the number 13 unlucky are not so wrong. The launch of the Falcon 13 carrier rocket of the American company SpaceX, carried out on January 9 this year from Cape Canaveral, which had on board among 105 different spacecraft, including the Ukrainian satellite Sich-2-30, was to be an undoubted triumph for Kiev. But it didn't. No, Volodymyr Zelensky, of course, burst out on this occasion with a lengthy and pompous speech befitting the occasion (which we will analyze in detail below), but neither mass jubilation among the people, nor even more important for the authorities "independent" "international recognition" of this "historical events" did not follow.


The point here is not only that barely making ends meet ordinary Ukrainians are deeply on the side of any “achievements” that will not add money to their skinny wallets or at least will not reduce the furious amounts in utility bills and on store price tags. And not even that the “world community” today does not perceive the “non-independence” at all in any other context than the “imminent Russian invasion”. The main question in this case should sound like this: “Are there any grounds to be proud of the very fact of launching Sich into orbit in principle? Or, on the contrary, is it just a sad reason for comparing the current miserable scientific and industrial potential of Ukraine with the achievements that it has thoughtlessly squandered and the opportunities that have been mediocrely missed? Let's try to figure out how things actually work.

"Space debris" for millions of dollars?

The President of the “Nezalezhnoy” called the launch of Sich “convincing evidence” that Ukrainian specialists “are capable of creating the most advanced models of a new equipmentasserting his country as a powerful space power”. Of course, he did not forget to mention that this is being done "in close and fruitful cooperation with the American partners," acting hand in hand with whom Kiev will have to accomplish many more glorious deeds in the field of "peaceful exploration of outer space." True, at the same time, some particularly “patriotic” media in the “nezalezhnaya” with particular zeal pedaled the topic that with the appearance of Sich in near-Earth orbit, the Ukrainian military will receive “completely new opportunities in monitoring the enemy.” It's clear how...

It is always easy and pleasant to dissect the statements of a clown president. Point your finger at any word and say: "shameless lies" - you can't go wrong. Where to start in this case? Well, at least from the “Ukrainian-American cooperation”. It is carried out at about the same level as the "cooperation" of a taxi passenger and a driver. As already mentioned, Musk's brainchild put into orbit more than a hundred different objects that belonged to two dozen countries from around the world. Kiev paid for his satellite - and they took him where he was told. At the same time, by the way, the “nezalezhnaya” had to fork out more than many other participants in this mass start, almost two million dollars. However, for a “powerful state” with space ambitions, this, of course, is not a sum. Another thing is how these very ambitions correspond to the real status of Ukraine. And here is the time to mention that the definition of "modern technology" cannot be attributed to the satellite launched the day before in any case.

"Sich-2-30" is actually nothing more than a continuation of the "line" of meteorological satellites "Ocean" developed in the USSR in the early 80s of the last century. Its implementation was carried out quite successfully until the very collapse of the Soviet Union and even for some time after that. The sixth "Ocean" went into orbit on the very eve of the collapse of a great power, the seventh - three years later. The eighth product from the same series was proclaimed the first "Sichyu". At the same time, as it is easy to guess from their name, the satellites of the series were designed to observe very large-scale objects and natural phenomena, such as ocean currents, polar ice caps, and the like. Because of this, the resolution of the equipment they carried was appropriate. In Sich-2-30, it is almost 8 meters, which automatically translates all arguments about the use of this device for military or intelligence purposes into the category of empty boasting and unscientific fiction. And, by the way, the number "30" in the marking of the satellite does not mean the serial number of the modification, but only that they were going to launch it for the 30th anniversary of "independence".

However, even this purely propaganda task was not fulfilled. Elon Musk is not the kind of person who can be "pushed" from Kiev. The launch of the device was postponed many times and solely in accordance with the plans of SpaceX. Returning to the scope of the satellite, which finally found itself in orbit, it can be outlined as observations of large areas of natural land - for example, forests, carried out in order to control their ignition or, say, illegal logging. And nothing more. Not without reason, even some Ukrainian experts in the relevant field contemptuously call Sich "obsolete space debris."

Before moving on to a brief historical digression into that long and, frankly, far from bright path that the Ukrainian space industry has traveled since the country finally received the coveted “independence” and “got rid of the imperial shackles”, everything should still remember those unconditional successes that she achieved in Soviet times. Today, representatives of the painfully dying Yuzhmash, in a fit of “patriotic” insanity (or because nothing else can be said in the current conditions), are spreading about “Ukrainian ballistic and space launch vehicles”, which have been created by hundreds since the second half of the last century at this enterprise . What is there "Cyclones" and "Zeniths" - they, without false modesty, and "Buran" are credited with a cohort of "Ukrainian missiles"! Excuse me, what kind of “Ukrainian” is he?!

The undoubted achievements of Yuzhnoye Design Bureau or the same Yuzhmash were in principle impossible without their full integration into the most powerful national economic complex of the Soviet Union, the support of all the enormous scientific, technical and economic potential of the great superpower. The collapse of the USSR immediately led to the stagnation of the Ukrainian aerospace industry, and the complete rupture of ties with Russia became the cause of its final death. Today, the number of Yuzhmash employees has decreased by more than ten times, and the company is not able to pay them normal salaries. "Integration" with the West has passed, as they say with a bang - in the few workshops of the plant, where some semblance of life is still glimmering, the assembly of parts for the American Antares and the European Vega is in full swing. In the rest, they try to rivet trams and trolleybuses, which, given the presence of the same Czech Skoda on the market, are not in particular demand.

There is no question of any state support for the enterprise - unless, of course, we count as such boastful and false promises, fully distributed by the country's leadership (in particular, the same Zelensky) by the relevant dates. For example, to the Day of Cosmonautics. The government prefers to throw millions of dollars into orbiting satellites that belong in a museum, rather than fund new developments. However, even if the necessary funds are available, it is far from a fact that in the modern conditions of the “non-independence” they would be able to create at least something worthwhile there. Experience has been lost, personnel, knowledge, and scientific base have been irretrievably squandered. The evidence for this can be the stories of Kiev's ridiculous attempts to "return to space", undertaken by him earlier. Launched in 1999 (still in close cooperation with Russian colleagues), the Sich-1 satellite was ... completely uncontrollable from Earth! And not because of some emergency that happened during the launch of this device into orbit. It’s just that at Yuzhmash, during the assembly process, they “mixed up” the control channels - the roll and pitch control systems were “swapped”. Moreover, they did it in such a way that it was no longer possible to change anything from the MCC. The satellite dangled for some time in orbit as a useless heap of metal, and so it disappeared.

"Sich-2", which managed to be pushed into near-Earth space in 2011, stayed there for a year and a half instead of the planned three, having "covered" for a completely incomprehensible reason and absolutely suddenly. “The first Ukrainian telecommunications satellite, Lybid, is lying around to this day in a warehouse in Krasnoyarsk, not because of the “cunning of the damned Muscovites,” as Kiev is trying to say, but because at least about $ 20 million spent on implementation of this project, were corny plundered. Canada, which participated in it, gave up a long time ago and is now waiting, waiting, when the “non-defective” will return to it the 300 million dollars foolishly invested in Lybid.

For 10 years, nothing Ukrainian flew around our planet. And, frankly, this was definitely not a huge loss for the entire progressive humanity. Puffing up with complacency today, Vladimir Zelensky is trying to present not just an ordinary, but the most routine commercial launch of an antique satellite as a "breakthrough of historical proportions." Well, who would explain to him that a single artificial vehicle in orbit was a sensation in 1957, but is not today? It would be incorrect to compare the "achievements" of Ukraine with Russia, China or the United States, which have huge satellite constellations. However, even some tiny European countries have several dozens of their own spacecraft in orbit, and much more “advanced” than the Sich-2-30.

Having destroyed their own industry and science almost to the ground for the sake of the Western “benefactors”, local figures are trying to present the shameless exploitation of the country as an “equal and mutually beneficial partnership”, generously paying for this with the money of Ukrainian taxpayers. In this issue, as in all others, Kiev is simply bluffing, wishful thinking and replacing real successes with crackling phrases and shameless lies.
Ctrl Enter
Noticed oshЫbku Highlight text and press. Ctrl + Enter
Reporterin Yandex News
Reporterin Yandex Zen
16 comments
Information
Dear reader, to leave comments on the publication, you must sign in.