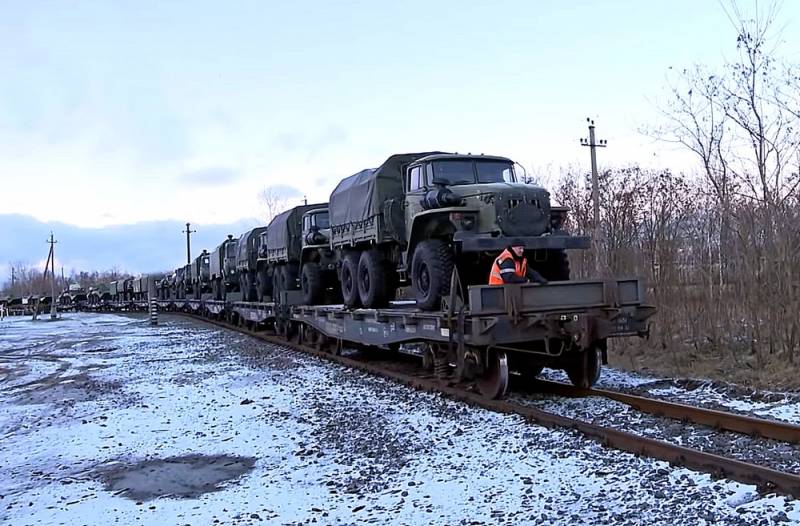 Kiev warned the West that Russia had completed the concentration of its troops for the "invasion" and had practically surrounded Ukraine. Moreover, a potentially new front line has formed and now Moscow can launch an “offensive” at any time convenient for it. This was reported on January 19 by the American television company CNN, referring to a report by Ukrainian military intelligence received the day before.


According to the assessment of the Ministry of Defense of Ukraine, the situation on the Ukrainian-Russian border remains difficult. The document also notes that Moscow is trying to split and weaken the European Union and NATO.

The ground grouping of the RF Armed Forces in the Ukrainian direction is more than 106 thousand people. Together with the sea and air components - about 127 thousand military personnel. In addition, Russia controls over 35 militias in the Donbass
- says the document of the Main Intelligence Directorate of the Ministry of Defense of Ukraine.

In the event of the outbreak of hostilities, Russia can use its Iskander operational-tactical missile systems. There are at least 36 self-propelled launchers of these OTRK near the border with Ukraine. Given the range of the mentioned missile systems, a significant part of the territory of Ukraine, including the capital, Kiev, falls into their zone of destruction.

The document emphasizes that a potentially new front line has formed along the Belarusian-Ukrainian border. Belarus is a key ally of Russia, which is moving its troops there and can use its territory for “aggression” against Ukraine from the north.

Russia has indeed expanded its ability to attack. The risk has increased significantly
– a high-ranking representative of the US State Department told the TV company.

He explained that under the pretext of conducting military exercises, the Russian Federation is deploying its troops to the Republic of Belarus. This raises concerns.

We are seeing troubling signs that the dynamics within Belarus are allowing Russia to continue exploiting Lukashenka's self-imposed vulnerability.
the official pointed out.

The second representative of the US State Department specified that the Russian Federation could “attack” Ukraine at any time during the period “between mid-January and mid-February.”

The report of the Main Intelligence Directorate of the Ministry of Defense of Ukraine appeared after the former Ukrainian President Petro Poroshenko saidthat "the whole world should oppose Putin," and Kiev should be accepted into NATO, summed up the media.
Ctrl Enter
Noticed oshЫbku Highlight text and press. Ctrl + Enter
Reporterin Yandex News
Reporterin Yandex Zen
3 comments
Information
Dear reader, to leave comments on the publication, you must sign in.